Harlan Hill is being attacked on social media for something the Left routinely gets away with. He was banned from returning as a guest on Fox News for his tweet about Democratic vice presidential candidate Sen. Kamala Harris.

Harris sparred with Republican incumbent Vice President Mike Pence in a debate Wednesday night at the University of Utah in Salt Lake City, and Hill let everyone on social media know exactly what he thought of her performance. 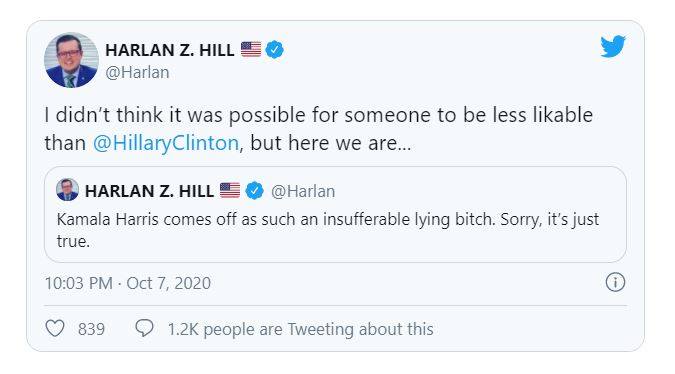 According to Business Insider, Fox made it clear that Hill — a member of the advisory board to President Donald Trump’s re-election campaign, according to his bio — would not be welcome back on the air because of his remark.

By the time Fox responded, Hill already had been chastised by a Twitter mob, many of whom accused him of being intimidated by a strong woman or other such nonsense.

……Hill was right that Harris was shrill, sophomoric, deceitful, and manipulative and that her debate performance was just abysmal — and few could dispute the Clinton comparison.

Many viewers indeed found Harris abrasive, condescending, and unlikable, so the spirit of the tweet was spot on……

Even after the Leftwing mob threw a hissy fit, Hill doubled down:

……“You could literally throw a stone at the MSNBC bureau over on Capitol Hill and you’ll hit someone that has called Trump ‘Hitler,’ a ‘Nazi,’ all kinds of nasty names on Twitter, and there’s zero consequence for them,” Hill told host and editor-in-chief Raheem Kassam, comparing the row over his single Harris tweet to the way the media habitually attack President Donald Trump.

Hill maintained that his tweet was “hyperbole” but said he found Harris “abrasive and nasty, and rude to the vice president, and she did lie repeatedly, repeatedly, to the American people and to the moderator.”

Hill’s comments pale in comparison to the vileness, filth, derangement, pornographic insults,  sickening comments about a child with Down’s Syndrome, and the incessant gutter speech which is hurled at conservative women from the leftard lowlifes.  All that pretense about being a female-friendly touchy-feely political faction is bullshit.

They want a war with lopsided rules.  Sorry ’bout that shit.   We, on the right side of the political spectrum, will not back down or be intimidated by malfeasant, boorish, scat-mouthed Prog windbags. We fight blow for blow.

They got a taste of their own medicine. Tough.