The organizer of Wednesday’s massive protest against Michigan Gov. Gretchen Whitmer’s coronavirus-induced restrictions told “Your World” Wednesday that the governor’s executive orders have been unduly onerous and tyrannical.

“Almost all of the people got into their cars with the people that they have been sheltering with, packed a snack, drove to Lansing to show their protest,” she said. “The most fun that they had was in the last 48 hours making signs.

“I have to admit, it felt a little fun for a few minutes, because it has been so depressing,” Maddock added. “Michigan has been just under tyranny. We had to lay off seven employees of our own.

“When you look into these cars … you see a bookstore. You see a coffee shop owner, a small insurance agency owner, a paint store owner, landscapers, bricklayers, I could go on and on,” Maddock continued. “These are real people with real families and bills to pay. They have mortgages to pay.”

She criticized Whitmer for wearing a custom-made “That woman from Michigan” T-shirt during an appearance on Comedy Central’s “The Daily Show” earlier this month and wondered how unemployed workers felt about the stunt.

I wonder how the people in that state feel about the fact that they elected that turd. 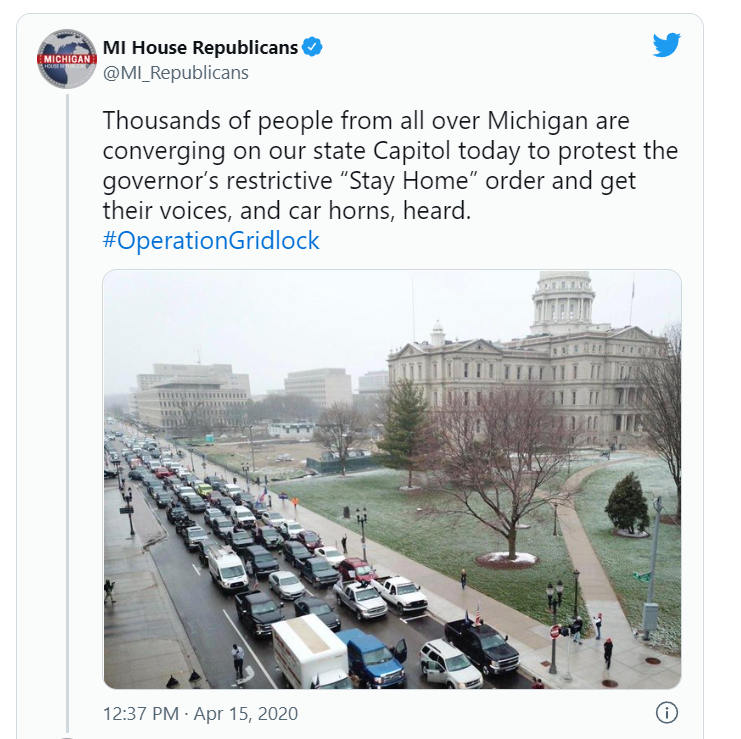 At least a few law enforcement officials have common sense:

A group of sheriffs announced they will not enforce some of Democratic Michigan Gov. Gretchen Whitmer’s executive orders on the same day thousands rallied against state-mandated shelter-in-place orders outside the state Capitol in Lansing.

Sheriffs Mike Borkovich, Ted Schendel, Ken Falk, and Kim Cole of Michigan’s 101st District released a press statement Wednesday afternoon detailing what they said was their decision to place their oath to the Constitution above Whitmer’s wishes.

“We write today to inform the public for our respective counties of our opposition to some of Governor Whitmer’s executive orders. While we understand her desire to protect the public, we question some restrictions that she has imposed as overstepping her executive authority,” read the letter signed by each sheriff.

Hundreds of thousands signed petitions and joined online groups to voice their frustration with Whitmer’s orders and to organize protests. Whitmer enacted the stay-at-home policy on March 22 and has been met with criticism from small-business owners and the unemployed.

“People are basically being told what they can and can’t buy at stores,” said Matt Seely, a member of the Michigan Conservative Coalition who rallied outside the state Capitol. “Nothing makes sense. You can buy a bottle of liquor, but you can’t buy a gallon of paint.”

The four sheriffs promised to continue abiding by social distancing guidelines as they attempt to reopen parts of Michigan that have not been affected as badly as the Detroit metro area, where more than 20,000 cases have been reported.

“Our focus needs to be on reopening our counties and getting people back to work. We also need to be aware that this virus is deadly and that we need to continue to practice social distancing, washing of hands, wearing of masks as well as other medically recommended measures.” 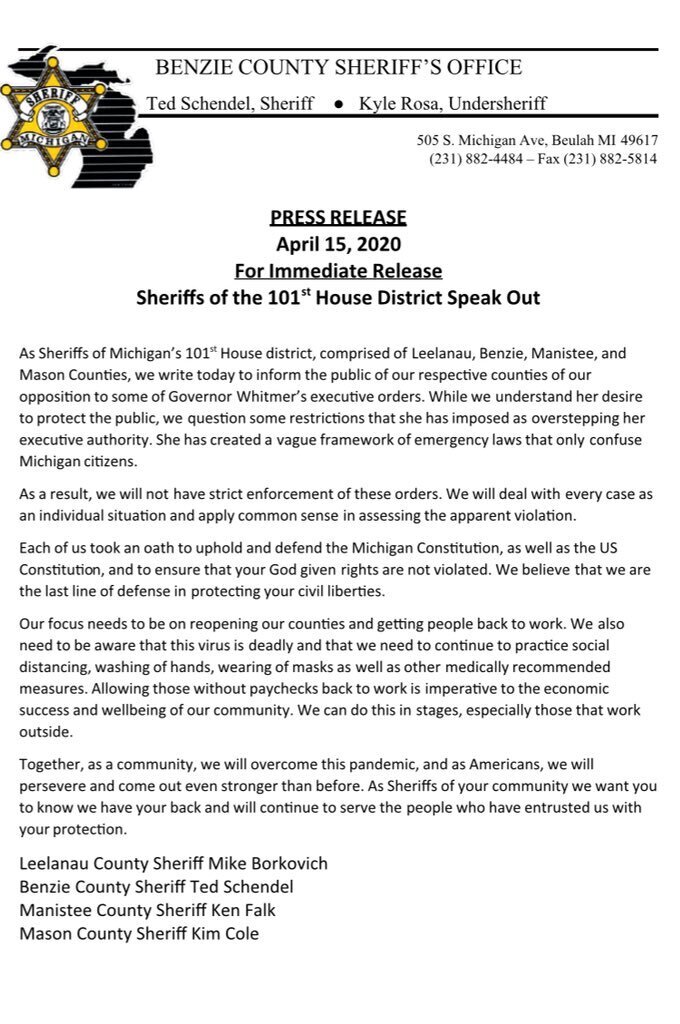 The American people are fed up with this shit; at least the ones who recognize the ominous signs of a totalitarian state. This happens with third-world dictatorships and communist and socialist regimes, not a constitutional republic. Who the fuck are they to tell us that our “rights have been suspended“.

The corona virus will come and go.  But the government will never forget how easy it was to take control of your life; to control every event, restaurant, sports facility, classroom, church, and even if you are allowed to leave your house. Remember that the next time they manufacture a crisis.

I am sticking to my normal routine. I go to the store, visit friends, and go out and about as I wish.

When this is all over, the politicians who pushed this frantic behavior will forget all about the rights they violated and the economic damage they caused with their abuse of power. We won’t.