His blood is on the hands of Nancy Pelosi, Joe Biden, Chris Wray, Liz Cheney, and the corrupt DOJ.

Matthew Perna did nothing wrong on January 6, 2021.

The Pennsylvania man walked through an open door on the Senate side of the building shortly before 3 p.m. that afternoon. Capitol police, shown in surveillance video, stood by as hundreds of Americans entered the Capitol. Wearing a “Make America Great Again” sweatshirt, Perna, 37, left after about 20 minutes.

Less than two weeks later, Perna was ensnared in what the former top U.S. prosecutor called a “shock and awe” campaign to round up Trump supporters and deter them from demonstrating at Joe Biden’s inauguration on January 20, 2021. After he discovered his image on the FBI’s most wanted list for January 6, Perna immediately contacted his local FBI office and voluntarily submitted to questioning; on January 18, six FBI agents arrested Perna at his home.

His life from that point turned into a nightmare. Perna was indicted by a grand jury in February 2021 on four counts including obstruction of an official proceeding and trespassing misdemeanors. Despite his nonviolent participation in the events of that day—he did not assault anyone, carry a weapon, or vandalize property—Biden’s Justice Department and local news media nonetheless made his life pure hell.

Whenever his hometown paper, the Sharon Herald, published an article on its social media account about Perna, the majority of replies were “horrible and brutal,” his aunt, Geri Perna, told me on the phone Sunday. After more than a year of legal and public torture, Perna saw no way out.

On Friday night, Matthew Perna hung himself in his garage.

“They broke him, they mentally broke him,” Geri said through racking sobs as she explained why her loved one ended his life. “He had run out of hope. I know he couldn’t take it any more.”

In December, at the behest of his defense attorney, Perna agreed to plead guilty to all four counts. With no criminal record and no violent conduct on January 6, Perna and his family expected a prison sentence of less than a year; Perna’s sentencing hearing was scheduled for March 3, the seven-year anniversary of his mother’s death.

But Matthew Graves, the U.S. Attorney for the District of Columbia handling every January 6 prosecution, intervened and asked the court to delay Perna’s sentencing so his office could make sure Capitol defendants are punished equally. “While every case and every defendant are different, the Government is attempting to ensure that similarly situated January 6 defendants are treated in the same manner,” Graves wrote in a motion on February 11. “The Government is attempting to do that in this case and that requires additional time for the Government’s internal review process to be completed.”

This was very bad news for Perna. Graves’ office has sought lengthy prison terms for defendants who plead guilty to the obstruction felony. In the case of Jacob Chansley, who, like Perna, committed no violent act on January 6 and was allowed into the building by police, Biden’s Justice Department sought 51 months in jail and three years probation. (Judge Royce Lamberth sentenced him to 41 months.)

……Perna is at least the second known suicide of a January 6 defendant and in September, another defendant, John Anderson, died unexpectedly. His attorney, Marina Medvin, condemned the Justice Department’s false case against her client and in a statement said he “died a wrongly accused man who maintained his innocence to his last day.”

This is what he did. 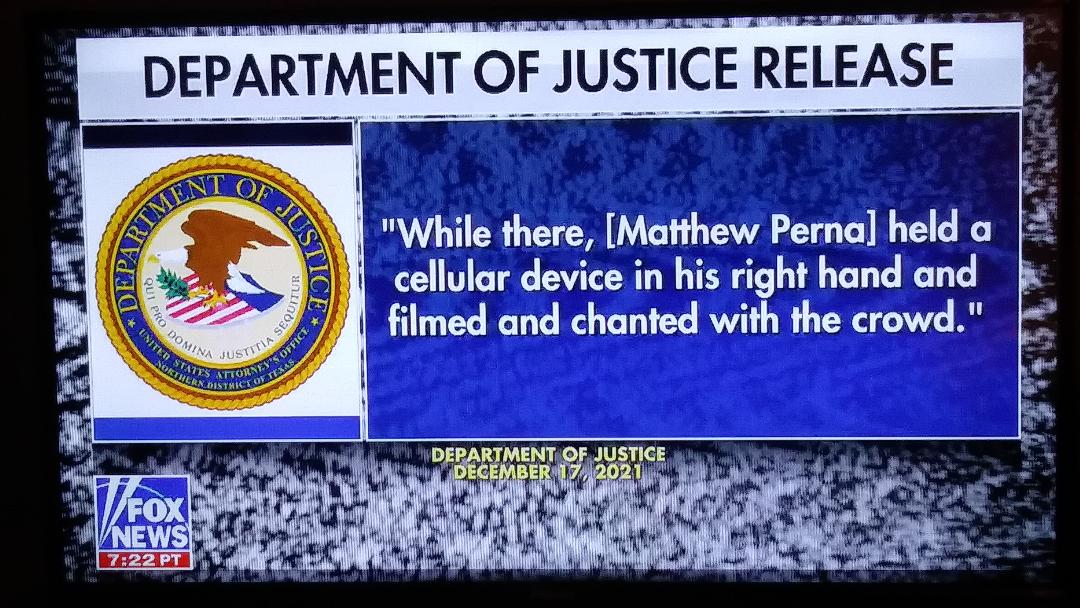 For exercising  his rights, he was hounded to death.

American political prisoners have been held for more than 8 months in solitary confinement in 7X10 cells for 23 hours a day. These people have not been convicted of any crimes, they are being held in “pretrial detention” for trespassing the capitol halls of corruption on 6 January 2021. Their trials have not been set. They have been denied bail. They are not allowed to meet with lawyers in private. They have one hour a day for “exercise”, showers, and phone calls. They have been denied due process.  The jailed protesters have been beaten and isolated by the guards.  Lawyers for one, a man called Ryan Samsel, say he was beaten so badly he has a skull fracture and is now blind in one eye. One of them died awaiting trial.

Yet, the Antifa/BLM goons responsible for the destruction of neighborhoods, businesses, police stations, and courthouses, have skated out of any legal consequences for their crimes.  The Feds refuse to prosecute.

Matthew Perna is the latest victim of Biden’s jackbooted autocracy.

Unless or until America stands up to this, the authoritarian government brutality will continue. If you don’t think it affects you, just wait.