A senior U.S. commander in Afghanistan apologized on Wednesday for a “highly offensive” propaganda leaflet that contained a passage from the Quran used in the Taliban militants’ banner superimposed on to the image of a dog.

The dog is considered unclean in Islam and associating an image of the animal with one of the religion’s most sacred texts prompted indignation.

……The image, distributed by U.S. forces in Parwan province, north of Kabul on Tuesday, showed a white dog with a section of the Taliban’s banner superimposed on its side fleeing from the lion. The banner contains a passage from the Quran in Arabic.

Above the picture of the lion and the dog, the leaflet urged people to report insurgents to the authorities.

“Take back your freedom from the terrorist dogs and cooperate with coalition forces so they can target your enemy and eliminate them,” it said.

……“The design of the leaflets mistakenly contained an image highly offensive to both Muslims and the religion of Islam. I sincerely apologize. We have the deepest respect for Islam and our Muslim partners worldwide,” said Major General James Linder in a statement.

Too bad we don’t get apologies from muzzies whenever one of their filthy pigs kills a U.S. service member with an ‘insider attack’.

During Obama’s regime, the gutless wonders in the hierarchy ordered the scrubbing of any “anti-Islamic” material from training manuals and busied themselves with removing any vestiges of common sense and warrior ethos from the United States Army,  while the Islamic-inspired enemy killed us.

The insane kowtowing to Islam reared its ugly head in the form of a draft Army manual, which lists “making derogatory comments about the Taliban,” “advocating women’s rights,” “any criticism of pedophilia,” “directing any criticism towards Afghans,” “mentioning homosexuality and homosexual conduct” or “anything related to Islam”, as “taboo conversation topics” that Soldiers should avoid.  Can you imagine the Army leadership in WWII concocting a piece of tripe that instructed Soldiers “not to be mean” to the Nazis, Imperialist Japs, and Fascist Italians?  Patton and MacArthur are spinning in their graves.

There was a glimmer of hope that this stupid, suicidal shit would change with Trump and Mattis in charge, but it looks like we’re back to this: 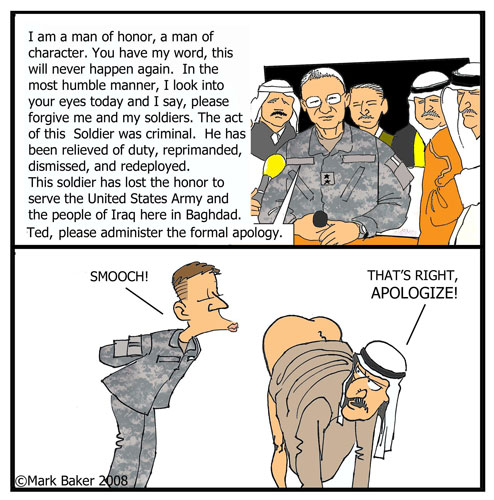