“Rep. Hamann’s comments demonstrate that he has joined the ranks of the radicalized in the Democrat Party. After these public comments, including a threat on President Trump’s life, House Speaker Sara Gideon should demand his resignation,” Jason Savage, executive director of the Maine GOP, told LifeZette. “The good people of his district and across Maine deserve better than violent threats against our commander in chief.”

The rant included several insults hurled at supporters of the president, along with the popular Democratic conspiracy theory that Russians were solely responsible for Trump’s election.

……”The best way I can describe these comments is simple: unhinged and dangerous,” said Maine GOP Chair Demi Kouzounas in a statement.

“Words cannot even begin to describe the level of revulsion I feel after reading Representative Scott Hamann’s recent tirade that has come to light,” Kouzounas’ statement continued, “Perhaps the most alarming aspect of this tirade is an implied death threat against our president.”

“I not only call on, but demand that Speaker Sara Gideon actually do something about her unethical and radicalized caucus. Is this language and behavior that she is willing to accept from Democrat Representatives?” asked Kouzounas. “She has a choice to make. I know what mine would be if I were in her position.”

Here’s the rant from the unhinged twatwaffle: 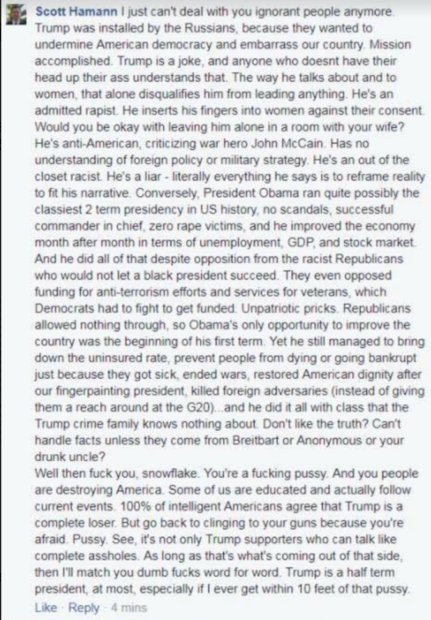 When he got backlash, he posted this: 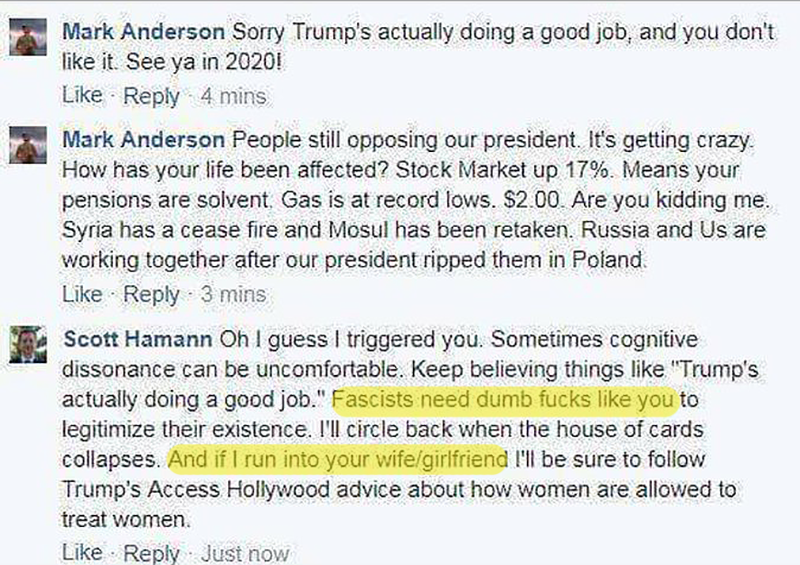 The feelings are mutual, snowflake. We hate every inch of your rancid guts. You’re a bunch of chickenshits who hide behind computers and wear masks with ‘antifa’ thugs on the streets while you vandalize local businesses because they’re owned by people who work for a living.
You must have been smoking some hellacious crack for eight years to claim that Obama was “classy” with “no scandals” and “improved the economy”.
Anyone who studied Obama’s personality, Marxist philosophy and background, would have understood that  he was totally unfit to lead a Democratic Republic.
The arrogant Marxist moron engaged in the wanton destruction of our free-market system and demonized business owners.
He rammed ghastly legislation through Congress in the form of ObamaCare, he repeatedly violated the U.S. Constitution, spent billions of tax dollars on “green” eco scams, seized 2/3rds of the auto industry, embraced the “Occupy” thugs, and chummed around with union racketeers who make threats and commit violent crimes.
The ObamaCare Frankenstein which caused millions of people to lose the affordable health care they already had,  has imploded.
He lied about and covered up the ‘Fast and Furious’ gunrunning operation, and started another gunrunning operation in Syria.
He systematically released muzzie terrorist cutthroats from Gitmo, and traded five of the worst for a deserter.
He commuted the sentence of traitor Bradley Manning who leaked classified information that endangered the lives of fellow Soldiers.
Thanks to Obama the ISIS “JV Team” has gone varsity.
His (and Hillary’s) depraved indifference toward the embassy staff in Benghazi resulted in the deaths of four Americans, including the Ambassador.  He lied about the terrorist attack, and  disrespected the military and their families.
He paid $400 million to Iranian despots for hostage ransom.
Obama signed executive orders which were in full violation of the law.
His regime conducted IRS targeting of Tea Party groups.
His NSA used blanket, indiscriminate spying on American citizens.
He directed the DOJ to harass reporters and tap into their phones and emails when they published information that exposed his criminal tendencies, depraved indifference and incompetence.
Obama figured he could do anything he wanted, which runs contrary to the Checks and Balances proscribed in the Constitution; a document he’s shredded after he took the oath of office.
He added $10 trillion to the national debt.
He damaged national security, gave aid and comfort to the enemy, and allowed muzzie terrorists to operate and form political groups in this country. He pandered to and supported Muslim Brotherhood terrorist facilitators. He is such a Dhimmi to the point where he managed to make Bin Laden’s demise look anti-climactic.
He got bitch-slapped by Vladimir Putin so often he was punch-drunk.
He back-stabbed Israel, the only real ally we have in the Middle East.
Obama was willing to overlook 55 years of Castro’s brutal dictatorship, and ‘normalize relations’ with his communist gulag.
For eight years this lying sociopath, divisive bigot, and muslim ass kisser  completely ruined America’s economy, foreign policy, national security, and world standing.  This inept self-absorbed narcissist kissed up to America’s enemies and made a complete ass of himself on the world stage.
Thanks to the sophomoric foreign policy of this half-wit, our national security and our position as standard bearer for a safeguard against the world’s malefactors,  was disgraced.
The fucking malfeasant belongs in prison, along with Hillary, Eric Holder, and Lois Lerner.
Fuck you, Hamann.  Fuck you and the rest of the DemProg shitstains who helped Barky damage this country. Can’t handle the reversal of Obama’s disasters? Tough shit. Don’t like the fact that fed-up Americans rejected the corrupt Hildabeast and Barky’s legacy?  Eat shit.
Do the world a favor and jump in front of a fucking train. Take Nancy Pelosi with you.

My guess is that nothing will happen to this asswipe. The Dems always cover for their own.