Since the Roe v Wade decision, liberal fruitcakes have gone ballistic with threats and violence.

Liberals: “January 6th was an act of terrorism”

Liberals: “Not getting vaccinated is an act of terrorism.” 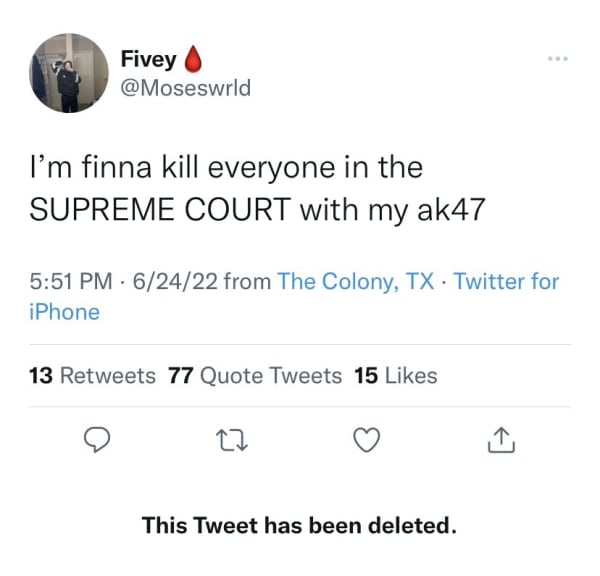 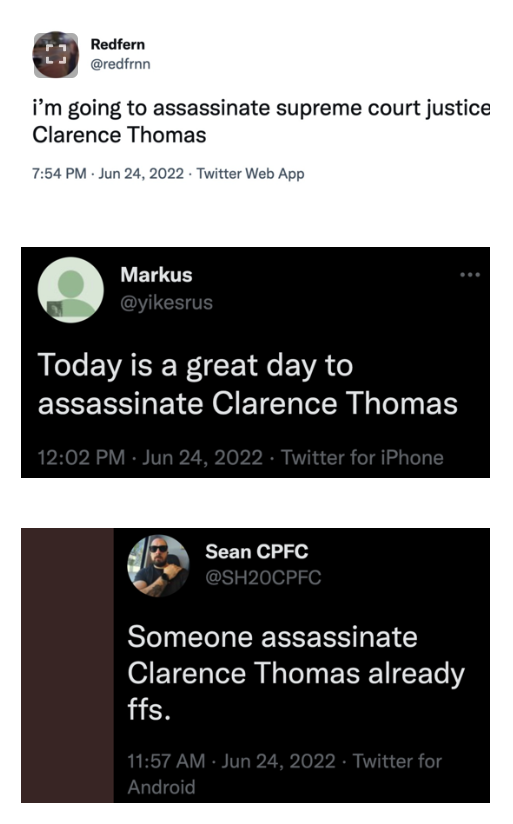 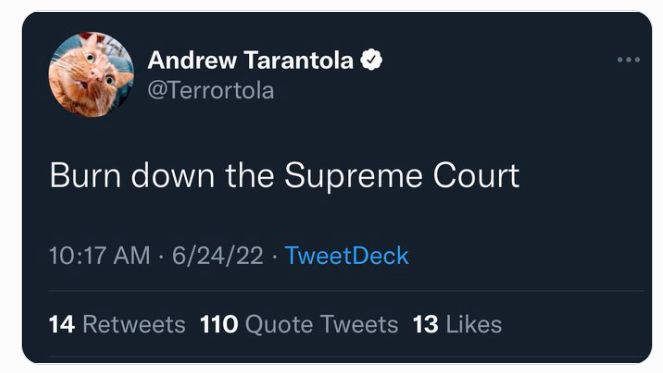 Liberals went from Jan 6th was “the worst attack in history” to “burn down the Supreme Court”.  Can’t make that shit up. 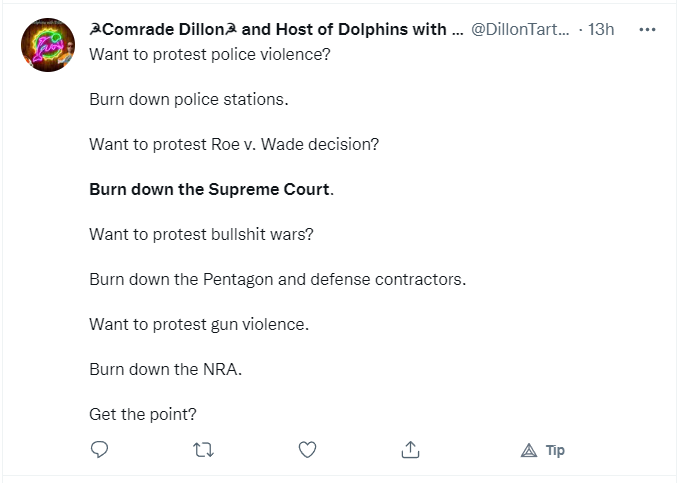 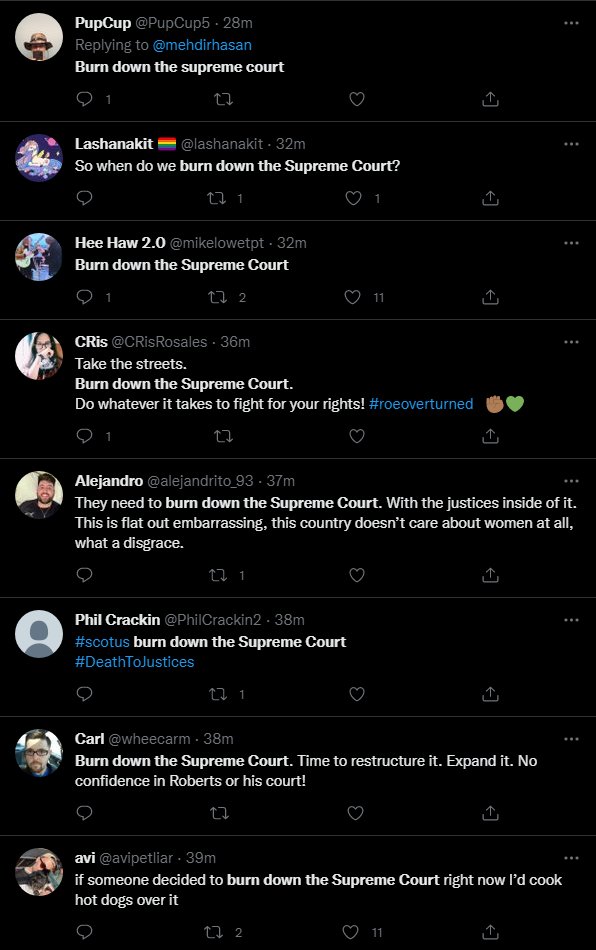 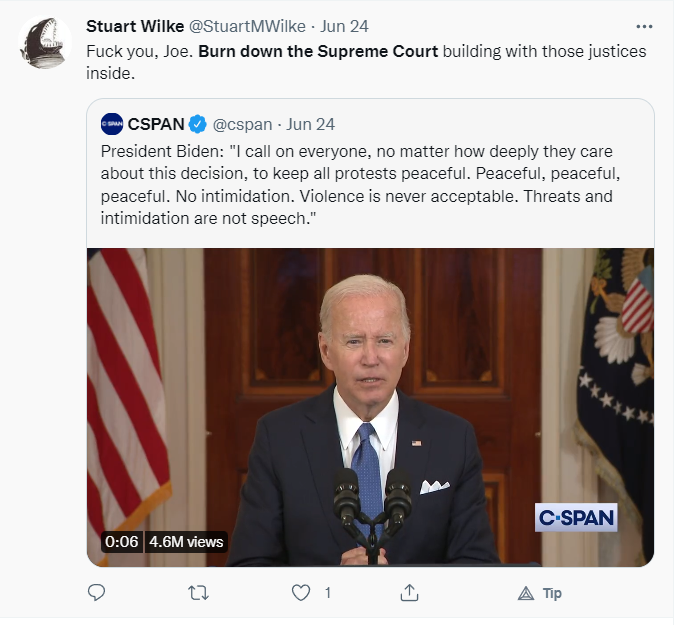 Don’t worry, cupcake. He doesn’t mean it. And neither does the rest of his authoritarian party.

Foreign shitbags give their 2 cents:

Making threats of violence against anyone, including a sitting Supreme Court justice, can face felony charges.

“Individuals who communicate a threat to injure another can face federal felony charges if they use a form of interstate commerce, such as email, mail, phone calls, texts, or online messaging, to send the threat,” Criminal Defense Lawyer explains. “This federal offense carries up to 5 years in federal prison. (18 U.S.C. § 875.) Sending such threats repeatedly can lead to federal criminal stalking charges and up to 10 years in prison. (18 U.S.C. §§ 2261, 2261A.) Depending on the circumstances of the threats or the intended recipient, other federal penalties may apply.”

18 U.S. Code § 1507 – Picketing or parading
Whoever, with the intent of interfering with, obstructing, or impeding the administration of justice, or with the intent of influencing any judge, juror, witness, or court officer, in the discharge of his duty, pickets or parades in or near a building housing a court of the United States, or in or near a building or residence occupied or used by such judge, juror, witness, or court officer, or with such intent uses any sound-truck or similar device or resorts to any other demonstration in or near any such building or residence, shall be fined under this title or imprisoned not more than one year, or both.

Nothing in this section shall interfere with or prevent the exercise by any court of the United States of its power to punish for contempt.

And the libs’ racism is out in full force: 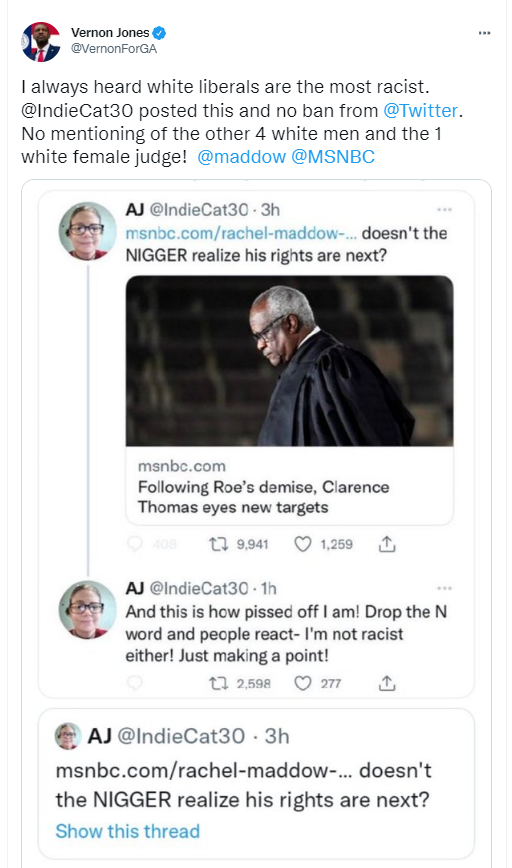 Threaten to burn down the supreme court and the DOJ turns a blind eye. But complain about your child’s indoctrination at a school board meeting, and the Feds will label you a domestic terrorist and arrest you.