The Canadian Freedom Convoy has spread to America. 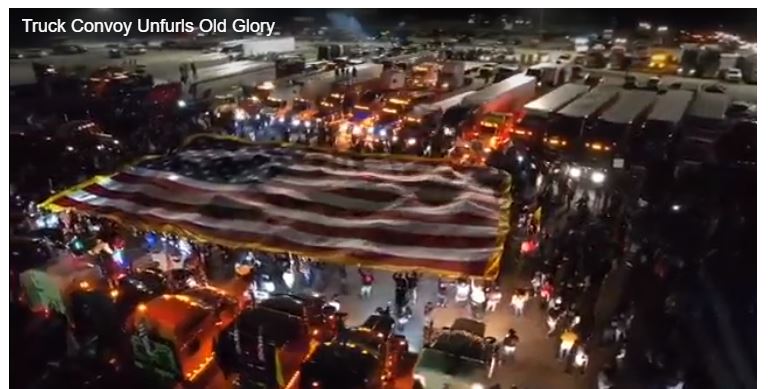 The convoy of patriotic Americans who set out to protest the authoritarian COVID policies that have been a fixture of Democrat rule has nearly reached their destination as the massive armada of vehicles arrived in Maryland where they received a hero’s welcome.

On Saturday night, truckers and others who made the nearly 2,500 mile journey from California were honored by supporters who gathered at the Hagerstown Speedway for a rally with fireworks, music and the unfurling of a gigantic American flag, the night before they would make the final leg of the journey to Washington D.C.

It was a jubilant scene at the speedway as ordinary citizens gathered in preparation of making their voices heard to a government that has not only become increasingly indifferent to their concerns but has turned openly hostile under the Biden administration.

The “People’s Convoy” which some have estimated to be as large as 30 miles long is expected to reach D.C. on Sunday where it will circle the Beltway in the protest that will stretch into the workweek, causing a potential gridlock nightmare for commuters including lobbyists, politicians and their staffers.

With the plan being for the caravan of trucks, RVs, cars and other vehicles to drive around the 64-mile highway that surrounds the city to send a message to lawmakers.

The Washington Post quotes Brian Brase who is identified as a convoy organizer that the convoy plans to “drive around the Beltway twice before returning to the Hagerstown Speedway, where the protesters have spent the weekend so far. Each day this week, the convoy will repeat that ritual until the group’s demands are met,”

“He said organizers are working with local enforcement to identify weekday times that would have a minimal impact on traffic. They will drive the minimum legal speed and increase the number of loops around the Beltway each day to pressure lawmakers and public officials,” the paper reported.

The 37-year-old Ohio trucker said said that Sunday “is a show of just how big we are and just how serious we are,” Brase said. “We’re going to be a huge pain,”

Another organizer teased the possibility that the White House could also be a destination, “I can tell you now that there will be select trucks going to the White House,” said organizer Dan Fitzgerald according to the Daily Mail. “I don’t want people thinking we are invading D.C. This is not the convoy going into D.C. commons. This is a few select drivers.”

Once known as a “shining city on the hill” but now viewed in a much less favorable light as “The Swamp” by tens of millions of Americans, the crime-ridden seat of the national government has taken a major hit as an inspiration to the “democracy” that cynical politicians pay lip service to while at the same time, cutting shady deals with special interests and selling their constituents down the river for chump change.

This week, they will hear from many of those alienated constituents.

They should create a huge barrier of semis around the fucking Swamp HQ at the capitol and use it as a parking lot until further notice.