“Every statue and street building has been renamed, every date has been altered. And the process is continuing day by day and minute by minute. History has stopped. Nothing exists except an endless present in which the Party is always right.” – George Orwell, 1984

So finally, justice has arrived. After all the rampant crime, the smash-and-grabs, the subway shovers, the brutal random murders of young women. Our leaders are finally doing something about it.

Late Wednesday night, a statue of Theodore Roosevelt…was removed after standing in front of the American Museum of Natural History for more than 80 years.

Yeah, instead of removing the vagrants who’ve been defecating, doing drugs and assaulting people, go after the inanimate stiff — that’ll make life better.

But hey, Teddy was evil. Those glasses, that mustache — he probably wore those as a disguise while he was beating up people of color.

So get lost, you jerk, and take your racist horse with you. And what a heroic feat to rid us of Teddy, or at least his statue — so typical of liberals to pick on something that can’t hit back.

By the way, the removal cost the city $2 million. So where are they sending Teddy to, private school? Antifa could have done it for free with ropes, with CNN looking the other way.

But where else would you like that money to go? For more policing in the subways or the streets where crime is rampant? Shut up, you bigot!

Did you know the statue was deemed so offensive they covered it with a massive orange tarp — the same one Brian Stelter uses as a towel in the steam room?

The monument’s now in a library in North Dakota. So like all residents fleeing New York to Florida, it’s probably safer.

In the New York Post, they quote one of Teddy’s descendants, Theodore Roosevelt V, who cheered the removal, saying the statue is being relocated to a place where its composition can be recontextualized to facilitate difficult, complex and inclusive discussions.

Well, thank you, you pretentious —–. If Teddy were alive, he dress you up like a white rhino and chased you through Central Park with a 12-gauge.

……But this is part of a larger problem. Americans care about crime. They don’t care about statues any more than they care about trans bathrooms or pronouns, but someone does.

It’s our craven leaders who are under the thumb of a tiny, woke mob. This, as crime explodes in every city run by libs. We hear the tragedies every day, but they don’t get the outrage you saw over statues in those heady days of the George Floyd riots, when statues were dropping like Jeffrey Toobin’s pants during a Zoom call. Never gets old.

Now, many were of Confederate soldiers toppled by protesters, but it didn’t stop there, and even the city leaders joined in, just as one guy predicted.

We didn’t deserve him. Protesters tore down statues of anti-slavery heroes, as well as statues of governors. They removed monuments honoring citizens who fought in the Union Army.

They trashed statues of the missionary Junipero Serra. That’s my high school — my school’s named after him. And they better leave my statue alone. I’m riding Tom Brady on horseback.

Of course, Columbus was removed in Chicago by Lori Lightweight. Black kids are getting shot by other black kids, and she’s like, “Let’s get that dead Italian out of here.” If only we had a visual aid to shed some light on these misplaced priorities.

So as crimes spin out of control, our media saw progress in this pointless purge.

Both Thomas Jefferson and George Washington were also knocked down in that town.

Then, they destroyed the city. Of course, there’s no correlation there.

Even Frederick Douglass wasn’t safe. He was torn down in Rochester, New York. Like Brian Kilmeade’s fleas, that’s a head-scratcher.

Gandhi, even Gandhi, was vandalized in Davis, California, and we all remember what a jerk he was.

And yet the media and our politicians thought it was progress that this would help cities and help people. But like what Disney did to “Star Wars,” they destroyed something and replaced it with something worse.

The crime in Dem-run cities has grown exponentially in New York City, Chicago, Atlanta and Seattle. 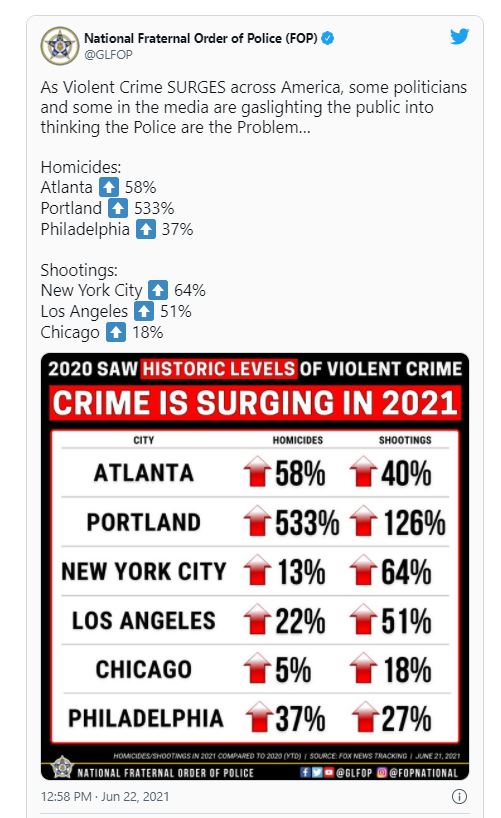 Some of it has been encouraged by Dem leaders.

And their “Defund the Cops” campaign resulted in a slew of murders.

The Democrats have controlled America’s major urban areas for over half a century, with disastrous results. Crime, poverty, and corruption are their trademarks.

But the most important issue at the top of their fucking list is removing statues of historical figures that trigger their delicate leftard sensibilities.

Over the last several years, BLM and Antifa retards vandalized a monument honoring a black union regiment, destroyed a statue of famed black abolitionist Frederick Douglass, tore down a statue of Col. Hans Christian Heg, an immigrant from Norway who died fighting for the Union against slavery, and defaced the statue of Mattias Bladwin, an abolitionist who fought against slavery.

If they want to tear down offensive statues, there are representations of communists, traitors, authentic racists, statues of malfeasant black politicians, and statues of pedophiles that should be dislodged and hauled off to a land fill.

They prefer to make a martyr out of a career criminal and erect busts of his fugly face instead.