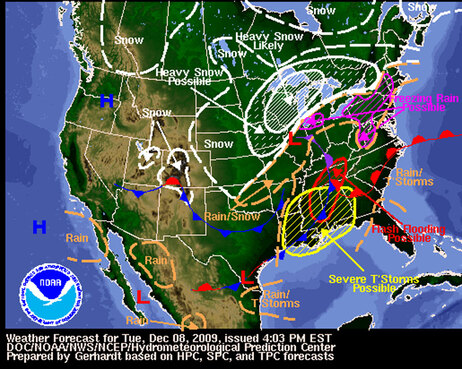 A major winter storm is sweeping across the nation, with bone-chilling temperatures, strong winds from heavy snows from northern Arizona and Colorado, east and north to the Great Lakes region and the Northeast beyond. Middle Atlantic and southern states can expect rain, sometimes heavy, from the system.

The National Weather Service has this storm summary for the nation:
http://www.hpc.ncep.noaa.gov/discussions/nfdscc3.html

…WIDESPREAD HEAVY SNOWFALL FROM THE CENTRAL PLAINS TO THE UPPERGREAT LAKES…
BLIZZARD WARNINGS ARE IN EFFECT FOR PORTIONS OF THE CENTRAL ROCKIES…EASTERN NEBRASKA…AND ACROSS IOWA AND SOUTHERN MINNESOTA.
WINTER STORM WARNINGS AND WINTER WEATHER ADVISORIES ARE CURRENTLY IN EFFECT FROM THE CENTRAL ROCKIES…EASTWARD ACROSS THE CENTRALPLAINS…AND NORTHEASTWARD INTO THE MIDDLE MISSISSIPPI VALLEY AND UPPER GREAT LAKES REGIONS. WINTER STORM WATCHES…WARNINGS…AND WINTER WEATHER ADVISORIES ARE ALSO IN EFFECT ALONG THE CENTRAL APPALACHIANS AND INTO NEW ENGLAND.
HIGH WIND WATCHES…WARNINGS…AND WIND ADVISORIES ARE IN EFFECTFOR PORTIONS THE SOUTHERN HIGH PLAINS…OHIO VALLEY…AND LOWER GREAT LAKES REGIONS.
FOR A DETAILED GRAPHICAL DEPICTION OF THE LATEST WATCHES…WARNINGS AND ADVISORIES…PLEASE SEE WWW.WEATHER.GOV
AT 200 PM CST…A 989 MB LOW PRESSURE CENTER WAS LOCATED OVER THE OKLAHOMA PANHANDLE. NATIONAL WEATHER SERVICE DOPPLER RADARS AND SURFACE OBSERVATIONS INDICATED WIDESPREAD PRECIPITATION ACROSS THE CENTRAL AND EASTERN U.S.. MODERATE TO HEAVY SNOW WAS FALLING FROM CENTRAL COLORADO TO THE UPPER GREAT LAKES. A NARROW BAND OF MIXED PRECIPITATION WAS OBSERVED ALONG A STATIONARY BOUNDARY DRAPED ACROSS THE CENTRAL PLAINS AND MIDDLE MISSISSIPPI VALLEY. SCATTERED SHOWERS WITH EMBEDDED THUNDERSTORMS WERE MOVING ACROSS THE LOWER MISSISSIPPI VALLEY…TENNESSEE VALLEY…AND SOUTHEAST.
http://www.npr.org/blogs/thetwo-way/2009/12/major_winter_storm_hits_huge_s.html

Jim Lee, a meteorologist with the National Weather Service in Des Moines:

Here in my neck of the woods: (Northeast Ohio)

Meteorologist Scott Sabol says that temperatures have dipped significantly across northeast Ohio, so much so that wind chills are expected to register below zero Thursday evening during the Browns game. Also, the National Weather Service is keeping active a lake effect snow warning for the easternmost counties in the Fox 8 News viewing area.

In addition, thousands are without power in central and eastern Ohio on a chilly morning following a major wind storm.

American Electric Power reported that about 9,000 of its Ohio customers were without service early Thursday, with nearly half of those outages in eastern Ohio’s Jefferson County. The county’s emergency management agency has opened four emergency shelters for people without power or heat at home.

AEP says at the height of Wednesday’s storm, it had nearly 35,000 customers out because of damage to its lines and power poles from wind gusts of up to 61 mph.

A cold front that whipped up winds across Ohio left behind below-freezing temperatures and single-digit or negative wind chills.

The winds made driving hazardous, brought down trees and caused some damage in the Buckeye State. Many residents with outdoor holiday displays were forced to bring those items inside so they didn’t go flying.

Meanwhile, road crews with the Ohio Department of Transportation say that when snowflakes begin to fly, they will be prepared.

“We’re checking the equipment again after we’ve done it several times, making sure that the drivers and the equipment are up and ready to go and they are,” said ODOT spokesman Mark Ziaja.

Tuesday, workers spent the day loading up salt trucks, preparing for the first major snowstorm of the season.
http://www.fox8.com/news/wjw-wickedweather,0,6148673.story

John Hawkins at TownHall has a take on this as well:
http://townhall.com/columnists/JohnHawkins/2009/12/08/four_colossal_holes_in_the_theory_of_man-made_global_warming
Mother Nature always has a way of saying “fuck you” to the “climate change” geniuses.
The trouble is, climate change has been around as long as the earth has existed. It’s a natural cycle that fluctuates regardless of the population.
It doesn’t take a “scientist” at the Climate Research Unit to figure that out.

1 thought on “While the Effetes Bitch About “Global Warming” in Copenhagen, Winter Has Arrived”