Joe Biden wants you to know that he’s suddenly, a year and a half in, developed a mild curiosity about where this pandemic came from. Turns out the virus probably didn’t originate in Omaha. More than that, Joe Biden can’t say. But he’s put some of his top sleuths on it — the super spies in the so-called “intelligence community” — and they’ve promised to report back at some point.
As of today, two-thirds of Joe Biden’s spies believe the virus jumped naturally to humans from an infected animal, as viruses often do as you peruse the pangolin aisle in your local wet market. The spies who believe that are the ones who’ve never spoken to a working virologist and don’t have internet access. But, the other third, Biden told us, “leans more towards” the theory that COVID escaped from the nearby government lab in Wuhan was conducting dangerous experiments on nearly-identical bat coronaviruses at the same time…..
…… Just hours before Biden’s announcement, we learned that the White House had shut down a large, ongoing and legitimate federal investigation into the origins of the pandemic, an investigation that had been going on for months. It was being conducted by the State Department’s Bureau of Arms Control, Verification and Compliance. That’s the bureau responsible for ensuring that countries like China aren’t stockpiling deadly illegal bioweapons, such as, for example, obscure bat coronaviruses that have been manipulated in labs by military scientists to make them more transmissible in, say, New York City.
So, why did the White House shut down that investigation? At a hearing today, senior officials at the National Institutes of Health — including Tony Fauci — said they had no idea why the White House shut it down. They said they first heard about it on the news. That seemed odd, given that the NIH employs the nation’s foremost experts on infectious diseases. And, of course, they’re closely linked to the story. In fact, it was NIH — your tax dollars actually, but funneled through NIH — that funded some of the grotesque and dangerous research at the now-infamous Wuhan Institute of Virology that may have caused the destruction of the west. Today, Senator John Kennedy of Louisiana asked all these questions.

SEN KENNEDY: Why did you guys and ladies spike the priors administration’s investigation into the origins of the coronavirus and whether it could have come out of the Wuhan lab?

FAUCI: Sir we did not spike anything in the prior administration. I’m not sure what you mean by spike but we have no influence.

SEN KENNEDY: The State Department spiked the prior administration’s study.

FAUCI: But that has nothing to do with the National Institutes of Health

SEN KENNEDY: So they didn’t consult with yall?

FAUCI: They did not.

SEN KENNEDY: Did they consult with you Dr. Collins?

DR COLLINS: I read about it in the press this morning.

SEN KENNEDY: They just spiked it without talking to their experts? (silence) You don’t want to answer that one do you?

But we do have some ideas about that. A fact sheet released by the State Department in the closing days of the last administration, written by some of the same people who are doing the investigation the Biden administration shut down, told us that several researchers at the Wuhan Institute of Virology became seriously ill in the fall of 2019, “with symptoms consistent with both COVID-19 and common seasonal illness.” Three of them went to the hospital.

That came out in January, the American media caught up this week, the Intel community confirmed it. In a statement to Fox News today, the State Department contractor that led the State Department’s now-defunct probe, David Asher, reiterated that based on the probe’s findings, “there is probable cause for deep suspicion” that the virus escaped from a lab in Wuhan and the Chinese government lied about it. 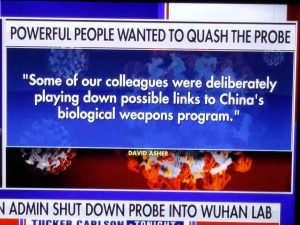 This was all very troubling to David Asher, who’s spent a lot of time looking into this, given that countries like China: 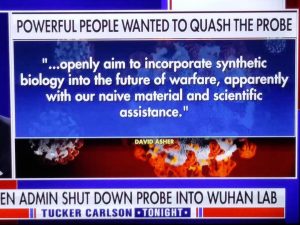 David Asher named Chris Ford, the former acting Under Secretary for Arms Control at the State Department, as someone who: 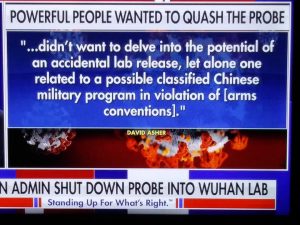 Now, why would an official in the U.S. government not want to know more about a foreign adversary violating international law and imperiling the lives of millions? That’s a great question.

Ford himself responded to Fox News, and he said he had “procedural and structural concerns” about the probe, including that he was kept out of the loop until December. But he emphasized,: 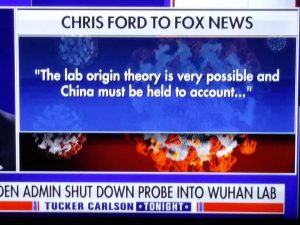 That’s Chris Ford’s position now. We hope it always has been. It should be the position of everyone in the U.S. government. Suddenly, it’s the position of the U.S. media. Virtually every news organization in the country has spent the past week frantically updating their lies about this story. They told you for more than a year it was a conspiracy theory, now they’re pretending they never said that.

The Biden regime did not want to admit the virus was a ChiCom lab concoction because it would have ruined the ‘blame Trump’ narrative, the Biden Crime family has a lot invested into their ChiCom business deals, and Fauci, the unethical incompetent liar, funneled American tax dollars into the Wuhan lab himself. He insisted that the risk of a pathogen escaping the lab “was worth it”.

And of course, the ‘woke’ libs at the New York Times wanted to make sure everyone knew that calling it after the place of origin is “racist”.