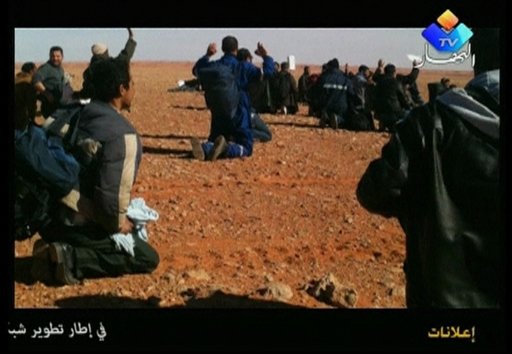 Algerian special forces stormed a natural gas complex in the Sahara desert on Saturday to end a standoff with an Al Qaeda-linked terror group that left at least 23 hostages dead and killed all 32 militants involved, the Algerian government said.

A senior U.S. official tells Fox News that details of the siege remain unclear. It is not known whether anyone was rescued in the final operation, but the number of hostages killed on Saturday — seven — was how many the militants had said that morning they still had. The government described the toll as provisional and some foreigners remain unaccounted for.

Westerners who go anywhere in the Middle East/Africa to do business or to work, are making themselves convenient targets. They only ones who should be in that region are armed military personnel sending muzzies to ‘allah’.  But as I always say, making every Islamofascist nation-state in the Middle East into ashes on 12 September 2001 instead of fighting piecemeal battles, would have been so much  better.