Personal injury lawyers Mark McCloskey, 63, and his wife Patricia, 61, told KMOV4 that they were having dinner with family outside their home when the BLM protesters broke through iron gates marked with “No Trespassing” and “Private Street” and rushed towards their home. 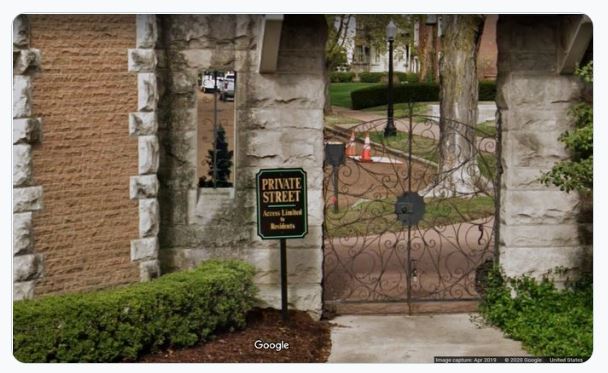 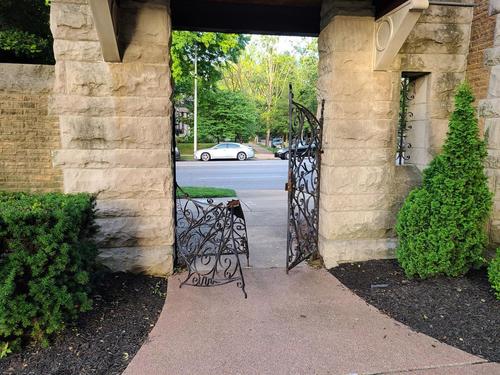 “A mob of at least 100 smashed through the historic wrought iron gates of Portland Place, destroying them, rushed towards my home where my family was having dinner outside and put us in fear of our lives,” said Mark McCloskey.

According to police, the couple told protesters that they were on trespassing on a private street and needed to leave. Shortly after, the couple grabbed their guns after noticing several armed protesters in the crowd, shouting threats.

“This is all private property. There are no public sidewalks or public streets. We were told that we would be killed, our home burned and our dog killed. We were all alone facing an angry mob,” McCloskey told News 4. –KMOV4

The couple, identified as attorneys Mark and Patricia McCloskey, engaged in a shouting match with the protesters, waving what appeared to be an AR-15 rifle and a pistol….

As the Gateway Pundit‘s Cassandra Fairbanks notes, the BLM protesters can be clearly be seen entering a gate into the McCloskey’s private community.

……St. Louis police said the couple had called police for help once they saw the large crowd enter Portland Place. The McCloskeys had been at home and heard a loud commotion coming from the street; they went to investigate and saw “a large group of subjects forcefully break an iron gate marked with ‘No Trespassing’ and ‘Private Street’ signs,” police said.

“The group began yelling obscenities and threats of harm to both victims,” police said. “When the victims observed multiple subjects who were armed, they then armed themselves and contacted police.”

……Anders Walker, a constitutional law professor at St. Louis University, said that although it’s “very dangerous” to engage protesters with guns, the homeowners broke no laws by brandishing or pointing weapons at them because Portland Place is a private street. He said the McCloskeys are protected by Missouri’s Castle Doctrine, which allows people to use deadly force to defend private property.

“At any point that you enter the property, they can then, in Missouri, use deadly force to get you off the lawn,” Walker said, calling the state’s Castle Doctrine a “force field” that “indemnifies you, and you can even pull the trigger in Missouri.”

Of course, the liberal media and leftwing mob are frothing over this.

Lefty think tank president says he would have “rushed them and beaten their brains in”.  As you can imagine, his rancid stupidity was not well received.

The McCloskeys told the trespassers to get off of their property, the mob then threatened to murder him and his wife. They called the police & security. No one came so they got their legally purchased firearms.

Shame on the media for demonizing this couple. pic.twitter.com/MvpBz5BbtG

More citizens are taking a stand against these violent punks. The increase in the arson, assaults, and vandalism by the rampaging mob has resulted in a spike in gun ownership.

Newsflash for the antifa/BLM shitstains: Your rights end where mine begin. You can march down the street with your signs and scream your racist anti-white, anti-cop bullshit to your little heart’s content, but trespass on my property and threaten my life and my family, and I will drop your putrid ass where you stand.