The Proglodytes can’t help themselves.

The California Democrat was buffeted on social media with reminders about his past connection to an alleged Chinese Communist Party spy after he linked the Orange County gunman to Republicans in a late Sunday tweet, before the suspect’s name had been released. 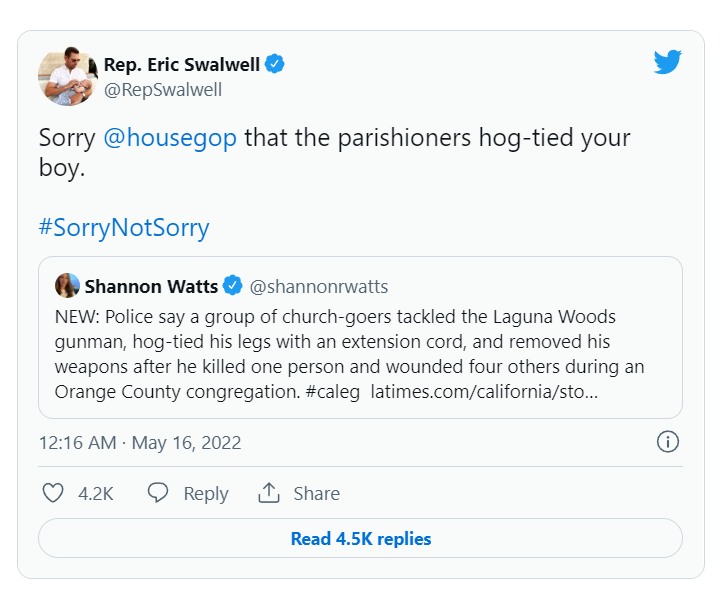 The next day, the Orange County Sheriff’s Department said that the suspect was 68-year-old David Wenwei Chou, a U.S. citizen who immigrated from China and allegedly targeted the Irvine Taiwanese Presbyterian Church out of antipathy toward Taiwan.

One parishioner was killed and five were wounded in the Sunday attack at the Laguna Woods church before congregants managed to subdue and hog-tie the suspect with an extension cord.

As commentators were quick to point out,  Swalwell was aided in his political rise by Fang Fang, or Christine Fang, a suspected Chinese operative who did fundraising for his congressional campaign.

Other comments included, “You might want to ask Fang Fang about this,” “Sounds like he was your boy, champ,” “You let a Chinese spy hogtie you,” and “Well that tweet didn’t age well.”

“WTF is wrong with you, Eric? Does that Chinese spy still have some leverage on you?” tweeted Denver KOA AM/FM radio host Ross Kaminsky.

Swalwell has left up the tweet. The Washington Times has reached out to his office for comment.

Swalwell is the same shitbag who claimed the government could ‘nuke’ gun owners if they didn’t kowtow to confiscation.

While a motive for the shooting was not immediately disclosed, investigators said they don’t believe the gunman — identified on Monday as 68-year-old David Chou of Las Vegas — lives in the community.

One person is dead and five people are wounded after a shooting on Sunday at a church in Orange County, Calif., but the churchgoers intervened to prevent the situation from being “much worse,” the sheriff’s department stated.

“We have detained one person and have recovered a weapon that may be involved,” the Orange County Sheriff’s Department tweeted.

Authorities described the suspect as an Asian male in his 60s. His motive is still unclear. The shooting occurred at a luncheon for Taiwanese church attendees, The Los Angeles Times reported.

“We believe a group of churchgoers detained him and hog-tied his legs with an extension cord and confiscated at least two weapons from him. He was detained when the deputies arrived,” the officer said.

“It’s safe to say that had they not intervened this situation could have been much worse,” Hallock noted.

One person died at the scene, while four victims are “critically wounded” and one has minor injuries, police said. The victims, all adults, are being transported to the hospital.

Deputies responded to the shooting at Geneva Presbyterian Church, on the 24000 block of El Toro Road in Laguna Woods, after receiving a call shortly before 1:30 p.m. local time.

The Orange County Fire Authority said it is also on the scene and is “treating and transporting multiple patients.”

The sheriff’s department is planning a press conference at 5 p.m. local time to give more details on the incident.

The incident comes the day after another mass shooting in Buffalo, N.Y., resulted in 10 deaths. A separate shooting in Milwaukee Friday night left 20 people wounded outside of a Bucks-Celtics NBA game.

The Left has a habit of deflecting blame based on how a perp matches up with their ideology.