Must be a “reparations” thing.

Justin Tyran Roberts, 39, was arrested on Saturday on suspicion of wounding five people across Alabama and Georgia during a shooting spree that lasted 20 hours. Two of the shootings took place in Uptown Columbus while the other occurred in the parking lot of a hotel in Phenix City. 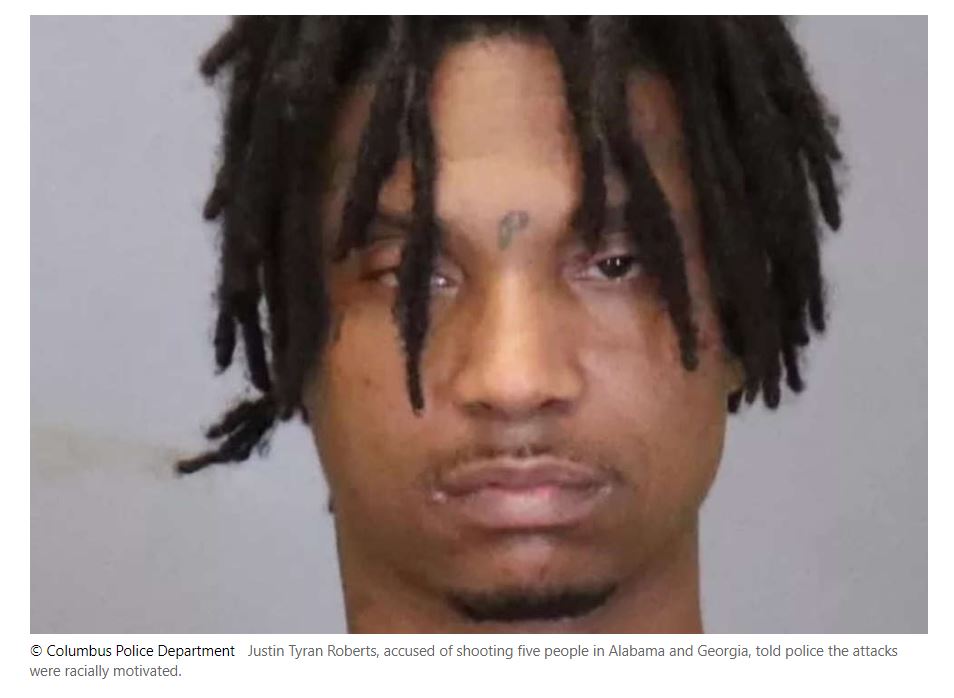 During a preliminary hearing at Columbus Recorder’s Court on Monday, Columbus Police Detective Brandon Lockhart said that the suspect sought out to harm white men as he said he had been targeted himself.

Roberts also said that white men were “shooting at him in a wooded area with a slingshot,” which broke his skin, although police reported the suspect had no injuries to back up these claims.

Roberts was not in court for a hearing concerning one of the shootings which took place near the Oglethorpe Bridge in Columbus at around 2 p.m. on Saturday.

Roberts is accused of shooting a man as he was getting into his vehicle.

Lockhart testified to the court that Roberts said, “I had to have him” with regards to the man he is accused of firing at several times, hitting him once in the back.

However, Roberts is also said to have admitted shooting a Black woman and an Asian male during the assaults.

Assistant Public Defender Robin King requested that Judge Julius Hunter order a mental health evaluation on Roberts’ behalf, arguing that Lockhart’s testimony shows the suspect is having “delusions and a disconnect from reality.”

He faces further charges for the shooting which took place in Phenix City, Alabama, at around 8:15 p.m. on Friday, June 11. Roberts could also be hit with an additional hate crime charge.

The 39-year-old is currently being held without bond.