Powell’s reasoning is as vapid as the endorsement itself:

……he concluded that Obama is better suited than McCain, the standard-bearer of Powell’s own party, to handle the nation’s economic problems and help improve its world standing.

……Powell added: “I think we need a transformational figure. I think we need a president who is a generational change and that’s why I’m supporting Barack Obama, not out of any lack of respect or admiration for Sen. John McCain.”

A generational change?  Sheesh.  The Socialists, Communists, and radical muslims are the ones salivating for a ‘change they can believe in’.

……Powell expressed disappointment in the negative tone of McCain’s campaign, his choice of Alaska Gov. Sarah Palin as a running mate and their decision to focus in the closing weeks of the contest on Obama’s ties to 1960s-era radical William Ayers, saying “it goes too far.”

It didn’t go far enough, soon enough.  Obama’s past and current affiliations, along with his radical economic and foreign policy ideology, are indicative of someone who will do serious damage to national security and give a green light for more attacks against this country.

Governor Palin has vastly more experience with overseeing a budget, military personnel, and legislating during her tenure, than Obama has during his run as Senator.

Powell has been leaning leftward for a while. He flip-flopped ala Kerry, when it came to Iraq. He argued against going all the way to Baghdad in 1991,–which would have saved us a second trip–did a u-turn supporting the belated invasion in 2002, and then started ascribing to the democrats’ cut-and-run idea. He promoted Arafat, advocates shutting down GITMO, and giving the terrorist thugs easy access to ACLU hacks and the same rights afforded American citizens. He’s played the race card, too. During an MTV interview, he said the only reason he was picked for Secretary of State was because he ‘looked white’.

His endorsement of Obama doesn’t surprise me, nor will it make an iota of difference in the fact that 98% of the military–across the board– (officers, NCOs, enlisted) prefer Republicans over Democrats for one simple reason: We know damned well which party appreciates us.

Carter, Clinton, Murtha, Durbin, and the rest of the Dem assclowns, have proven beyond all doubt, that they have absolutely no respect for the military.

Except when they wag-the-dog.

He was a uniformed career E-Ring politician, and he benefited from the Republican-dominated Reagan-Bush era.

Whatever his position, he’s always been on Colin Powell’s side.

While Colin Powell flirts with the left, he’d better know what they’ve thought of him in the past.
“Warmonger” was one of their favorite terms, and they were not averse to depicting him and Condi Rice in racist terms, especially in cartoon form.

And this one from a sign hoisted by an anti-war ‘protester’: 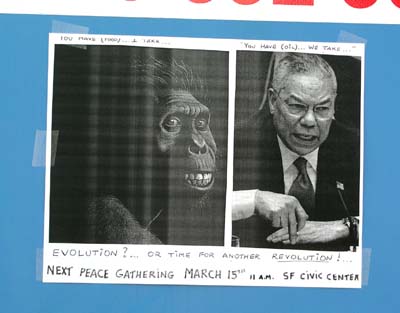