Never mind a roadblock, just coral as many people within eyesight and arrest everybody to get the ‘right one’. Constitution? What Constitution? 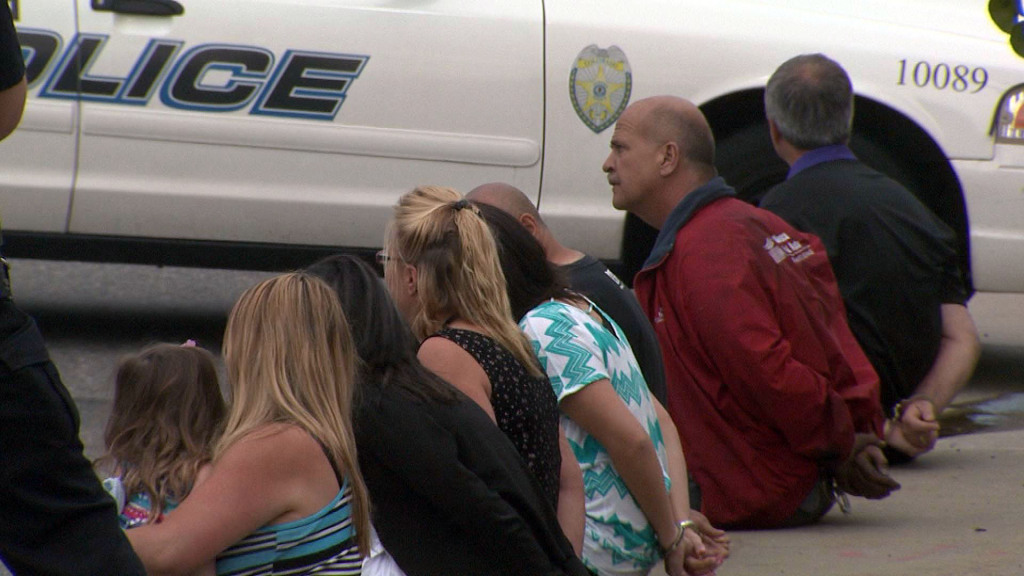 Never give a badge and weapon to an idiot on steroids. If that shotgun had gone off, the kid would have been killed. 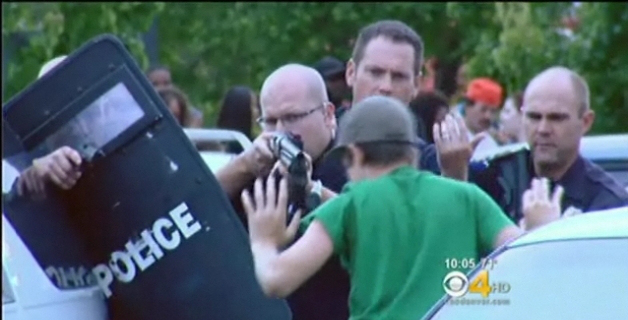 The big picture here is that the police in this small Colorado town applied tactics that are forbidden by the U.S. Constitution, and which were perfected by the SS in Nazi Germany, in order to make their job easier. Nazi Germany had the lowest crime rate of any modern society; but it had no freedom. The cops and the SS regularly arrested groups until they found the person they wanted. We fought World War II in large measure to prevent such behavior by the government.

Here is the law. The government may stop a person temporarily–for a few minutes and in public–and ask questions of the person only when it has “articulable suspicion” about that person. The suspicion must be based on objective observations, not immutable characteristics (such as race or gender) or group characteristics (such as location or beliefs). The government may only arrest a person–prevent movement using restraints or force for more than a few moments–when it has probable cause to believe that the arrested person has committed a crime. The standard for arrest requires a “more likely than not” objective conclusion of criminal behavior on the part of the arrested person.

The behavior of the cops on Aurora, CO will cost the town a great deal of money; and it should provoke a federal criminal investigation of the police behavior. The Aurora police violated basic constitutionally-guaranteed rights, federal law, rights guaranteed by the Colorado Constitution, and state law.
—Judge Andrew Napolitano

Police in Aurora, Colo., searching for suspected bank robbers stopped every car at an intersection, handcuffed all the adults and searched the cars, one of which they believed was carrying the suspect.

Police said they had received what they called a “reliable” tip that the culprit in an armed robbery at a Wells Fargo bank committed earlier was stopped at the red light.

“We didn’t have a description, didn’t know race or gender or anything, so a split-second decision was made to stop all the cars at that intersection, and search for the armed robber,” Aurora police Officer Frank Fania told ABC News.

“Cops came in from every direction and just threw their car in front of my car,” Sonya Romero, one of the drivers who was handcuffed, told ABC News affiliate KMGH-TV in Denver.

From there, the police went from car to car, removing the passengers and handcuffing the adults.

“Most of the adults were handcuffed, then were told what was going on and were asked for permission to search the car,” Fania said. “They all granted permission, and once nothing was found in their cars, they were un-handcuffed.”

They “all granted permission”? They were probably all scared shitless. I would have out and out refused a search unless they had genuine probable cause.  They didn’t have a gender, race, or a description, so where’s the fucking probable cause?

Police Chief Daniel Oates on Monday apologized to the innocent bystanders that got caught up in the search for the suspect. Oates also said the ends justify the means since the suspect was caught.

……Oates would not discuss the tracking technology used, but called it a “virtual certainty” that the suspect was among the 40 people stopped and handcuffed.

……The suspect was captured on surveillance cameras wearing a beekeeper mask and gloves.

This trashes the 4th Amendment on so many levels.  They should get the crap sued out of them. Start with the statutes under 42 USC Section 1983.  Kick the incompetent slugs off the police force and train the rest to know the difference between wholesale stupidity and what constitutes reasonable suspicion. I guarantee if Oates got dragged out of a car and handcuffed in the same manner for the same lame excuse I have a virtual certainty he would scream bloody murder.

By the way, the SCOTUS effectively scuttled the 4th Amendment in Indiana before the Governor retaliated with a law that allows Hoosiers to defend themselves against illegal entry by cops.

I don’t know what the hell is going on in Aurora, but by all indications, the law enforcement is out of control.