A math teacher at Steinert High School was caught on video this week shouting at a group of teenagers playing football in the park that they should “die a long, painful death” from the coronavirus.

The teacher was identified by multiple sources as Nicole Griggs, who has been a township teacher for the last 15 years and also taught middle school, according to the district website.

One of the teenagers, a freshman at Steinert, told The Trentonian that he and a group of school friends were playing football Thursday at the former Homedell School, on the 500 block of East Franklin Street, when Griggs stopped to admonish them from behind a chain-link fence.

One of the township students captured the encounter on Snapchat and sent it to friends.

Then another Steinert student posted the clip on TikTok, a social media platform that often features viral videos, with the caption, “Y’all Mrs Griggs is losing her damn mind how tf is she a teacher #coronavirus.”

At first, Griggs, who appears to be wearing a gray sweatshirt and walking her dog, seems to be looking out for the teens by telling them the parks are closed because of the virus outbreak.

She asks them if they need her to scream the warning “loud enough so you can hear me over your music. Parks closed. You will get arrested if the cops come.”

She soon melts down when one of the teens asks, “Wait, can we go over there?”

The teacher goes so far as to tell the teens she doesn’t care if they put her on blast online.

“Parks closed. The whole area,” Griggs says. “Get it through your thick head. You are the reason we are in this situation. You are the problem, not the solution. Go ahead keep recording. Who are you going to show it to? Post me on social media. You’re the idiot doing the wrong thing. I’m just trying to save your ass and save your life. But die, OK. I hope both of you get the coronavirus. I hope you both die a long, painful death.”

……Griggs lives on the 500 block of Redfern Street, a tenth of a mile away from the park and well within walking distance, according to property records.

In an April 6 post on the Facebook page of Nikki Leigh, which Griggs appears to operate under an alias, she says: 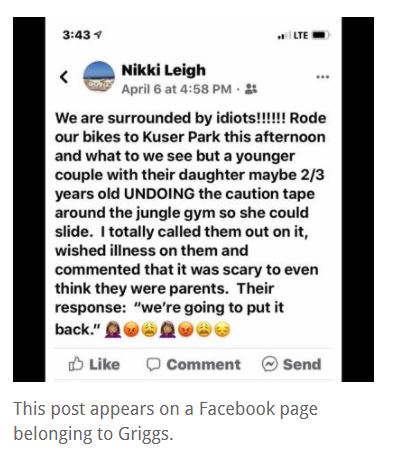 This is the nutbag in action:

The Trentonian confirmed the Facebook page belongs to Griggs.

The Whitepages lists Griggs’ middle initial as L and has Deborah Griggs as one of her relatives.

Deborah Griggs, who indicates she used to work for the Hamilton Township Board of Education, lists Nikki Leigh as her daughter in the family section of Facebook.

The Steinert freshman said that Griggs threatened to call the cops on them and that a cop actually showed up at the park but didn’t cite them and told them to go somewhere.

……Schools superintendent Scott Rocco said in a statement late Saturday the district was made aware of the video and will investigate.

“We will address the issue immediately,” he said.

The president of the Hamilton teachers union, Frank Gatto, had no comment for this story.

That’s a prime example of how the triggered moonbats go off the crazy cliff when they see, hear, or know of someone who refuses to submit to the tyrannical lockdown while the country’s economy disintegrates and civil liberties are trampled.

Even after the lockdown ends (whether the government likes it or not) there will still be remnants of Griggs and Dan Pastor; tools who will always be ready to belch the party line.