“A lot of police officers don’t wear a mask … well, how are you then supposed to enforce other people wearing a mask when they see you not wearing a mask?” Cuomo asked, the New York Post reported.

The governors criticism is mostly in response to a handful of county sheriffs in the western part of New York who have responded by stating they won’t be enforcing the governors indoor cap of 10 people for the Thanksgiving holiday.

……Police Commissioner Dermot Shea explained on Tuesday that the NYPD would not be enforcing the 10 person cap for the Thanksgiving holiday, the New York Post reported.

One sheriff, Michael Zurlo from Saratoga County stated that he will not be complying and enforcing the mandate from the governor.

“I can’t see how devoting our resources to counting cars in citizens’ driveways or investigating how much turkey and dressing they’ve purchased if for the public good,” WRGB Albany reported.

This is the same Dem shitbag who allows mass riots by Antifa and BLM thugs.

Fulton County Sheriff Richard Giardino on Monday accused Governor Cuomo of ‘scaring the hell out of people’ and announced his office had no plans to enforce the new rule.

‘People have enough anxiety in their life without thinking that the police are going to come to their door and check on how many people are there,’ the Republican sheriff told the Times Union.

‘But they hear it on TV and think if they add in grandma, they are going to be arrested.’

Giardino had also publicly criticized the move on Friday, when the order went into effect, in a Facebook post slamming the ‘constant barrage of government regulations and control’ over people’s daily lives.

He said the government-imposed restrictions were only adding to the ‘mass depression’ and disruption brought by the pandemic.

‘Who and how many people you invite in to your home is your business, unlike outdoor gatherings which may receive a police response if disorderly or other violations of public nuisance laws occur,’ Giardino wrote. 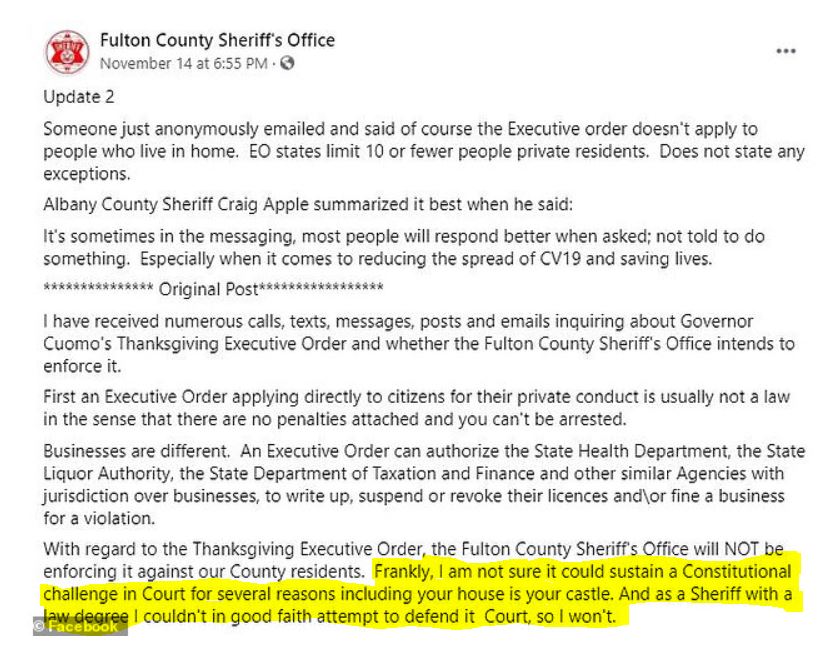 Good for them. More cops need to tell overzealous governors and mayors where to stick their authoritarian edicts,