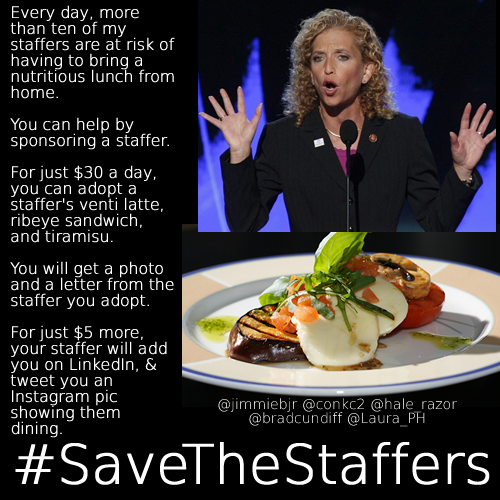 Americans have been tightening their own budgets and cutting back for years, and now it’s their elected members of Congress who are feeling the strain. That’s according to Rep. Debbie Wasserman Schultz (D-FL), who suggested that staffers are starving thanks to sequester cuts.

Wasserman Schultz said, “We have to come together and promote initiatives that improve the quality of life in the House of Representatives.”

She went on to say, “We already have employees who are making a sacrifice to engage in public service as a career choice. Being priced out of being able to actually eat a high quality meal should not be one of the challenges that they face.”

O’Reilly Factor producer, Jesse Watters reacted on Fox and Friends. “We’re cutting the military, we’re cutting the White House tours, people returning from Iraq and Afghanistan […] they can’t get the subsidies they need to get educated. And she’s trying to gain sympathy here for these rich, preppy White House staffers.”

Clayton Morris pointed out, “By the way, if you look at the quality of the food, even lowering it, it’s still better than the school lunches most of our kids get to eat across this country.”

An 8-ounce bowl of Ham and Bean soup at the Cannon Office Building’s carry-out café costs $2. A gourmet wrap or sliced bread sandwich sells for about $5. And in the Longworth Building’s sit-down cafeteria, a serving of stuffed chicken, asparagus and mashed potatoes sells for about $7.

And oh by the way, Dem strategist Hillary Rosen says how dare us little people question the way Biden wasted over half a million dollars on himself.

If this were 1790’s France, they’d all be guillotined.

2 thoughts on “Debbie Wasserman Schultz: ‘The Sequester Will Starve My Staffers’”