Now we know why the J6 political prisoners have been treated like they’re in Shawshank.

Kathleen Landerkin, the current Correctional Training Facility (CTF) Deputy Warden at the Department of Corrections in the District of Columbia, assists in overseeing day to day operations, inmate transportation, and case management.
Though she holds a position of power of January 6 inmates, Landerkin continued to spout anti-Trump and anti-Republican rhetoric on her Twitter until she deleted her account earlier today. 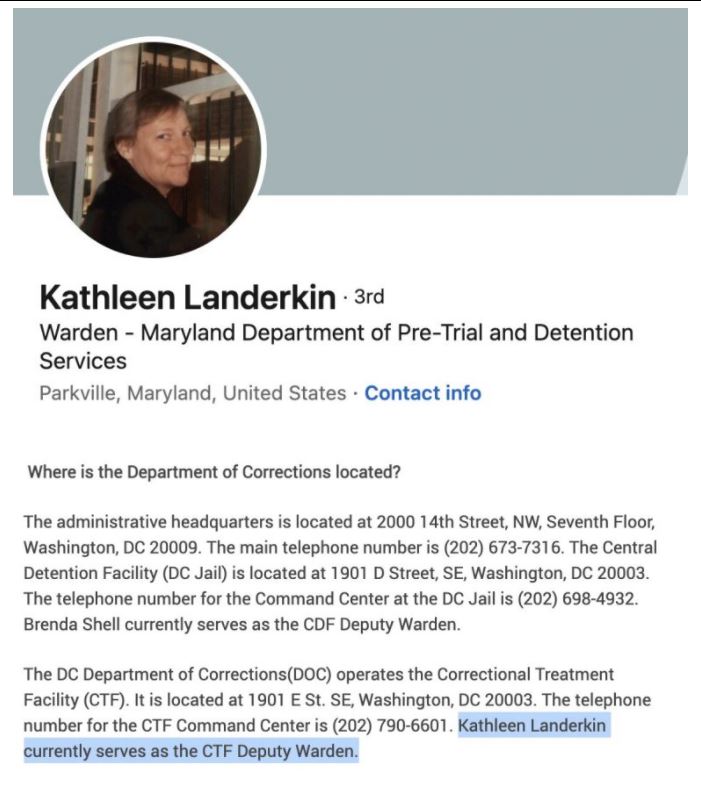 Congresswoman Marjorie Taylor Greene tweeted at Landerkin, “You are responsible for human rights violations in the DC Jail and torture and abuse of pre-trial defendants.” 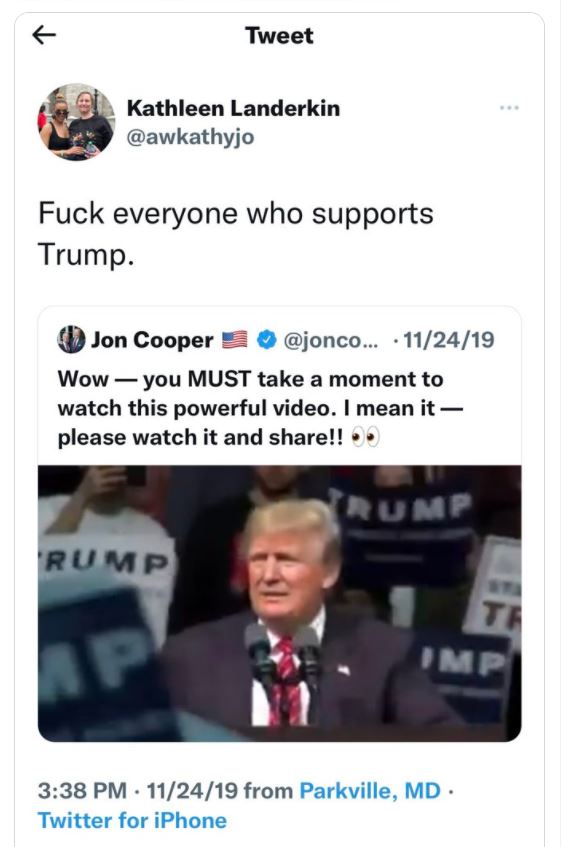 Alex Brusewitz, the CEO of XStrategies, conducted an advanced search of her twitter by typing “Trump” and dozens of anti-Trump tweets came up such as “The Trump family is a crime family and the GOP in [sic] complicit,” and “Trump is doing more damage to this country then [sic] foreign terrorists ever have.”

……In September of 2018, Landerkin revealed that she had a “Resist” bumper sticker on her vehicle.

……Landerkin also appears to be a partisan Democrat and a supporter of President Barack Obama. She also claimed that, because President Trump did not win the popular vote in 2016, the electoral college should be abolished.

Since 2018, Landerkin has lectured white people and made her disdain for white men known. 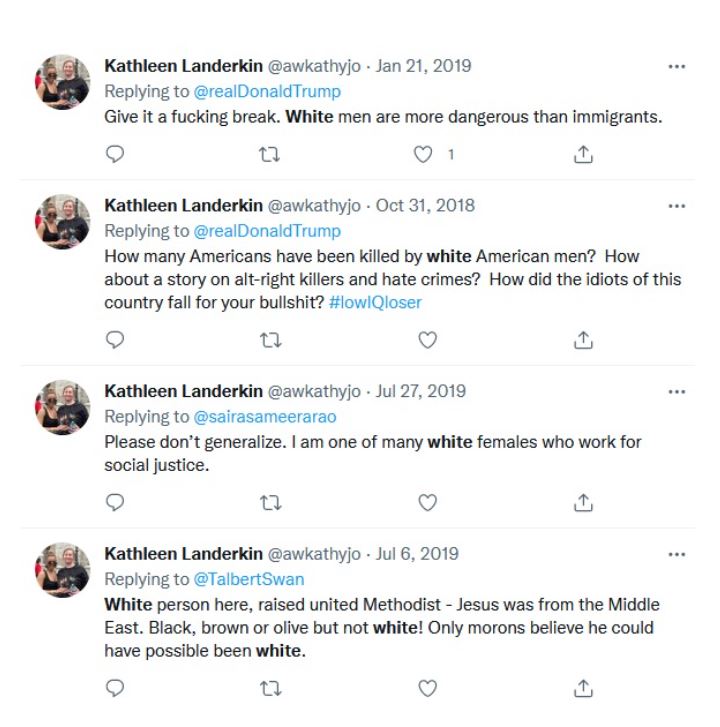 ……Inmates in the D.C. prison are being transferred to other prisons after the U.S. Marshals Service found “evidence of systemic failures” and unacceptable living conditions. The USMS found human rights being violated by the prison, such as guards that punitively withheld food and water from inmates, inmates that stood in human sewage because the toilets were clogged, and guards that have assaulted inmates.

In addition, Greene has described the conditions of the prison as ““unusually cruel,” saying that inmates have been denied access to their attorneys, have been denied haircuts or razors to shave for months, and have not been given proper medical treatment when they needed it. When Greene tried to access the prison post-1/6, Deputy Warden Kathleen Landerkin denied Greene and fellow congressional staff access. Before 1/6, there was never an issue with congressional staff accessing the facility.

That bitch should be thrown into one of her own cells.

American political prisoners have been held for more than 9 months in solitary confinement in 7X10 cells for 23 hours a day. These people have not been convicted of any crimes, they are being held in “pretrial detention” for trespassing the capitol halls of corruption on 6 January 2021. Their trials have not been set. They have been denied bail. They are not allowed to meet with lawyers in private. They have one hour a day for “exercise”, showers, and phone calls. They have been denied due process.

The 6 January protesters have been beaten and isolated by the guards.  Lawyers for one, a man called Ryan Samsel, say he was beaten so badly he has a skull fracture and is now blind in one eye.

One of them died awaiting trial.

Yet, the Antifa/BLM goons responsible for the destruction of neighborhoods, businesses, police stations, and courthouses, have skated out of any legal consequences for their crimes.  The Feds refuse to prosecute.

Enough of this shit. The entire Biden regime, including his goons in the DOJ and FBI need to get another revolution that makes 1776 look like a minor scuffle. They all belong under the fucking prison.

1 thought on “Deputy Warden of the D.C. Jail Where Biden’s Political Prisoners Are Kept, is a Flaming Leftie With TDS”