Homeland Security Secretary Alejandro Mayorkas ominously warned Cubans on Tuesday that they would not be permitted to enter the United States if they flee from their homeland amid rising tensions between the Cuban communist government and Cubans demanding freedom.

Mayorkas, whose own family escaped Cuba, claimed the Biden administration stands in “solidarity with the Cuban people and their call for freedom.”

But in the very same breath, Mayorkas rebuked Cubans — and Haitians — from seeking refuge in America via sea travel.

“The Coast Guard, along with our state, local, and federal partners are monitoring any activity that may indicate increases in unsafe and irregular maritime migration in the Florida straits, including unpermitted vessel departures from Florida to Cuba,” the secretary said. “The time is never right to attempt migration by sea. To those who risk their lives doing so, this risk is not worth taking.”

“Allow me to be clear: If you take to the sea, you will not come to the United States,” he added.

Despite the overwhelming proof that the Cuban government is using deadly force to squash the protests, Mayorkas said such refugees will never set foot on U.S. soil.

“If individuals make, establish a well-founded fear of persecution or torture, they are referred to third countries for resettlement,” Mayorkas said. “They will not enter the United States.”

This is what Mayorkas said before: 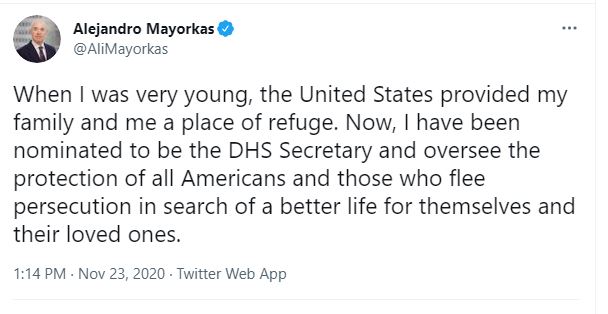 Now that he’s a servant of the Biden regime, he won’t give that same refuge to his own Cuban people.

But he, and the rest of the Dem cabal, welcome illegal aliens from south of the border with open arms.