His hubris has no bounds. 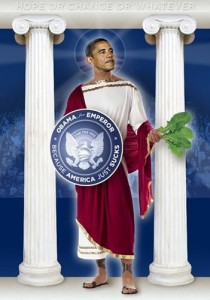 “I’ve got a whole drawer full of royal edicts.”

From the Washington Times:

Obama has taken heat recently for working around Congress whenever he thinks it necessary to, among other things, delay Obamacare mandates and trim immigration enforcement.

But the commander-in-chief on Monday boasted of how, as president, “I can do whatever I want.”

Obama made the tongue-in-cheek remark as he toured Monticello, the Charlottesville, Va., estate of Thomas Jefferson, with French President Francois Hollande. The visit is part of Mr. Hollande’s three-day stay in the U.S. this week.

The president delighted in his ability to “break the protocol” and view the Monticello grounds from a private terrace.

“That’s the good thing as a president. I can do whatever I want,” Mr. Obama said.

Obama’s pronouncement came just an hour after the administration took unilateral action to delay and trim back more of the employer-mandate portions under Obamacare, the latest example of the White House’s willingness to act on its own, even when it comes to changing laws already on the books.

The “tongue-in-cheek” pronouncement is a description of what he’s been doing the past five years of his regime.
Obama figures he can do anything he wants, which runs contrary to the Checks and Balances proscribed in the Constitution; a document he’s shredded ever since he took the oath of office. It’s a trait he shares with his Dem comrades.  They “don’t work for the little people“.   Their priorities are power, control, and suppression of dissent.  He bypasses Congress and the Constitution at will; an act of tyranny he feels is rightfully his.  His tools in the Dem party and the liberal media see no problem with his lawlessness.
Hey GOP: When will you grow a backbone and start impeachment?

2 thoughts on “Emperor Obama: “I can do whatever I want””