Damn. I served in Desert Storm under his command. He was a hell of a guy and a leader. Sadly, commanders of his caliper are no longer welcome in the PC atmosphere of today’s military. I already miss him. 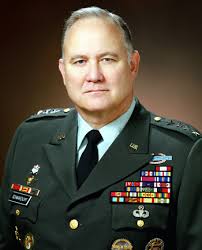 The seemingly no-nonsense Desert Storm commander’s reputed temper with aides and subordinates supposedly earned him that rough-and-ready moniker. But others around the general, who died Thursday in Tampa, Fla., at age 78 from complications from pneumonia, knew him as a friendly, talkative and even jovial figure who preferred the somewhat milder sobriquet given by his troops: “The Bear.”

That one perhaps suited him better later in his life, when he supported various national causes and children’s charities while eschewing the spotlight and resisting efforts to draft him to run for political office.

He lived out a quiet retirement in Tampa, where he’d served his last military assignment and where an elementary school bearing his name is testament to his standing in the community.

Schwarzkopf capped an illustrious military career by commanding the U.S.-led international coalition that drove Saddam Hussein’s forces out of Kuwait in 1991 — but he’d managed to keep a low profile in the public debate over the second Gulf War against Iraq, saying at one point that he doubted victory would be as easy as the White House and the Pentagon predicted.

Schwarzkopf was named commander in chief of U.S. Central Command at Tampa’s MacDill Air Force Base in 1988, overseeing the headquarters for U.S. military and security concerns in nearly two dozen countries stretching across the Middle East to Afghanistan and the rest of central Asia, plus Pakistan.

When Saddam invaded Kuwait two years later to punish it for allegedly stealing Iraqi oil reserves, Schwarzkopf commanded Operation Desert Storm, the coalition of some 30 countries organized by President George H.W. Bush that succeeded in driving the Iraqis out.

At the peak of his postwar national celebrity, Schwarzkopf — a self-proclaimed political independent — rejected suggestions that he run for office, and remained far more private than other generals, although he did serve briefly as a military commentator for NBC.

While focused primarily on charitable enterprises in his later years, he campaigned for President George W. Bush in 2000, but was ambivalent about the 2003 invasion of Iraq. In early 2003 he told The Washington Post that the outcome was an unknown: “What is postwar Iraq going to look like, with the Kurds and the Sunnis and the Shiites? That’s a huge question, to my mind. It really should be part of the overall campaign plan.”

……In 1966 he volunteered for Vietnam and served two tours, first as a U.S. adviser to South Vietnamese paratroops and later as a battalion commander in the U.S. Army’s Americal Division. He earned three Silver Stars for valor — including one for saving troops from a minefield — plus a Bronze Star, a Purple Heart and three Distinguished Service Medals. While many career officers left military service embittered by Vietnam, Schwarzkopf was among those who opted to stay and help rebuild the tattered Army into a potent, modernized all-volunteer force.