Holder went judge shopping until he found one who would sign a secret subpoena against Fox News.

Want a good laugh?  Dear Leader has ordered Holder to investigate himself and his own DOJ.

Surprise: Holder signed off on the warrant for James Rosen’s emails.

Attorney General Eric Holder signed off on a controversial search warrant that identified Fox News reporter James Rosen as a “possible co-conspirator” in violations of the Espionage Act and authorized seizure of his private emails, a law enforcement official told NBC News on Thursday.

And he LIED under oath:

In regard to potential prosecution of the press for the disclosure of material. This is not something I’ve ever been involved in, heard of, or would think would be wise policy.

Said Obama in his major speech on his counterterrorism policy:

“I am troubled by the possibility that leak investigations may chill the investigative journalism that holds government accountable”. “Journalists should not be at legal risk for doing their jobs.”

No one in the entire corrupt Obama regime, including the Corruptocrat-in-Chief is being held accountable by Congress or the bulk of the leftwing MSM. They get suspended with pay, removed from one position and shifted to another (“fired”), and paraded in front of investigative hearings where a lot of hot air passes for real prosecution.

U.S. District Judge Royce C. Lambert: “Ooops, I kept the secret IRS files on James Rosen’s emails hidden for a year and a half in spite of an order from a federal judge to release the documents to the public.”

On Wednesday, the chief judge of the District’s federal court issued an order apologizing to the media and the public for not making court documents widely available online when he was ordered to, last year.

According to those documents, the Justice Department had a dossier of information about Fox News’ James Rosen’s interactions with the State Department, including a search warrant for his personal emails.

The effort follows that by the department to secretly obtain two months of phone records from Associated Press journalists as part of a separate leak probe. The department in this case, though, went a step further — as an FBI agent claimed there’s evidence the Fox News correspondent broke the law, “at the very least, either as an aider, abettor and/or co-conspirator.”

The gesture of transparency by U.S. District Judge Royce C. Lamberth comes at a time when the Obama administration is under scrutiny for an unprecedented number of leak investigations, including one showing that the Justice Department had secretly probed the news-gathering activities of Fox News reporter James Rosen.

The investigation of Rosen was first reported Monday, after The Washington Post obtained court documents containing details of the case.

A federal judge had ordered the documents unsealed in November 2011, but they were kept sealed for 18 months and not posted on the court’s online docket until last week, after The Post inquired about them.

Lamberth blamed a series of administrative errors and said a review of the “performance of the personnel involved is underway.” He also said he was creating a new category on the court’s Web site where all search and arrest warrants will be made public unless they fall under a separate sealing order.

There’s a lot of that CRSS (Can’t Remember Shit Syndrome) going around.  All parties involved are scrambling to cover their asses by spinning, denying, or suddenly discovering long-lost information .

What a coink-i-dink. The very same month the DOJ started its probe and illegal seizure  of James Rosen’s phone records, Obama’s war on Fox News began.

When the Justice Department began investigating possible leaks of classified information about North Korea in 2009, investigators did more than obtain telephone records of a working journalist suspected of receiving the secret material.

……The case of Stephen Jin-Woo Kim, the government adviser, and James Rosen, the chief Washington correspondent for Fox News, bears striking similarities to a sweeping leaks investigation disclosed last week in which federal investigators obtained records over two months of more than 20 telephone lines assigned to the Associated Press.

At a time when Obama’s administration is under renewed scrutiny for an unprecedented number of leak investigations, the Kim case provides a rare glimpse into the inner workings of one such probe.

Court documents in the Kim case reveal how deeply investigators explored the private communications of a working journalist — and raise the question of how often journalists have been investigated as closely as Rosen was in 2010. The case also raises new concerns among critics of government secrecy about the possible stifling effect of these investigations on a critical element of press freedom: the exchange of information between reporters and their sources.

……“The latest events show an expansion of this law enforcement technique,” said attorney Abbe Lowell, who is defending Kim on federal charges filed in 2010 that he disclosed national defense information. A trial is possible as soon as 2014. “Individual reporters or small time periods have turned into 20 [telephone] lines and months of records with no obvious attempt to be targeted or narrow.”

The Kim case began in June 2009, when Rosen reported that U.S. intelligence officials were warning that North Korea was likely to respond to United Nations sanctions with more nuclear tests. The CIA had learned the information, Rosen wrote, from sources inside North Korea.

The story was published online the same day that a top-secret report was made available to a small circle within the intelligence community — including Kim, who at the time was a State Department arms expert with security clearance.

FBI investigators used the security-badge data, phone records and e-mail exchanges to build a case that Kim shared the report with Rosen soon after receiving it, court records show.

……Investigators also scrutinized computer records and found that someone who had logged in with Kim’s user profile viewed the classified report “at or around” the same time two calls were placed from his desk phone to Rosen, according to the documents.

Fox News stands by Rosen and insists it will defend free press.

Citizens rally around the country in support of Rosen.

Dana Milbank, who is certainly no conservative, pointed out:

……the administration’s actions shatter the president’s credibility and discourage allies who would otherwise defend the administration against bogus accusations such as those involving the Benghazi “talking points.” If the administration is spying on reporters and accusing them of criminality just for asking questions — well, who knows what else this crowd is capable of doing?

The main henchman going after Fox News, US Attorney for the District of Columbia, Ronald C. Machen, is a big Obama donor.

The DOJ went so far as to grab the phone records of Rosen’s parents.

Ryan Lizza reports on some of the ominous things in the DOJ affidavit:

This is the most chilling section. Absolutely amazing… pic.twitter.com/cjzoNoFbm8 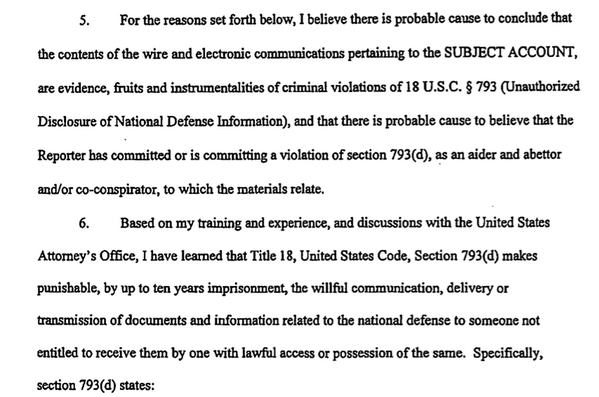 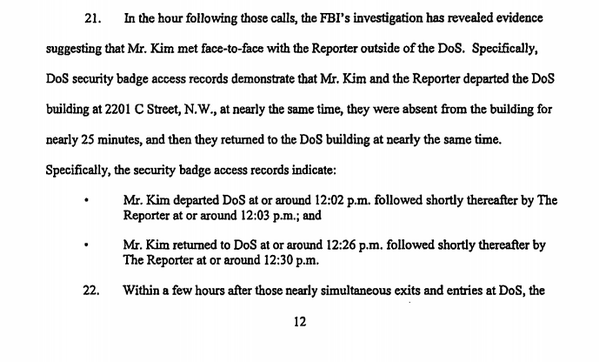 Much more at the LINK.

Kim gave Rosen classified information that was not meant for public view. If the information compromised national security then by all means, prosecute Kim.

I have more respect for whistleblowers and reporters who expose behind-the-scenes operations of an out-of-control, Constitution-shredding federal government.

If the DOJ is so hellbent on going after the leakers as well as the reporters (i.e. the “aiders, abettors, and /or co-conspirators to which the materials relate”), then they have a lot of catching up to do.

Just for shits and giggles, out of the following cases, guess which ones brought indictments.

2. In July of 2008, the New York Times revealed the name of the CIA interrogator who yanked information out of 9/11 terrorist mastermind Khalid Shaikh Mohammed.

3. In July of 2009, the New York Times leaked classified information about the NSA wiretapping program.

2. Michael Mukasey who was the Attorney General during the second term of George W. Bush, never sought punitive action against the liberal rag for deliberately endangering the CIA agents.  The information was given to the NYT and ABC News by John Kiriakou, who worked for the agency from 1990 to 2004.  He disclosed the name of the former colleague to a reporter, identified as Matthew Cole, formerly of ABC News. Kiriakou plead guilty to violating the Intelligence Identities Protection Act, and was sentenced to 30 months in prison. Whistleblowers should have their shit together when they go public with grievances.  Some are legitimate, others not so much.

3. Former NSA senior executive Thomas Drake, who leaked classified information to the New York Times about the NSA’s Trailblazer Project, was charged with lying, obstruction of justice, and violation of the Espionage Act of 1917. On 9 June, 2011 all charges against him were dropped. Drake and others within the NSA objected to the waste, fraud, and abuse in the program, and the fact that a successful operating prototype already existed.  It ran over budget, failed to accomplish critical goals, and was cancelled.

4. So far, no action has been taken against Dennis Burke for his libel. Of course, he was doing what Obama’s DOJ expected him to do.

5. Obama’s self-serving treason has never been dealt with by Congress.

Out of the five examples, Obama’s is the worst crime, with the New York Times leaks as a close second.

Bottom line: The selective scrutiny of the DOJ involves targeting right wing, conservative  Tea Party groups, pundits, and reporters.  Liberal allies are left untouched.  The only reason Obama’s AP lapdog got tagged by the DOJ, was because it published information about a foiled Al Qaeda plot, which runs afoul of Obama’s  “Al Qaeda? What Al Qaeda”? talking points.

No matter how much corruption or crime there is in the Obama regime, no media outlet, except for Fox news, and no Congressional committee has demanded impeachment and/or prosecution.