Andy Ngo compiled a list of hate crime hoaxes that have been orchestrated during the first term of President Trump. It illustrates the sick, pathetic lengths to which the Left will go to get attention and try to elicit sympathy from an ignorant population of Trump haters.

One week before the presidential election, a black church in Mississippi was burned in an arson attack. “Vote Trump” was written on the building. After much panic, an investigation revealed that the man responsible was a church member.

Trump & his supporters were blamed for a spate of anti-Semitic, KKK & Nazi graffiti on the campus of Nassau Community College in Long Island in late 2016. The student responsible was Jasskirat Saini.

In Sep. 2018 a black woman in Long Island said Trump supporters confronted her & told her “she didn’t belong here.” Her car tire was slashed the next day & a hateful note was left behind saying “go home.”
Adwoa Lewis made up the whole story.

In Nov 2018 students at Goucher College demanded social justice training & safe spaces after racist, Nazi, & KKK graffiti was found on campus. Someone even wrote the names of black students. Trump was blamed.
Fynn Arthur, a black student, was responsible.

There’s lots more at the thread.

The airforce academy discovered that racial slurs were a hoax after the superintendent ranted like an idiot at 4000 cadets.

Jussie Smollett, gay actor and attention whore, decided to hire a couple of Nigerian brothers to physically ‘attack’ him on a street in Chicago and fling some racial slurs for extra emphasis. Now that the whole scheme has fallen apart, the little pouf has hired a ‘crisis management team’ to handle his concocted disaster.

Moonbat Nancy Pelosi made her Twitter rant regarding the Smollett incident disappear, but not before it was saved in a screenshot: 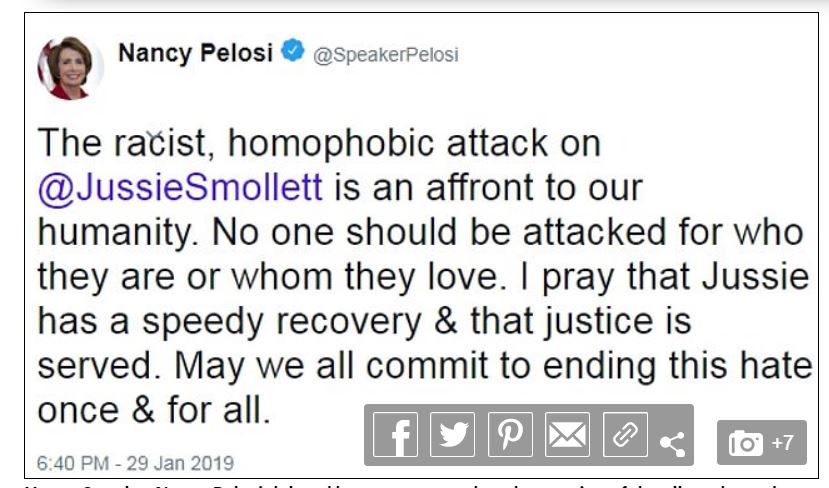 The black woman accosted by Trump supporters hoax at a Philadelphia gas station.

The guy who spray-painted “Heil Trump” on his own church hoax in Indiana.

Whole Foods wrote “fag” on my cake hoax in Texas.

The white guy paints “nigger lover” on his own garage and sets his own cars on fire hoax in Texas.

The man who wrote racist slurs on his own car hoax in Kansas City.

The non-white guy who wrote racist slurs in a bathroom hoax in Missouri.

The waiter who wrote a racist note to himself hoax in Texas.

The waitress who wrote a racist note to herself hoax in Texas.

The woman who slashed her own tires and wrote a note to herself hoax in Long Island.

The student who wrote racist notes to herself hoax at Drake University.

The black church burned in the name of Trump by a black parishioner hoax in Mississippi.

The Great Chipotle Race Hoax of 2018.