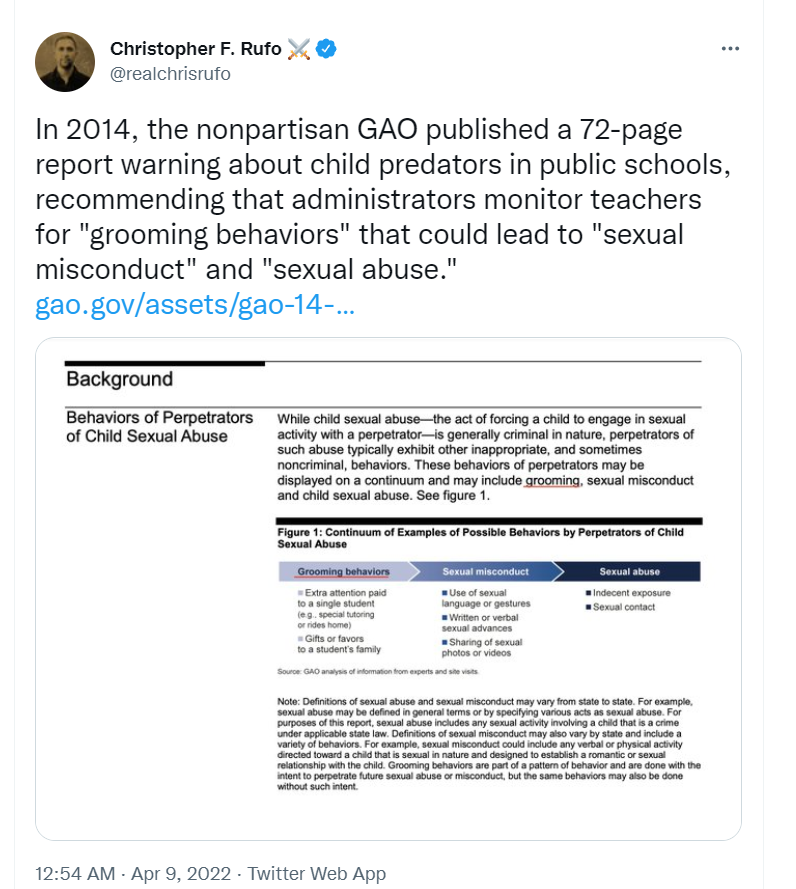 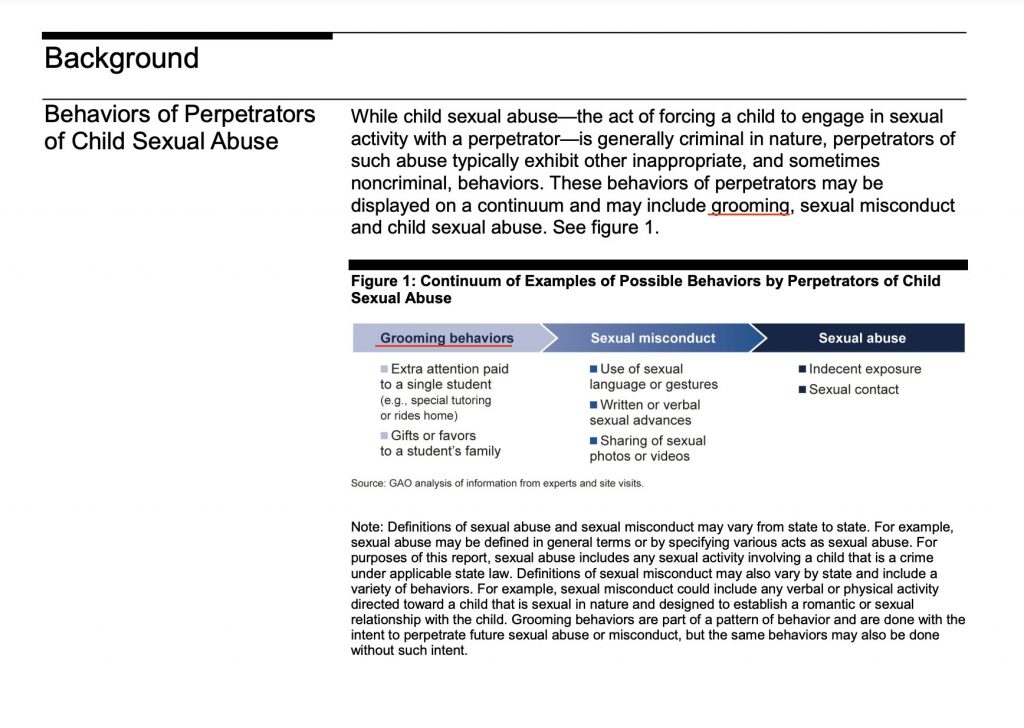 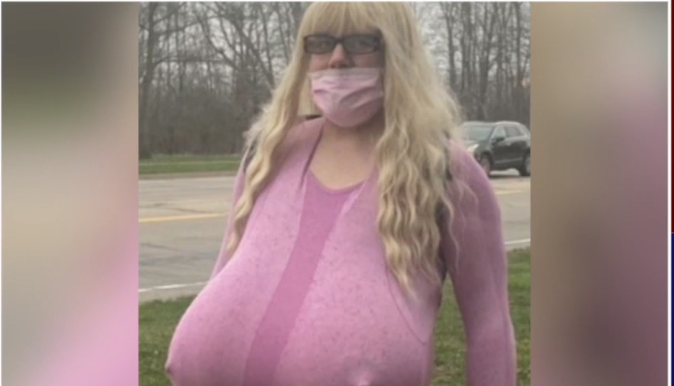 For several days, a number of media organizations  — including a Canadian media outlet that visited the school — reported the teacher’s identity as Stephen Hanna. Oakville Trafalgar High School made no attempt to correct those reports. They wanted to protect the fetishist and child abuser in their school.

But after our segment, the Halton District School Board in Ontario emailed us to say that, contrary to these multiple reports, which we cited, the teacher in question is not named Stephen Hanna. At the same time, the school Board refused to tell us who the teacher is. The school said, “We cannot confirm the identity of the individual in the photos/videos/radio segments.”

Why not? It’s a man abusing children in the classroom. He doesn’t deserve protection.

But the school board, along with Oakville Trafalgar High School, has decided to protect child abusers. In fact, Oakville Trafalgar High School has institutionalized child abuse. The school’s policies state that “dress codes must prevent students from wearing clothing that exposes or makes visible genitals and nipples.” But that policy explicitly doesn’t apply to teachers, who are free to expose their nipples and genitals to students at will. And that’s exactly what they’re doing.

……Now, there have always been threats to children. In every society, there are people like this and every society deals with them swiftly and very harshly, but no longer in the West. Now, people like this are not punished. They are celebrated and then protected. Trafalgar High School, which is public, it’s funded by Canadian taxpayers, is vigorously defending his behavior and threatening anyone who notices, so is the Halton District School Board, which oversees the school.

They just sent us the statement and we’re quoting: “The school board recognizes the rights of the parents, staff, students, guardians, community members to equitable treatment without discrimination based upon gender identity and gender expression. Gender identity and gender expression are protected grounds under the Ontario Human Rights Code.” Oh, the Human Rights Code. Really? Where are the rights of the kids? There are none.

In other words, if you complain, if you’re a parent who complains about Stephen Hanna enlisting your children in his sexual fantasies, you are the criminal. You are breaking Canadian law. For the most part, the Canadian media, the most supine media that speaks English, are siding with Stephen Hanna, the sicko. Other than the noble exceptions of Jonathan Kay, who we just quoted, and a small feminist blog called “Reduxx,” nobody is covering what this teacher is doing to kids.

The rest are effectively defending it. Toronto Sun, for example, went with this headline: “School board prepares for backlash over trans high school teacher.” Oh, backlash? Trans high school teacher? He’s protected. No, he’s a freaking weirdo wagging fake breasts in the face of your children because it titillates him and if you complain about that, you’re the problem.

There are hospitals and healthcare corporations that push ‘gender affirming‘ programs, hysterectomies, and transgender surgeries on minors.

……The pharmaceutical companies can’t be sued, so they’re safe. They no longer have to care even about oversight. They sponsor the media companies that cover them. Big Tech censors anyone who asks questions about what they do. Payment providers swoop in to shut down the businesses of anyone who dares to criticize Pfizer. That’s happening.

So, the net effect is sad. Never has American medicine been more transparently a racket than it is right now. With the most basic ethical guidelines gone, completely ignored, you should not be surprised to learn that some hospitals have decided to monetize the mental anguish of children.

Consider the University of California at San Francisco Hospital. Supposedly, it is one of the best in the world. UCSF, despite its august reputation, is not even trying to behave responsibly with children who are being convinced by TikTok they should change their sex.

So, a new trend comes along propelled by social media. It didn’t exist before at scale. Now it does. Rather than pausing and asking, “What is this and how can we help the children?” They blow right past it.

UCSF Hospital’s current guidance for treating so-called transgender youth is this. We got this right from their website, “As youth are transitioning at increasingly younger ages, genital surgery is being performed on a case- by-case basis more frequently in minors.”

Genital surgery on children — this is a very big step. It’s irreversible. So, you wonder, what is the medical basis for this? Well, a few sentences later, UCSF hospital admits that there is no medical basis. Instead, “In the absence of solid evidence, providers often must rely on the expert opinions of innovators and thought leaders in the field.”

So, UCSF is conducting genital surgeries on minors based on “thought leaders in the field.” What does that mean? Well, it means the Human Rights Campaign is in favor of it. It means activists are pushing it. It means there is no scientific data to justify it.

This is horrifying. Why is this happening and how widespread is it? No one seems to be interested. Virtually alone in our media, Matt Walsh of “The Daily Wire” decided to find out the answers to those questions and in that search, he obtained this video. It’s from 2018.

The video shows a physician called Shayne Taylor from Vanderbilt University Medical Center, which, like UCSF, has a global reputation for excellence. In this video, Taylor explains that Vanderbilt performs gruesome sexual surgeries on children. Why? Because those surgeries make Vanderbilt money.

DR. SHAYNE TAYLOR, VANDERBILT UNIVERSITY MEDICAL CENTER: “Some of our VUMC financial folks in August of, sorry, October of 2016 starting a couple of years ago, put down some costs of how much money we think these patients would bring in and this is only including top surgery, this isn’t including any bottom surgery, and it is a lot of money.

These surgeries make a lot of money. So, female to male chest reconstruction could bring in $40,000.00. A patient just on routine hormone treatment who I’m only seeing a few times a year can bring in several thousand dollars without requiring a lot of visits and labs. It actually makes money for the hospital.”

……So, what would happen if a physician at Vanderbilt, a conscientious objector, disagreed with mutilating children for profit? That’s a key question.

Another doctor called Ellen Clayton explained what would happen. Again, this video we’re about to show you has also been around since 2018, but no one in the media cared to look at it until Matt Walsh found it this week.

ELLEN CLAYTON, VANDERBILT UNIVERSITY MEDICAL CENTER: “If you’re going to assert conscientious objections, you have to realize that that is problematic. You are doing something to another person and you’re not paying for the cost of your belief.

We are given enormous, if you don’t want to do this kind of work, don’t work at Vanderbilt.”

So, if you object to this, leave; “You can’t work at Vanderbilt.”

So, Vanderbilt clearly thought this through. Not everyone is going to be for this, so let’s just make it really, really clear. If you’re not fully on board with sexually mutilating children for non-medical reasons, on the basis of no medical evidence, then you just leave.

But that wasn’t enough. They anticipated that this is so horrifying that some doctors might still step out of line. They might tell 16-year-olds that they have a psychological disorder or “This will pass or maybe stop watching so much TikTok” and “No, we’re not going to mutilate your genitals or cut your breasts off, at least until you’re an adult,” but if they said that, that would of course, hurt the business model, so Vanderbilt recruited activists, trans activists, to bully physicians into submission.

Rejecting the promotion of transgender ideology gets you fired.

Read the rest of that article at the link. It will turn your stomach. The medical community has turned into an industry of child mutilation for profit. The “First, do no harm” concept in the Hippocratic Oath has been eradicated for money.

“Gender identity” and all the insane concocted ‘pronouns’ did not originate with kids or mentally stable people. Kids don’t think of that shit on their own.  It started with unhinged lunatics who pushed this abnormal behavior in the media and in schools. People are sick of it and they’re fighting back. What’s really funny is the hissy fit thrown by these freaks after their videos are exposed by LibsofTikTok and other sites.  Simply posting their insanity for everyone to see is enough to bring a meltdown.

Made-up pronouns are being used like snap-on tools.  These psychologically damaged people switch from “he, her, she, ze, zir, it, they, binary, fluid, non binary”, and a host of other nonsensical bullshit that they use to describe themselves depending on their mood.  They actually believe they can magically change their gender with an invented ‘pronoun’. Some of them even refer to themselves as objects or animals. They’re all over TikTok making videos of their mental illness.  LibsofTikTok posts them every day.  Freaks used to be in a circus sideshow. Now, they’re out in public.

They’re all about grooming, concocted pronouns, and ‘gender identity’ indoctrination for kids.  They lack cognizance of the illegal and immoral aspects of this kind of activity.

There’s also a contingent of deranged parents who are just fine with pushing this shit on their young, impressionable children. Kids and teens are vulnerable. Their brains and bodies haven’t developed fully. Social media pressure drives some of these confused kids to believe that they should change their bodies to match.

If passages from a book in their own school library can’t be read aloud because they know it’s obscene, then it shouldn’t be there in the first place.

A parent read from the books ‘Gender Queer’ and ‘Lawn Boy’ at a board meeting and was shut down by a board member who says “that’s obscene.”

These books are obscene for adults yet they continue to be available for children in @JCPSKY schools. How does this make sense? pic.twitter.com/i7Md3eNuCO

They should be focusing on science, math, history, reading and writing instead of turning classrooms into grooming factories. Bat-shit crazy leftwing teachers brag about how they incorporate their sexualized ideology into the curriculum without parents’ knowledge or consent.  Teenagers should be taught life skills such as filling out a job application, surviving on a budget, balancing a checkbook, not subjected to a warped teacher’s ideas on sexuality.

Children don’t have the capacity to understand the complexities of sex or the perverted projections of the Left. It’s up to the parents to monitor the subject matter and the teaching methods being used in schools.

Draw the line and raise hell if it’s crossed.