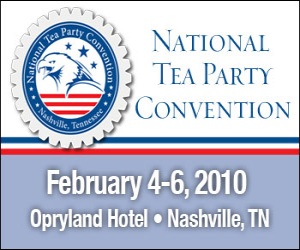 UPDATE:
Former Alaska governor Sarah Palin wrapped it up with the keynote speech.

Some of the best quotes:

The Tea Party movement is a “ground-up call to action that is forcing both parties to change the way they’re doing business.”

The Democrats’ agenda is “out of touch, out of date, and if Scott Brown is any indication, it’s running out of time.”

In a slap at Obama’s chickenshit approach to Islamic terror:

“We can’t spin our way out of this threat…”to win that war, we need a commander in chief, not a professor of law standing at the lecturn.”

Andrew Breitbart from Big Government gives the MSM both barrels at the Convention:

UPDATE: The Tea Party Convention which has been in full swing in Nashville since Thursday, will conclude today with a keynote speech from Sarah Palin.

A few of the events:

The opening-night speaker at first ever National Tea Party Convention ripped into President Obama, Sen. John McCain and “the cult of multiculturalism,” asserting that Obama was elected because “we do not have a civics, literacy test before people can vote in this country.”

It’s stupendous. And maybe even colossal. Several hundred journalists are chronicling the National Tea Party Convention, now under way despite efforts by the New York Times and other news organizations claiming the event was racked with discord.

Some have advice for the exuberant movement, which will grow even more so when the Tea Party Express III – a monthlong cross-country bus tour – begins next month.

Tea Party Nation is pleased to announce the First National Tea Party Convention to be held February 4-6, 2010 at the Gaylord Opryland Hotel in Nashville, TN. The convention is aimed at bringing the Tea Party Movement leaders together from around the nation for the purpose of networking and supporting the movements’ multiple organizations principle goals. This event will be co-sponsored by other national groups that believe in a responsible and limited federal government that is responsive to all the people. National Taxpayers Union, Smart Girl Politics, and SurgeUSA are just a few of the organizations who will be on hand to contribute their time and talents to this convention.

Special Keynote Speaker for the event will be Sarah Palin, Governor of Alaska (2006-2009) and 2008 Republican Vice Presidential Nominee.

Tea Party Nation (or TPN) is a user-driven group of like-minded people who desire our God given Individual Freedoms which were written out by the Founding Fathers. We believe in Limited Government, Free Speech, the 2nd Amendment, our Military, Secure Borders and our Country!

Please join us, make and form strong bonds, network, and make plans for action. We are doing what we could not do alone, to preserve that which we value.

This is going to be great; it will definitely have an impact on policy and our current socialist regime. The frothing leftwing nuts like Keith Olbermann, Chris Matthews, and Anderson Cooper have tried desperately to marginalize The Tea Party with epithets and smear campaigns. It hasn’t worked; the Party has more respect and credibility than all the members of the MSM, Congress, and Senate combined.

The Democrats and their MSM lackeys were shocked to think that ordinary Americans would have the gall to speak out against bad legislation, corruption, extortion, bribes, and the jack-booted tactics on the part of THE ONE’s regime.  How dare we?

The condescending, pompous main stream media effetes are so apoplectic over the protests of patriotic Americans, they are often reduced to spit-flecked rants. Matthews accuses the Party of being “all white”; flinging the worn-out race card.  I took a look at some photos from the  Tea Parties, they sure don’t look “all white” to me: http://pajamasmedia.com/instapundit/76986/

David Brooks accuses us of not being in sync with the “educated class”.  Anderson Cooper spun the crude “teabagging” insult.

Mocking nicknames would never be slapped on a group of illegal aliens agitating for greater welfare benefits. That level of elite contempt is reserved for middle-class folks who object to paying for those benefits. The media covers Tea Parties with the same condescension they show to any unseemly spectacle of tax serfs refusing to “pay their fair share.” To those who believe all virtue resides in the compassionate power of the State, resistance always equals greed.

I would add that in this case, resistance equals ‘insolence’ on the part of the ‘ignorant, uneducated masses’ who surely don’t get that THE STATE knows what’s good for us.

If you think the Left is experiencing seizures now, just wait until we give these assholes the heave-ho during the Congressional/Senate elections this year.