Meet the newest member of the NYT editorial board. She’ll fit right in.

The New York times sure can pick ’em, eh?

You KNOW this gal is a blast at birthday parties …

We grabbed his screenshots from the tweet so you can see them here, and yeah, they’re some of her greatest hits. 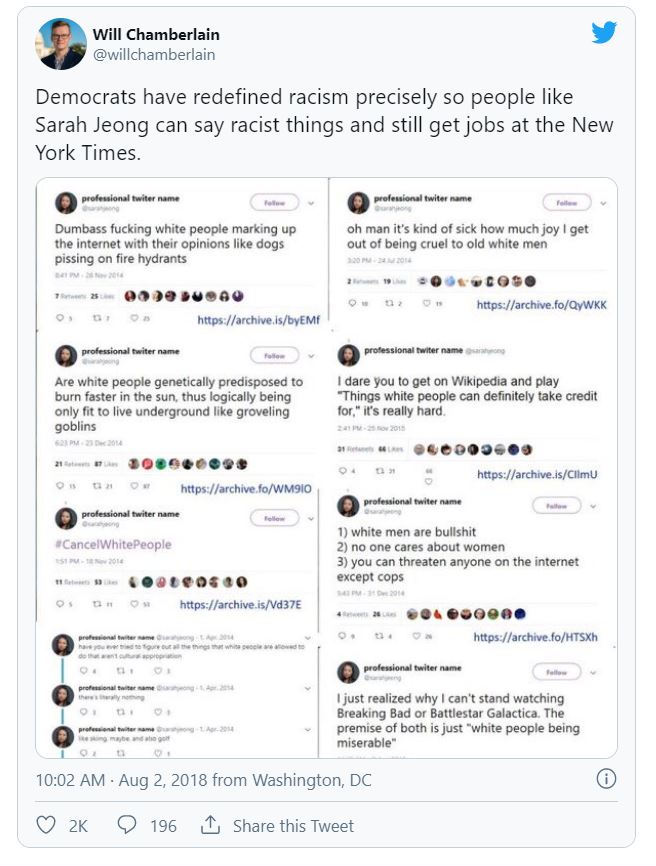 Makes you wonder if NYT actually did see these tweets.

Wait, what are we saying, you know they did … in fact, it could be one of the reasons they hired her. 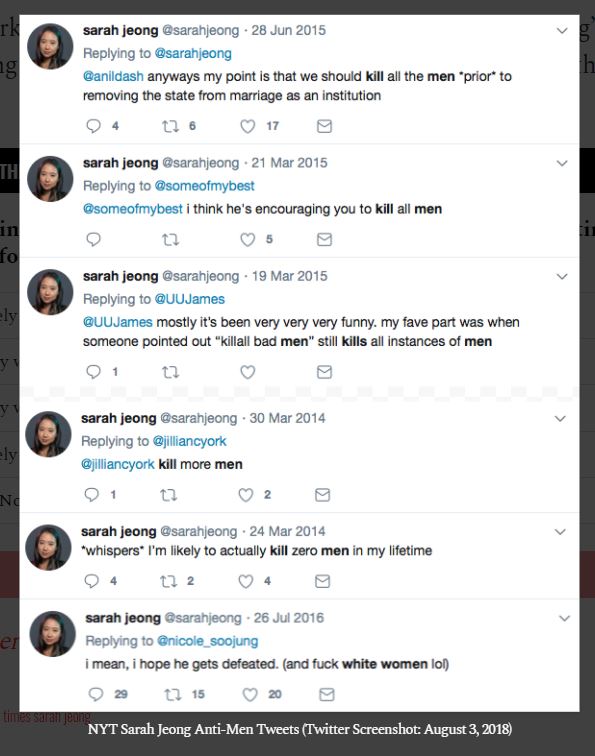 Of course, they stand by the new racist editor:

The New York Times is standing by its hiring of tech writer Sarah Jeong despite several derogatory tweets of hers aimed at white people, which were recently unearthed on her Twitter account.

“Oh man it’s kind of sick how much joy I get out of being cruel to old white men,” Jeong wrote in July 2014 in one of several old messages that have gone viral.

Social media reactions first flared on Wednesday with images of incendiary tweets from an unverified Twitter account that looked to belong to Jeong. They surfaced shortly after The Times announced she was joining the paper. The Times issued a statement on Thursday declaring that it had reviewed her social media history during the hiring process and was standing by the decision to bring her aboard.

“We hired Sarah Jeong because of the exceptional work she has done … her journalism and the fact that she is a young Asian woman have made her a subject of frequent online harassment. For a period of time she responded to that harassment by imitating the rhetoric of her harassers,” The Times said in a statement. “She regrets it, and The Times does not condone it.”

Uh huh. She regrets that the internet is forever and she got called out.

For an anti-white bigot, she sure had some strange friends:

The New York Times seems to be going through a redux with its latest hire of Sarah Jeong — who The Daily Caller News Foundation has just learned also had multiple correspondences with the white nationalist hacker Andrew Alan Escher Auernheimer, better known as “weev.”

Tweets discovered by TheDCNF show a number of tweets tagging and conversing with weev, previously known on Twitter as “rabite,” from September 2013 to September 2014.

Jeong references weev’s litigation with the federal government and says how “awesome” it was that he “got the Supreme Court to invalidate the [Computer Fraud and Abuse Act],” in a tweet on September 26, 2014.

……In total, TheDCNF found at least 11 conversations on Twitter where Jeong had tagged Weev.

None of Jeong’s tweets seem to suggest an endorsement of weev’s white nationalist’s views, which didn’t become public until October 2014. Still, many close to the hacker or who were in-touch with the hacker community knew that he did not identify with the far-right overnight.

On Wednesday, The Daily Caller reported on Jeong’s history of racist remarks against white people. In one tweet, Jeong boasted about how “much joy I get from being cruel to old white men.”

The Times fired tech journalist Quinn Norton in February after old tweets surfaced of her making racist and homophobic remarks, despite being a self identified “queer activist.”

Hate, violence, and bilious rhetoric are part and parcel of liberal bigotry.