Ted Wheeler has allowed Antifa thugs to inflict destruction at will. 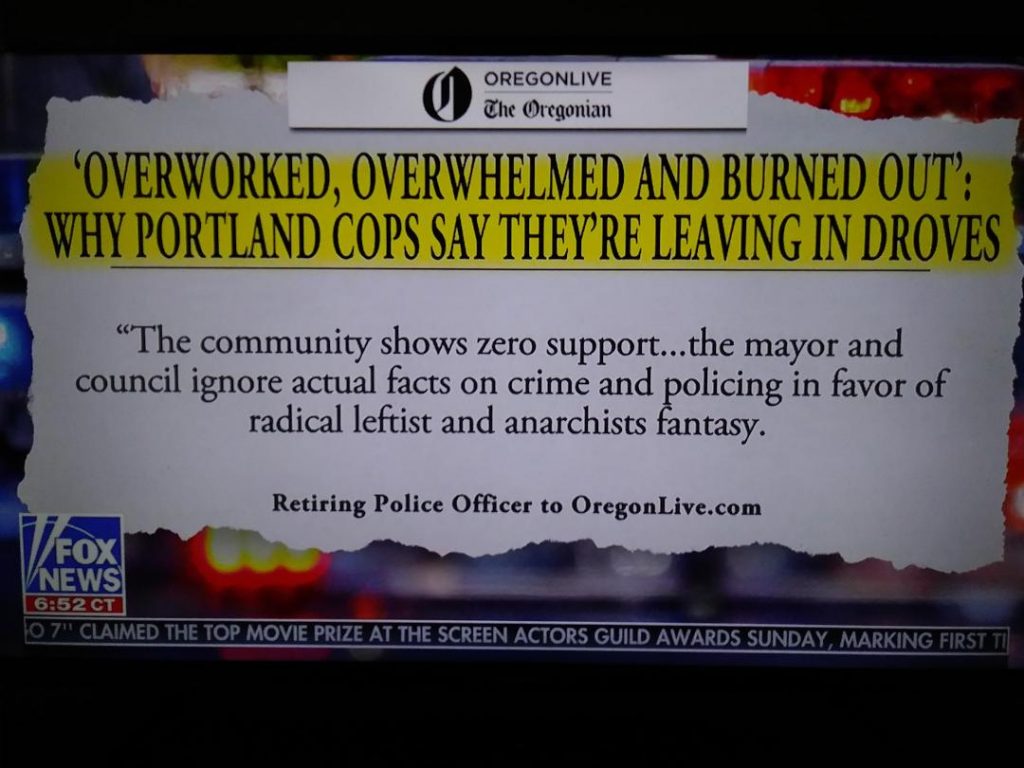 Police officers in Portland are resigning or retiring in record numbers, citing a hostile political climate and incompetence from city leaders.

Some 115 officers have left the force since July 1 of last year — the highest in at least 15 years. As of March, 93 officer positions remain open, as well as 43 civilian positions, according to a report.

A review of exit interview forms from former officers shows broad dissatisfaction with the treatment of law enforcement in the city.“What the city council has done to beat down the officers’ willingness to do police work is unfathomable,” a retired training officer wrote, according to the Oregonian. “I have never seen morale so low. Officers leaving mid-career and sometimes sooner to go to other agencies. Officers retiring when they would have stayed longer if the situation were different.”

Minority officers, such as Jakhary Jackson, said he joined the force to “make the most out of my life by helping others” and cited his father and aunt’s work in law enforcement as an inspiration.

When called to protect the city during last summer’s riots, he said he felt constant hatred from his community. At one point, he was hit by some sort of explosive while white protesters belittled him.

“People are leaving due to not believing in the mission any longer — feeling of hopelessness for a once thriving city,” one officer wrote.

The officer retention problem in Portland mirrors a phenomenon plaguing cities around the country. Surveys of department vacancies concluded that nearly half of 50 major cities saw senior law enforcement officials leave their posts in 2020.

Cities such as New York saw a 7% decrease in officers, with others such as Colorado Springs failed its recruitment goal by 25%.

Similar to those in Portland, officers in other cities say a lack of support from city leadership is making their job nearly impossible.

The Portland mayor signed off on a bill last year that slashed the police department’s budget by millions, even as violent crime rose. Some precincts in the city have seen shootings spike by 104%.

By the beginning of March, the city already saw 20 homicides — compared to just one at this point in 2020.

Law enforcement officials defended their department when asked about the uptick in resignations, saying blame lies on politicians.

“We understand why the previous Council voted to make significant cuts and changes to the Police Bureau,” a letter from the mayor read. “We acknowledge the serious reforms and major changes that need to occur in policing. However, we also believe defunding the Police Bureau without replacement programs and interventions caused a vacuum and put many people at risk and caused others to assume there was no accountability.”

What did they expect?

The Antifa/BLM goons responsible for the destruction of businesses, police stations, and the courthouse in Portland, just skated out of any legal consequences for their crimes.  The Feds refuse to prosecute.

Expect more of this in the next four years.