Dragged from hiding in a drainage pipe, a wounded Moammar Gadhafi raised his hands and begged revolutionary fighters: “Don’t kill me, my sons.” Within an hour, he was dead, but not before jubilant Libyans had vented decades of hatred by pulling the eccentric dictator’s hair and parading his bloodied body on the hood of a truck.

……Bloody images of Gadhafi’s last moments raised questions over how exactly he died after he was captured wounded, but alive. Video on Arab television stations showed a crowd of fighters shoving and pulling the goateed, balding Gadhafi, with blood splattered on his face and soaking his shirt.

Gadhafi struggled against them, stumbling and shouting as the fighters pushed him onto the hood of a pickup truck. One fighter held him down, pressing on his thigh with a pair of shoes in a show of contempt.

And doncha know, Amnesty International stuck its bleeding heart into the fray:

Amnesty International urged the revolutionary fighters to give a complete report, saying it was essential to conduct “a full, independent and impartial inquiry to establish the circumstances of Col. Gadhafi’s death.”
http://news.yahoo.com/pulled-drain-pipe-gadhafi-shown-no-mercy-000156671.html

No request for an inquiry into the atrocities committed by the son of a bitch while he was in power, though.

A U.S. Predator drone was involved in the airstrike on Muammar Qaddafi’s convoy Thursday in the moments before his death, a U.S. defense official told Fox News.

The official said the drone, along with a French fighter jet, fired on the “large convoy” leaving Qaddafi’s hometown of Sirte. A French defense official earlier said about 80 vehicles were in the convoy — the official said the strike did not destroy the convoy but that fighters on the ground afterward intercepted the vehicle carrying Qaddafi. He was later killed, reportedly in the crossfire between Qaddafi supporters and opponents as he was being transferred.

……U.S. engagement in Libya consisted mostly of aerial missions. More than 70 U.S. aircraft were involved in the Libya operation — throughout, the U.S. conducted a total of 145 Predator strikes in the country, in addition to thousands of other aerial missions. The United States has stepped up the use of Predator drones in several other countries, including Pakistan and Yemen. A drone was credited with killing American-born radical cleric Anwar al-Awlaki in September.

Though the attack Thursday started with an aerial strike, Qaddafi died of wounds suffered during his capture near Sirte, according to a spokesman for the National Transitional Council in Libya.
http://www.foxnews.com/politics/2011/10/20/obama-qaddafi-death-ends-long-and-painful-chapter-in-libya/

I’ll believe it when I see the corpse.

Well apparently, here it is, the capture and the killing.

Libyan strongman Muammar Qaddafi is dead, according to a spokesman for the National Transitional Council. Qaddafi died of wounds suffered during his capture near his hometown of Sirte, Reuters and Sky News reported. U.S. officials say they are working to confirm the NTC’s claim.
“Qaddafi is dead. He is absolutely dead … he was shot in both legs and in the head. The body will be arriving in Misrata soon,” media spokesman Abdullah Berrassali told Sky News.

Information Minister Mahmoud Shammam said he has confirmed that Qaddafi was dead from fighters who said they saw the body. He said he expects the prime minister to confirm the death soon, noting that past reports emerged “before making 100 percent confirmation.”
http://www.foxnews.com/world/2011/10/20/muammar-qaddafi-captured-in-libya-commander-says/

And justice for the victims of Pan Am 103 and Lockerbie. 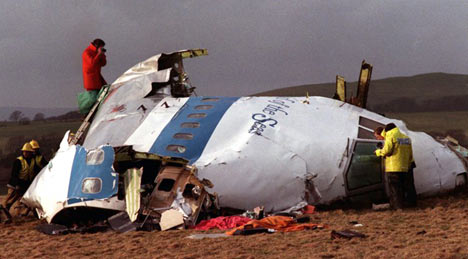 Icing on the cake would be the painful demise of Abdelbaset Ali Mohmed al-Megrahi, who was responsible for planting the bomb.