On Sunday’s AM Joy on MSNBC, frequent guest Elie Mystal of AboveTheLaw.com made the kind of statement about a “majority of white people” that would be considered blatantly bigoted or racist if aimed at any other group, as he stated that it is necessary for Democrats to “destroy” whites who support President Donald Trump.

Mystal — who has had a reputation for making incendiary comments in his MSNBC appearances over the past year — made his comments during a segment in which panel members got to rail against whites who support President Trump.

……”Remember, this is a facet of white America, right? Racism and oppression always come with an economic argument attached to it, right? I’m sure if we went back in the day, like, Antebellum Cycle, were saying, ‘Well, I’m not in it for the slavery, but I do want those cheap, cotton tees,’ right? Like I’m sure that’s what was happening, right?” 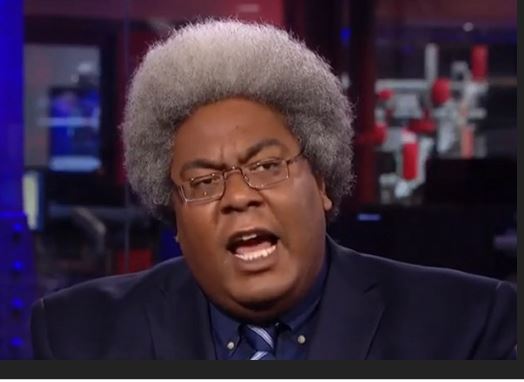 We are not afraid of your threats, Elie.  You can spew all the racist hate and rhetoric you want, we will reelect President Trump in 2020.

BTW: There are lots of black and Hispanic Trump supporters who will vote for him again.

Sucks to be you, fat fucknut.