Twitter’s venture into the fact checking business is off to a bumpy start.

Among employees at Twitter that have donated to political campaigns and causes, 99.8% of funds went to Democrats. And their fact checking skills are about as well advised as their politics.

Trump’s tweet apparently in need of fact checking pointed out the obvious fact that mail-in voting will lead to an increase in voter fraud. Our government just sent out tens of thousands of stimulus checks to dead people, but we’re supposed to believe they won’t similarly drop the ball when sending out ballots? 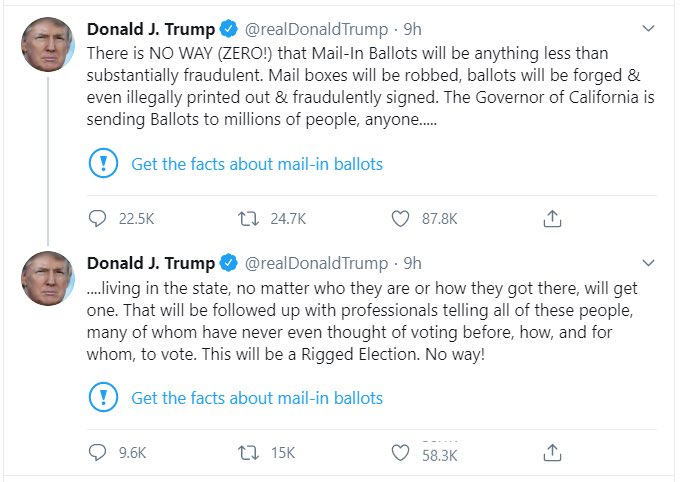 Underneath Trump’s Twitter added the disclaimer: “Get the facts about mail-in ballots.” The disclaimer claims “there is no evidence that mail-in ballots are linked to voter fraud,” and links to articles from the Washington Post, CNN and NBC calling Trump’s claim “unsubstantiated” – because they say so and we’ll have to take their word for it.

The “fact checks” are based on conflating mail-in voting with absentee voting (which the “fact checkers” are arguing isn’t susceptible to fraud). As the Wall Street Journal’s Dustin Volz wrote on Twitter: “There was an error in Twitter’s fact check of Trump’s vote-by-mail tweets, underscoring the challenge social media platforms face trying to arbitrate truth. It was corrected after an elections professional notified the company (and me) about the mistake.

Not only was Twitter comparing two different types of voting, the same day of the “fact check” news broke that a West Virginia USPS employee was charged with attempted absentee ballot application fraud. Which is odd, because we were assured mere hours earlier from Twitter.com that such behavior was impossible.

Twitter’s decision to selectively fact check the President’s tweets isn’t out of any concern for truth. If Twitter actually had a problem with factual accuracy, they would’ve included a warning on some of Trump’s posts alleging/trolling that Joe Scarborough murdered an intern by telling readers that such claims are unsubstantiated rumors. But those posts went un-checked, while the posts that could have an impact on the election got a botched fact check.

The head of “site integrity” is one of the worst bigots on Twitter.

Twitter support is run by an Antifa advocate who decides which user is a “nazi”.

Their main “fact-checker” regularly spews hate against President Trump, calling everyone from his press secretary to his voters, “nazis”.

Conservatives are routinely censored and banned while the left-wing lunatic fringe, racist minorities, and muzzie extremists,  get a pass.

Twitter is run by Dem donors and activists. As long as Jack Dorsey in charge, don’t expect that to change.