I’ve never witnessed a more out of control, bilious, vitriolic bunch of lefties.

They hate the military, they hate the country, and they hate the Constitution for the fact that it guarantees the rights of people they disdain; namely anyone who won’t agree with their agenda.

The Dem party is full of these assclowns.

A staff member in the district office of U.S. Rep. Paul Gosar, R-Prescott, retrieved voice mails Monday morning, which were left during the weekend.

There was a 36-second message on the phone from a woman, who was apparently not happy with the conservative congressman:

“So, the way I see it, since you supported a child rapist who has 65 years of crimes and you are doing shit about Covid, and I’ve had people die, I think it’s totally ok for me to come with my gun and shoot you in the head.

And we’ll make sure we’ll send lots of protestors your way too.

The woman, who was later identified as a retired school teacher who resides in Glendale, is under investigation by the U.S. Capitol Police, said Tom Van Flein, Gosar’s chief of staff.

Van Flein said he had no idea what the woman was referring to regarding a child rapist.

The caller, identified as Margaret Kathleen Spangenberg through caller ID, identifies herself on her Facebook page as a retired gifted teacher and licensed insurance agent, whose interests included elections and travel.

She posted a video of herself in January 2019, as she instructs a class of first-graders. The voice on the video is similar to that of the recording of her death threat.

……The tone of the death threat does not sound menacing, but rather that of a primary school teacher explaining nicely that she plans to kill someone.

……Van Flein said that he has not heard whether Spangenberg will be charged for allegedly making this death threat.

The Capitol Police issued a warning poster to Gosar’s office during the week, with a photo of Spangenberg, instructing staff members to contact the law enforcement agency if the woman should show up there.

“It looks like a wanted poster,” Van Flein said in a phone interview.

According to federal law, threatening officials including congressional representatives is a Class C or D felony, carrying maximum penalties of five or ten years.

Van Flein said this was the fifth death threat Gosar has received during the past ten years he has served in Congress.

“I don’t think anyone who threatened Gosar was indicted or convicted,” Van Flein said, adding that this most recent threat was the most blatant of all those threats. 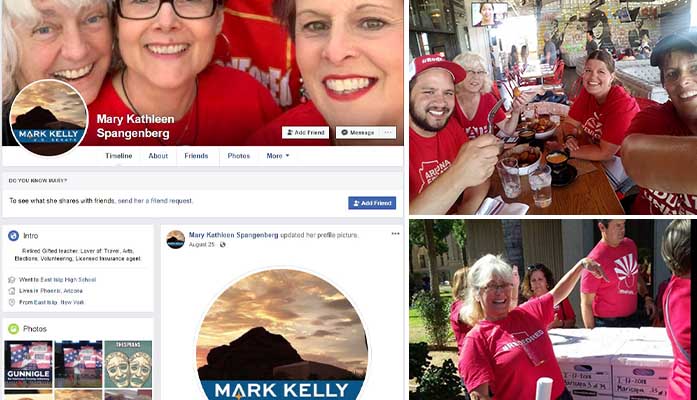 ……Spangenberg’s Facebook cover photo shows her with three other people, all dressed in red to support the Red for Ed campaign, a nationwide movement for more funding for public schools and teachers.

Her profile picture is Mark Kelly for U.S. Senate poster.

Van Flein said it was hypocritical and ironic for a Mark Kelly supporter to make a threat of this nature.

“His wife was shot in the head,” Van Flein said, referring to the shooting of U.S. Rep. Gabby Giffords, who was severely disabled by a gunman in a shooting in Tucson in January 2011.  “It is particularly despicable that she threatens a congressman like this.”

There’s been a steady barrage of death threats, assaults, and filth-laden tantrums on social media from unhinged leftwing journos, college professors, and disgruntled Dems who hate the fact that Trump was elected. Tough shit.

Bring it mutherfucker. We’re armed and we shoot back.