Two self-appointed enforcers of the Covid-19 rules, including a Huffington Post contributor, tried to bust fellow train passengers whom they caught drinking coffee without masks, only to back down when the crowd turned on them.

“I have 70,000 Twitter followers, buddy,” video journalist Sandi Bachom told the alleged coronavirus criminals as she filmed them on her smartphone. She and another woman encountered the offending passengers as they boarded a train at New York’s Pennsylvania Station. But the two men said they only removed their masks to drink coffee, and a video circulating on social media Tuesday shows other passengers coming to their defense.

“These men are just drinking coffee,” a woman says. “They’re allowed to have a mask off when they’re drinking.” Bachom, perhaps missing the point, says, “They weren’t wearing masks.” One of the men reiterates that they were drinking. The woman then says, “You know what’s safer than a mask? Social distancing. That’s more effective than the mask, so why don’t you step back and leave him alone?

Bachom, apparently lacking in self-awareness about her own behavior, tries to brush the woman away, saying, “You’re not involved.” The video then shows her trying to bring the conductor into the dispute, complaining that she had witnessed the men with their masks off. “Please, can you help us?” she asks.

“My favorite character in this one-act play is the train conductor,” Rebel News founder Ezra Levant said on Twitter.

The woman who defended the two coffee-drinkers happened to be conservative activist Ashley St. Clair, who filmed and posted the video. “People have lost their damn minds,” she told her 388,000 Twitter followers. “If you’re that scared, don’t travel. Stay home.”

It later came to light that the lead mask enforcer in the video was Bachom. “I didn’t think this video of Ashley St. Clair’s encounter with a mask Karen could get any funnier, but now it turns out the Karen is a Huffington Post contributor,” filmmaker Dinesh D’Souza tweeted.

St. Clair posted another video saying that the self-appointed Covid cop had apparently found her video on social media and came over to her seat to accost her. She posted footage of the second confrontation, in which Bachom rushes to her seat – also filming with with her own smartphone – to call her a “fu**ing doxing bitch,” adding “You Nazi bitch. You doxxed me.”

“I did not dox you… I posted a video of you on a public train. I don’t even know who you are,” St. Clair replies.

“Well, everybody knows now, all your little Nazi friends, your little conservative MAGA friends,” Bachom says, to which St. Clair responds “This is not a good look, honey.”

The deranged lunatic is pro-Antifa. Color me shocked: 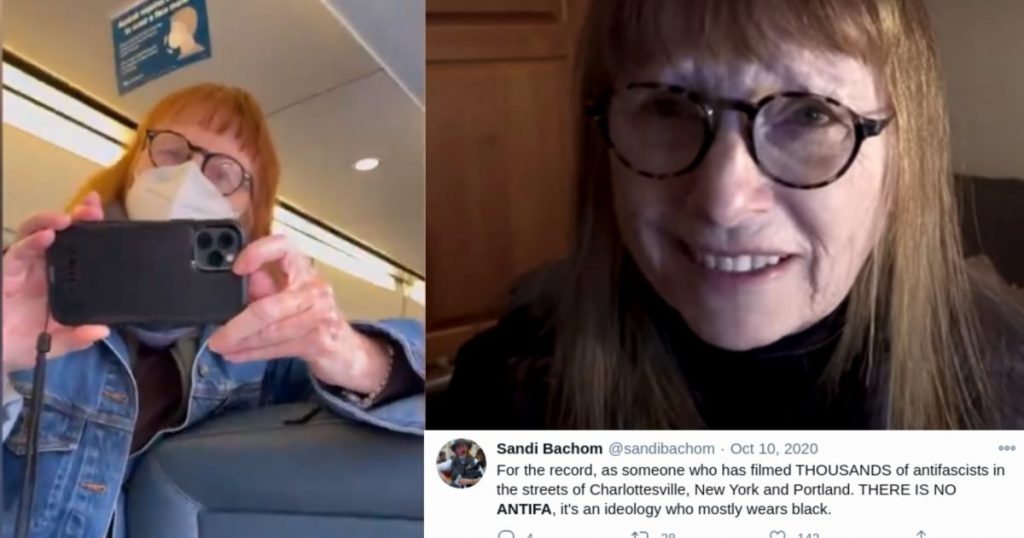 ……While at right-wing events, Bachom is well known, and is often welcomed alongside Antifa militants, who use her videos to target conservatives for harassment.

Most infamously, Bachom video taped an Antifa attack near the New York Metropolitan Republican Club on October 12th, 2018. Her video shows a group of Proud Boys getting into a scuffle from Antifa, which later video reveals was started when Antifa threw a bottle at the Proud Boys.

Prior to the fight, Antifa had vandalized the Republican club building the night before, stating that they would not “be civil” in a threatening note left at the steps of the building. The Antifa militants involved in the fight had circled around multiple blocks to intercept the Proud Boys. None of this was mentioned in her reporting.

Despite this, Bachom testified against the Proud Boys on trial in place of the Antifa militants, who never came forward to press charges. During her testimony, a source who was in the courtroom tells Big League Politics that she made a fool of herself, at one point bragging about owning a Rolex watch.

The best way to deal with leftwing bullies like Bachom is to shove their asses off a tall building.  It culls the herd and conserves oxygen for those more deserving.