Remind me again, how much time were instigators Tim Gionet, Luke Phillip Robinson and Ray Epps sentenced for?

On Monday, the longest sentence yet was assigned to a Texas man who was at the Capitol on January 6, 2021 in what his wife called a “political persecution,” but while some may feel intimidated by what many believe to be a miscarriage of justice, she offered impassioned words to others facing similar charges.

Guy Wesley Reffitt, 49, of Wylie, Texas was found guilty in March on multiple criminal charges that included obstruction of an official proceeding (the certification of the 2020 presidential election), entering and remaining in a restricted building or grounds with a firearm, obstruction of justice, and two counts of civil disorder.” At his August 1 sentencing hearing, Federal District Court Judge Dabney Friedrich sentenced him to 87 months in prison, three years of probation, and mandatory mental health treatment despite no assaults and never entering the Capitol.

Following the hearing, Nicole Reffitt, Guy’s wife, spoke with the press and in no uncertain terms praised her husband for his patriotism and character as she warned any who would listen that his sentence should be considered a blow to the constitutional freedoms of every American.

“No matter if you are a liberal, if you’re an independent, if you’re a Republican, this is not okay,” she said before a microphone with her daughters by her side. “This is what this is, is political persecution. We are patriots. Guy was a patriot that day. He will always be a patriot. And he’s a loving husband. He’s a loving father. He’s a man of integrity. And he went that day because the United States is the last great stand we have.”

“And if we allow our country to keep being driven into the ground by the corrupt, evil politicians here in this city, then one day at your kitchen table, FBI is gonna come in and tell you that you stood up at the school board meeting and you are now a domestic terrorist,” she argued referring to Attorney General Merrick Garland’s actions through the Department of Justice targeting parents at PTA meetings.

“So wake up, America. This isn’t just about Guy Wesley Reffitt. This isn’t about just 1/6. This is about our liberties being stomped on,” she added.

Julie Kelly, senior writer for American Greatness, has remained at the forefront of reporting on defendants charged for their association with the breach of the Capitol on Jan. 6 and she reacted in kind with Nicole Reffitt on social media posting, “Guy Reffitt will go to jail for more than 7 years for allegedly bringing a gun to Capitol grounds. He didn’t fire a shot, assault anyone or enter the building. Michael Byrd executed Ashli Babbitt inside the building. [He’s] not charged, still has his job and is a media hero.” 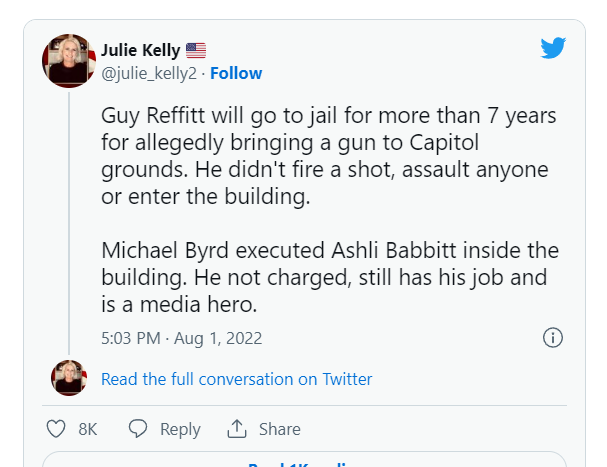 Reffitt’s daughters also spoke to the press and decried the “two-tiered justice system” contending “There’s not gonna be a 1/6er that will not be persecuted for their political ideology.”

In March, following her husband’s conviction, she had warned other 1/6ers to stick to their beliefs and not be intimidated by the justice system that wanted to make an example of them. “Don’t take a plea. Do not take a plea. They want us to take a plea. The reason that we have all guilty verdicts is they are making a point out of Guy, and that is to intimidate other the members of the 1/6ers. And we will all fight together.”

When questioned on Guy Reffitt’s apparent retraction of his own statements about the Justice for J-6 movement, she referenced that as proof that the court was strong-arming defendants.

“Guy always wanted to make sure that we were going to be able to have a roof over our heads,” she told the media. “I was a stay-at-home mother for 17 years, and that was a job I took seriously. And what Guy said under duress in there is one thing…He didn’t say those things just to raise money for us, he said those things because he believed them. Just because he wants to be persecuted because of his ideology and he had to backtrack in order to hope that the judge showed him some mercy.”

Ultimately, her message for all Americans was and has been, “The verdict today…is against all American people. If you’re gonna be convicted on your First Amendment rights all Americans should be wary. This fight has just begun.”

The Reffitt’s punk teenage son Jackson was recruited by the goons at the FBI to spy on his father. He literally recorded his family home for 8 days following his dad’s return from DC, and provoked his dad into debate, all at the behest of the FBI.

If the Reffitt’s are smart, they will disown that little son of a bitch and kick him out of the house before he sets up the rest of the family for Biden’s Stasi.