Obama’s efforts to hurt citizens and blame it on Republicans.

Obama’s pettiness is far-reaching.  He even shut down the Normandy American Cemetery and Memorial.

Speaking of petty, the LeftProg pigs in the White House staff and the media can’t hide their disrespect for veterans.

Obama also shut down the following American landmarks, so far:

The privately-owned property at Mount Vernon.

The Philadelphia tavern frequented by the Founding Fathers.

Commissaries on military installations are shut down. The golf courses, a place near and dear to Obama’s heart, remain open.

A new wave of veterans steps in to remove barricades:

A new wave of veterans were forced to move barricades at the WWII Memorial in Washington Wednesday morning to gain access during the government slimdown, a spokeswoman from Sen. Jerry Moran, R-Kan., told FoxNews.com.

The WWII veterans, from Ohio, Kansas and Missouri, arrived at the memorial one day after another group relied on the assistance from elected officials to move the barricades to allow access. Parks police did not prevent the first group from entering, nor did they interfere with Wednesday’s group.

The same veterans group that managed to storm the gates at the WWII memorial yesterday is planning taking on the fences at the Lincoln Memorial today. This sounds like a capitol idea, pun intended.

Both memorials are open air memorials. The Lincoln Memorial is open 24 hours a day, normally. If you’ll recall, it was wide open to having someone throw green paint on it in the evening a few months ago.

So that means the Obama administration is making a conscious effort to spend more in time and money to shut off something which is normally open.

The veterans are traveling as part of Honor Flight

, a program that enables World War II veterans to partake in an expense-paid trip to view the memorial. 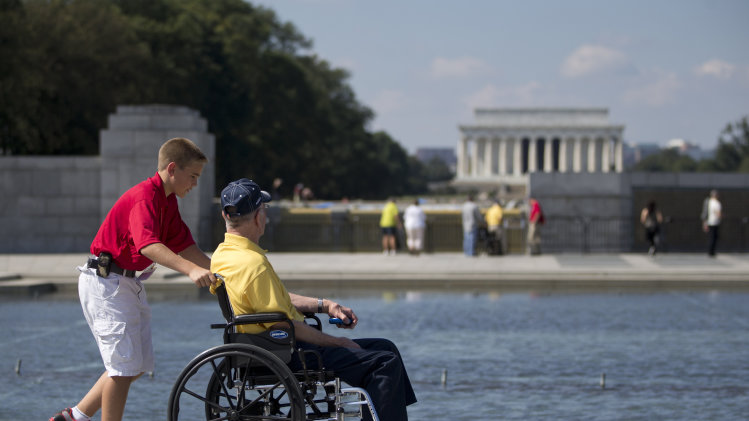 Obama knew about the request for the visit and rejected it.

What was meant to be a final gathering of heroes Tuesday instead became a final victory for dozens of World War II combat vets who refused to let the government’s budget battle block a visit to their memorial in the nation’s capital.

With bagpipers playing “Amazing Grace,” nearly 200 veterans from Mississippi and Iowa swept past barricades and security guards at the World War II Memorial in Washington in order to keep a commitment to visit the site, which was closed today due to the partial government shutdown. The veterans, in their 80s and 90s, were accompanied by Rep. Steven Palazzo, R-Miss., a former Marine who earlier vowed not to let the National Park Police keep them from a planned visit to the open-air monument.

“Well, I would have been so down-and-out if I got all the way up here and wasn’t able to get in,” Navy veteran Oscar Leroy Russell, 90, who is blind after he suffered a stroke, told FoxNews.com.

Some veterans on hand wiped away tears when they saw a crowd waving the American flag as they came out of their bus.

“These men and women didn’t cower to the Japanese and Germans,” Palazzo said. “I don’t think they’re about to let a few National Park Police stand in their way.”

HOOAH! Bless ’em. And kudos to Rep. Palazzo for not allowing Obama’s stupidity and pettiness to ruin their visit.