Adam, you got some ‘splainin’ to do.

From The Daily Mail

The ranking Democrat on the House Intelligence Committee was the victim of a prank phone call by Russian comedians who offered to give him ‘compromising’ dirt on Donald Trump – including nude photos of the president and a Russian reality show star.

DailyMail.com can disclose that after the prank, his staff engaged in correspondence with what they thought was a Ukrainian politician to try to obtain the ‘classified’ material promised on the call.

On an audio recording of the prank call posted online, Adam Schiff can be heard discussing the committee’s Russia investigation and increasingly bizarre allegations about Trump with a man who claimed to be Andriy Parubiy, the chairman of the Ukrainian Parliament.

The call, made a year ago, was actually from two Russian comedians nicknamed ‘Vovan’ and ‘Lexus’ who have become notorious for their phony calls to high-ranking American officials and celebrities, including UN Ambassador Nikki Haley and Elton John.

Its existence was first reported by The Atlantic but not how a staff member working for the minority on the House Intelligence Committee pursued the information after the call.

Schiff’s office said the congressman suspected the call was ‘bogus’ from the beginning and reported it to authorities afterward.

But in a recording of the eight minute conversation, Schiff appeared to take the call seriously – or at least played along convincingly – and emails from the Democrat’s staff to the fake politician afterwards said he had found it ‘productive’.

Correspondence: These are the emails one of the professional staff on the Democratic minority exchanged with the ‘politician’ and the material which the comedian said he sent to the staffer. 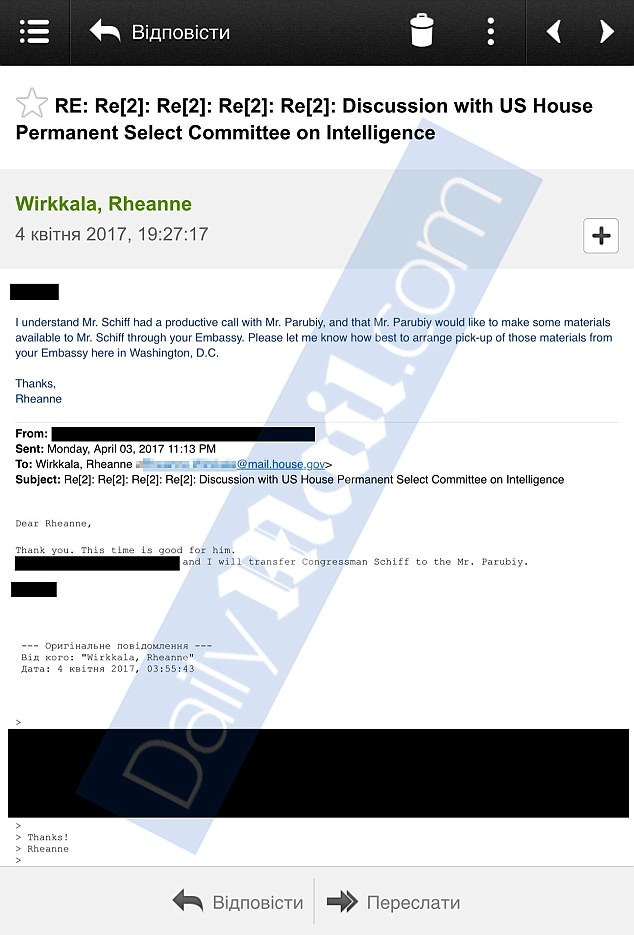 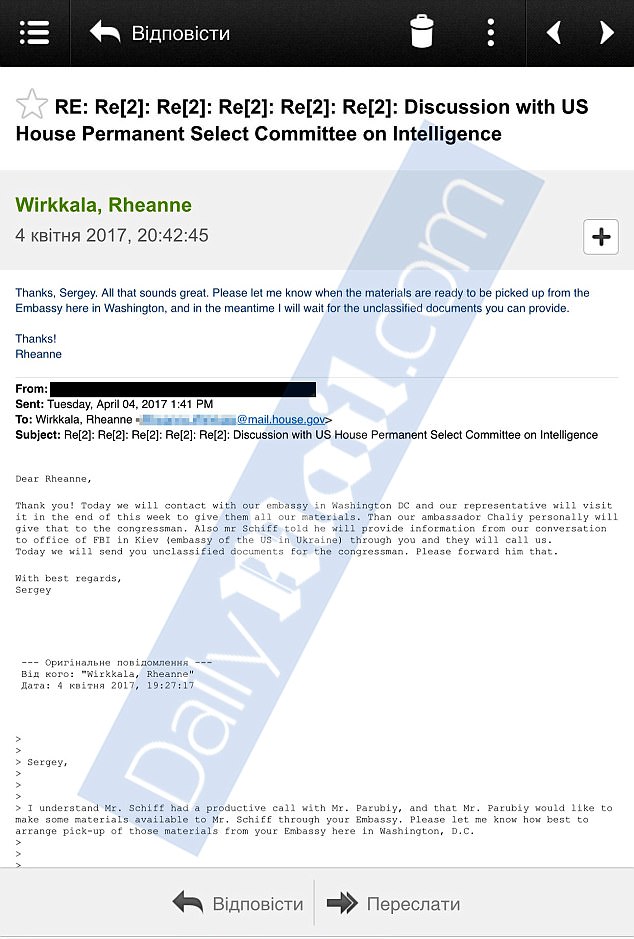 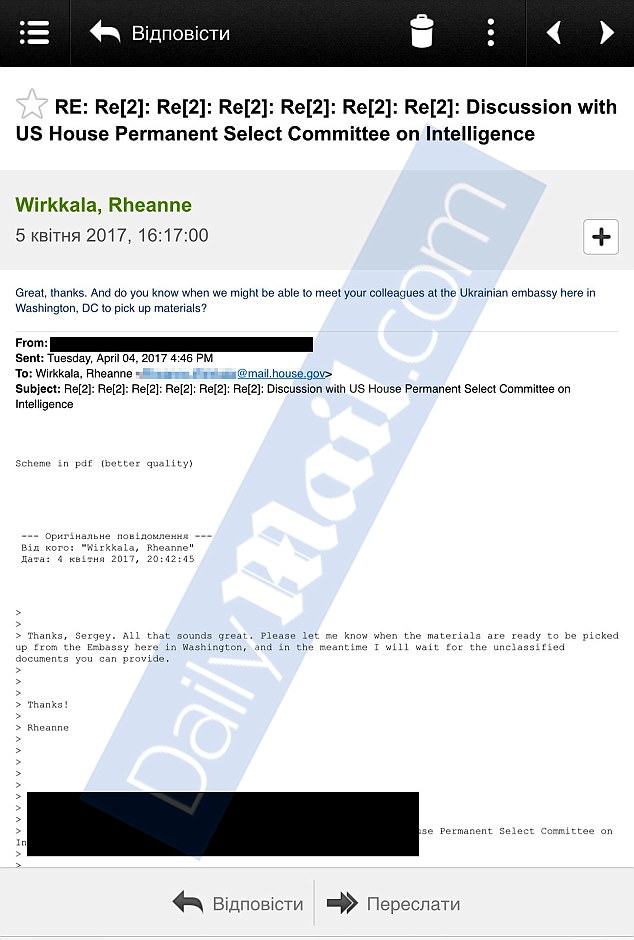 Schiff began the call by thanking the ‘chairman’ Andriy Parubiy for his time and warning him that Russian spies were likely listening in.

‘I would caution that our Russian friends may be listening to the conversation so I wouldn’t share anything over the phone that you wouldn’t want them to hear,’ said Schiff.

Vovan, who was posing as Parubiy, reassured Schiff: ‘I don’t think that will impact on our investigation.’

The fake Parubiy claimed the Ukrainian government had obtained recordings and documents that proved Vladimir Putin was blackmailing Trump with naked photos taken during an affair between the president and a Russian glamour model.

Vovan also claimed the Ukrainians recorded secret meetings between a Trump campaign aide and a famous Russian singer-turned-spy that took place at a non-existent mafia hangout in the Brooklyn neighborhood of Brighton Beach.

Schiff appeared to be taking notes on the conversation and repeatedly asked for spellings of names and documentation he could send to the FBI.

I’ll be in touch with the FBI about this. And we’ll make arrangements with your staff. I think it probably would be best to provide these materials both to our committee and to the FBI,’ said Schiff during the conversation, which lasted around eight minutes according to the recording posted to YouTube.

The phone conversation with Schiff took place early last April as the House Intelligence Committee ramped up its investigation into alleged Russian interference in the U.S. election.

Vovan and Lexus told DailyMail.com that it took them just 30 minutes to get the congressman on the phone after calling his office pretending to be Parubiy.

‘[Schiff] was pretty serious. He wrote all what we said on the paper. Remembered all the details,’ said Lexus.

Lexus said the congressman’s aide also followed up with them by email after the call and asked them to send the materials to the Ukrainian embassy so that one of Schiff’s staffers could pick up the documents.

The comedians claimed they would transfer the documents to Schiff through the Ukrainian ambassador to the U.S. Valeriy Chaly.

Lexus and Vovan provided emails to the DailyMail.com which appear to show Schiff’s staff discussing the documents after the call.

……During the call, the pranksters concocted an elaborate story about Trump having a tryst with a Russian glamour model named Olga Buzova after a Miss Universe pageant in 2013, which led to Vladimir Putin obtaining nude photos of the president.

Other individuals they claimed were involved in the scheme included a former Playboy model and Russian journalist named Ksenia Sobchak and Russian pop star Arkadiy Ukupnik.

Buzova ‘got compromising materials on Trump after their short relations,’ one of the pranksters told Schiff.

……The pranksters told Schiff that Sobchak was a Russian secret agent and Putin’s goddaughter, and claimed she gave the Russian leader the compromising pictures of Trump to use as blackmail.

……Schiff, seeming to have difficulty understanding Deribasivska, the name of a street in Odessa, asked the caller to repeat himself several times.

In fact Weather Is Good on Deribasovskaya, It Rains Again on Brighton Beach is the name of a 1992 Russian-American comedy movie about secret agents, with its title taken from the intentionally absurd passwords they use.

The street has slightly different names in Ukrainian and Russian and the comedian used the Ukrainian version.

Schiff eventually said he would have his staff call the Ukrainian legislator’s office later to ‘get spellings and more details on this.’

This is a transcript of the conversation: That is fucking hilarious. Schiff was salivating over the possibility of ‘compromising’ photos of a naked Donald Trump with a Russian celebrity.

They are that desperate.