The liberal media conglomerate will never cover this.

Aaron Mostofsky is a registered Democrat. He is the latest Antifa rioter who was identified at the Capitol on January 6th.
Mostofsky is a 34-year-old registered Democrat and the son of a New York Judge. He is seen in the picture above dressed in fur, carrying a stick and wearing a bullet proof police vest he had stolen. Mostofsky is standing beside the man who carried a Confederate flag into the event. This indicates they possibly knew each other and both appear to be outsiders and leftist demons plotting to smear Trump supporters. 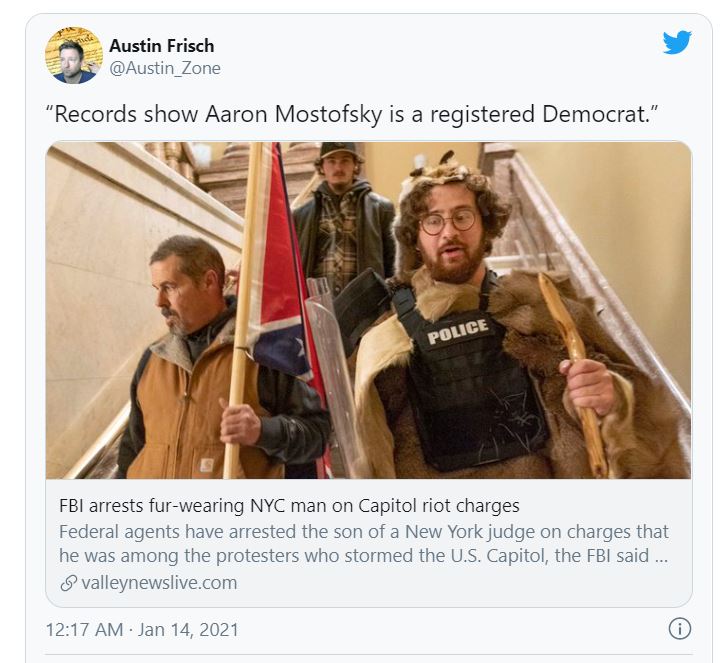 An anti-Trump activist has admitted that he was present in the U.S. Capitol during the recent riot there, claiming he was covering the event as an independent journalist.

The activist, John Sullivan, was also charged in Utah last year in connection with a counter-protest he organized in which an individual was shot.

Sullivan has been the subject of media scrutiny over the past two days due to his having been identified during the deadly Capitol riot spun off from a nearby pro-Trump rally; the activist can be seen in video footage depicting the shooting death of a female protester by Capitol police.

……Sullivan had earlier scheduled an anti-Trump event that took place just hours before the violent protests.

The website of Sullivan’s racial justice group Insurgence USA lists an event tilted “Dump Trump for Good” that was scheduled to take place on Wednesday, Jan. 6, the same day as the riot, at 11:00 a.m.

The event listing on the Insurgence website identifies it as taking place at the Washington Monument, which is located just several minutes’ walk from the U.S. Capitol. But Sullivan claimed to Just the News that the event was actually a digital undertaking.

“This was not a counter-protest,” he said. “This was more like an online forum.” Activists, he said, were calling area hotels as a counter-measure against what Sullivan said was the danger of violence from the pro-Trump protesters.

Asked for clarification, Sullivan said his group was trying to either get hotels to “shut down” to force out Trump supporters, or at the very least force them to follow COVID-19 masking guidelines.

Asked how he gained access to the Capitol, Sullivan said that he “climbed straight through a window that people had smashed.” Sullivan has already uploaded the full footage of his recording to YouTube, including of when the woman was shot.

In June, Sullivan was arrested in Provo, Utah, on various charges related to a counter-protest he helped organize; during those demonstrations, one man was shot. Sullivan on Friday did not immediately respond to followup questions regarding the status of those charges.

At least two known Antifa members were spotted among the throngs of pro-Trump protesters at the Capitol on Wednesday, a law enforcement source told The Post.

The Antifa members disguised themselves with pro-Trump clothing to join in the DC rioting, said the sources, who spotted the infiltrators while monitoring video coverage from the Capitol.

The infiltrators were recognized due to their participation in New York City demonstrations, and were believed to have joined in the rioting so that Trump would get blamed, the source said.

What we’ve seen so far and being physically present, Antifa clearly led the attack.  That was utterly obvious.  For instance outside during part of the attack, when there was much gas fired and rubber bullets, I’m not sure about that.  They were throwing flash bangs, that’s clear we were right there.  There was a lady on the mega phone saying ‘send up the mask, send up the mask’.  She said it over and over and so on our video and others, that’s a clear Hong Kong tactic that I’ve never seen in any other war and conflict.  Which is Hong Kongers would constantly say, send up water, send up mask, send up shields.”

John Earle Sullivan, who has advocated for an armed revolution on social media, was arrested in July 2020 for making a threat of violence and criminal mischief. He organized a protest with Black Lives Matter activists and members of the far-left Antifa network. According to the Deseret News, Sullivan damaged vehicles and urged people to block roadways. Video footage captured him threatening to beat a woman.

Photographs showed Sullivan inside the Capitol in Washington on Jan. 6. Sullivan has since given interviews claiming he took part in the illegal breach of the building as part of an effort to understand supporters of President Donald Trump. 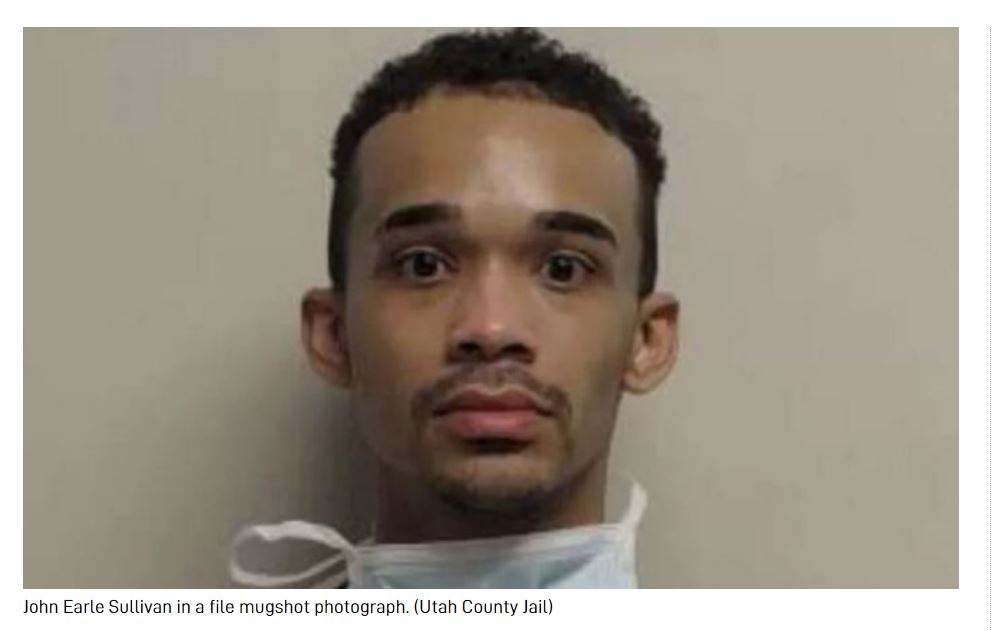 John Sullivan is a Black Lives Matter goon from Utah who was flown into DC during the planned “Stop the Steal” rally.

In August John Sullivan threatened to “rip President Trump from the White House” during violence in Washington DC. Sullivan was flown to DC for the protests.

The mainstream media and the Dem party are infected with leftwing militants who gloss over Antifa and BLM violence. They’re all part of the same effort to squelch free speech and resistance to the ruling class of elites.

CNN interviewed this criminal about the video but seemed to "forget" to ask him why he was there? And why he was arrested for violence against conservatives and starting riots in Utah!

The Daily Mail was to lazy to investigate too! https://t.co/qZ8Xm2Zjr3

Notice he organized BLM/Antifa to storm the Capitol on the 6th later then "catch and released" pic.twitter.com/0MvK8AdIiY

And he is staying at the same hotel where police harassed Trump-Supporters the night of the 6th for violating "6:00pm curfew" pic.twitter.com/70mrkew6Am 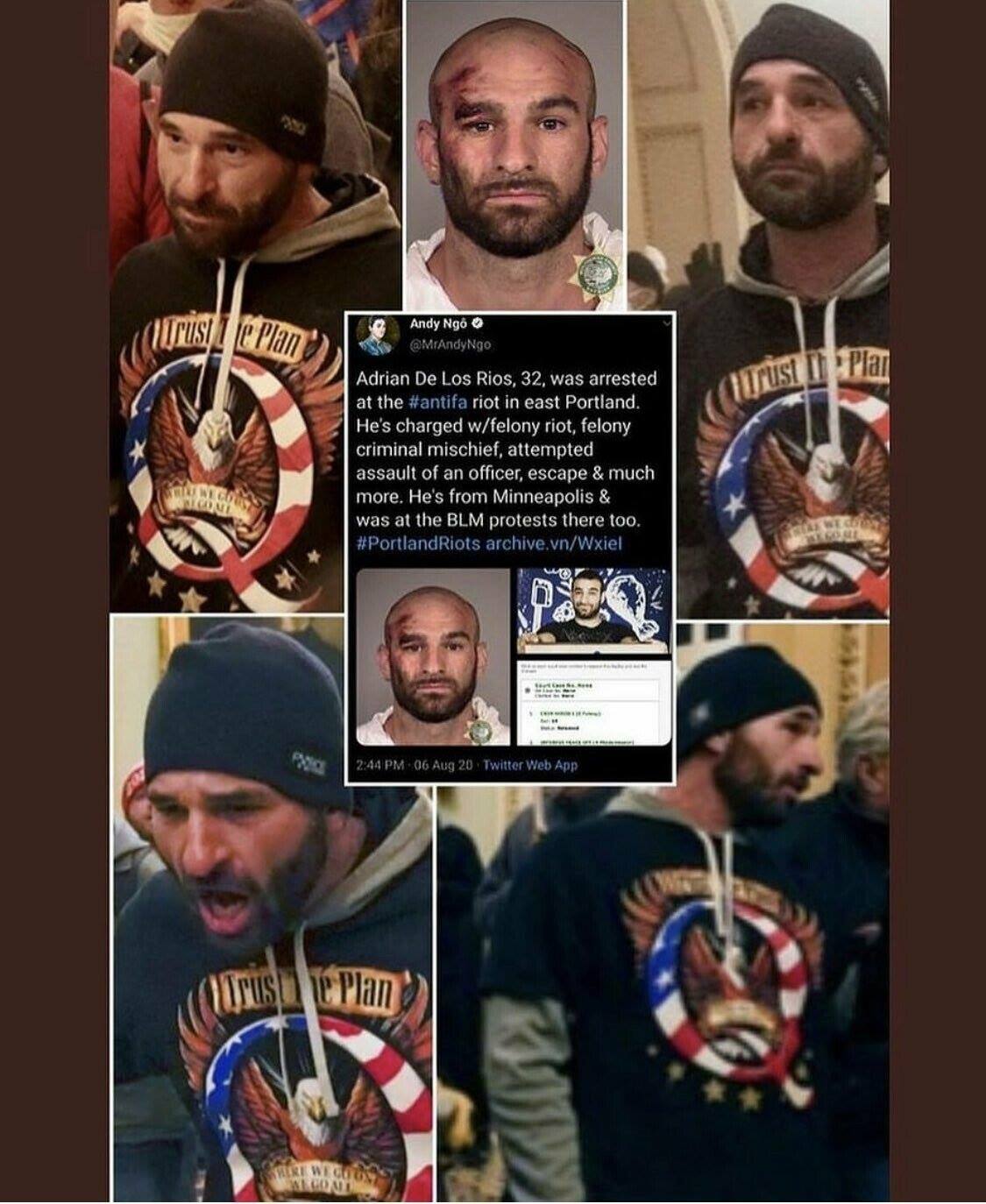 So much for “equal justice”.  Trump supporters are attacked, harassed, and censored for speaking out.

If you’re a Trump hater who incites murder, you get a pass.

And they think we’re just going to sit here and take it.  They’re in for a fucking shock.