I thought all this ‘resist’ shit was supposed to stop when the Left’s superhero got in the White House. 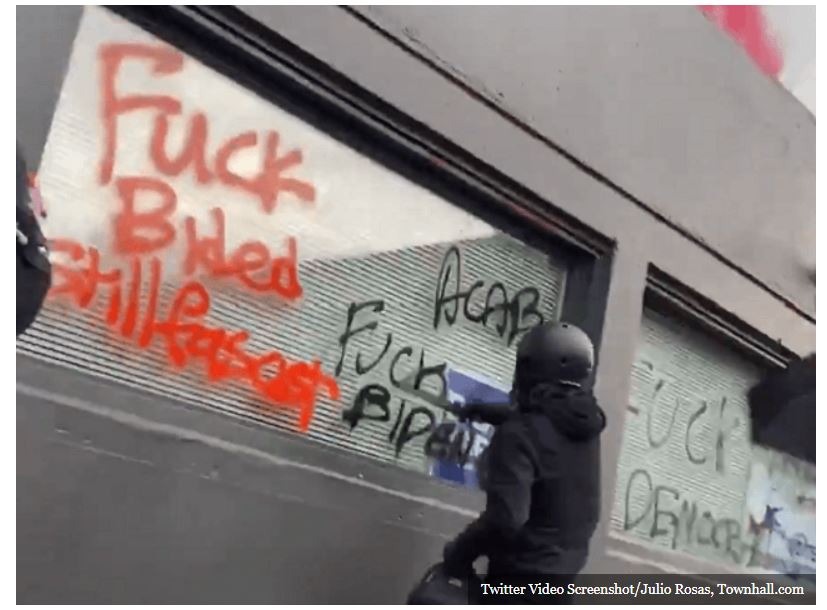 Far-left activists vandalized buildings and clashed with police in the Pacific Northwest on Jan. 20, voicing their opposition to the government, law enforcement, and the freshly sworn-in President Joe Biden, with some carrying signs reading, “We are ungovernable.”

In Portland, black-clad activists with their faces covered broke windows and the glass door at the Democratic Party of Oregon business office, spray-painting an anarchist symbol over the party sign, video posted on social media showed. Some of them tipped over garbage containers and lit the contents on fire, according to reports.

“We don’t want Biden. We want revenge for police murders, imperialist wars, and fascist massacres,” read a banner they marched under, while others carried a banner saying, “We are not governable,” which was dotted with anarchy symbols.

Portland Police confronted a crowd that gathered outside an Immigration and Customs Enforcement building near downtown, with some in the crowd later burning a flag in the street.

According to KATU, the protest was billed as a demonstration against the Biden inauguration and law enforcement. At one point, demonstrators were approached by Portland Police officers on bicycles, with some people in the group taking an officer’s bike and throwing objects at retreating police.

Eight people were arrested in Portland on charges that include rioting and reckless burning.

In Seattle, Antifa activists marched into the iconic Pike Place Market to smash up property, with video from the scene showing broken windows in a Starbucks. A group of black-clad activists marched along the street, kicking over garbage containers, carrying a tattered American flag with the anarchy sign spray-painted on it.

Some spray-painted buildings with an anarchist symbol and smashed windows, including at the William Kenzo Nakamura Courthouse, a federal building, according to KOMO.

“No Cops, Prisons, Borders, Presidents,” said one banner that they marched under, according to The New York Times.

Police announced that two people were arrested during the unrest, one for property damage and another for assault.

At one point they vandalized an Amazon Go store. Note the “Guillotine Bezos” tag: 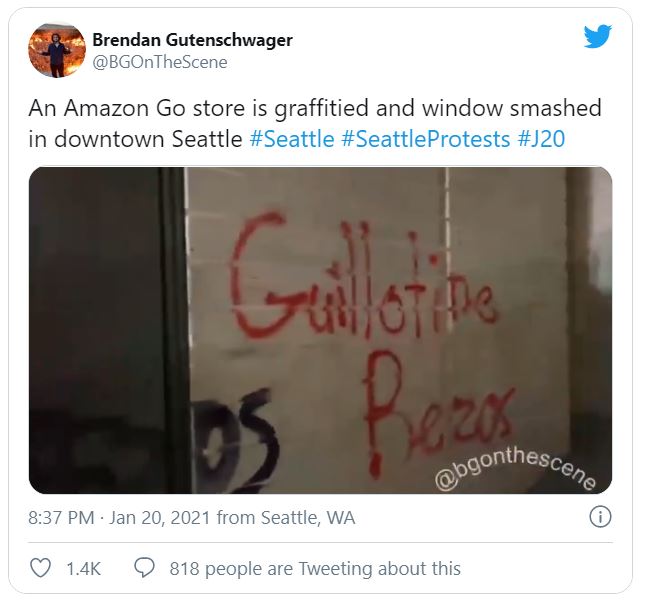 His White House occupancy will not stop the rioting Antifa/BLM thugs. They will take this as permission to continue their violence and destruction in Dem-controlled towns.

We’ll see if Biden or the rest of his Dem pals have anything to say after they encouraged the rampage for four years.