Isreal defends itself against acts of war by Hamas and the anti-Semites explode in rage.

“F___ the Jews! F__ their mothers! Rape their daughters!” they shouted through the streets of London. At the Holocaust Memorial in Amsterdam, Muslims issued the battle cry, a death threat to the Jews: “Khaybar, Khaybar ya yahud! J’aish Mohammed sa ya’ud!” (Khaybar, Khaybar, oh, Jews! Mohammed’s army will rise again! It is a reference to the 7th-century Muslim massacre of Jews in the Battle of Khaybar). Elsewhere in the Netherlands, Islamist groups flew the flag of the Islamic State, chanting “One state – the Caliphate!,” while in Berlin, demonstrators burned Israeli flags or flew the banners of Hamas.

Indeed, across Europe last weekend, in protests against the latest violence erupting between Palestinian militants and the Israeli military, thousands of Islamist extremists, members of pro-Palestinian groups, far-left activists, and neo-Nazis joined together in calls for the destruction of Israel and the Jews.

Every escalation of tensions between Israel and the Palestinians leads inevitably to anti-Israel (but never anti-Hamas) protests worldwide, with demonstrations becoming increasingly virulent in Europe – thanks to its growing Muslim population, its right-wing extremists who have gained popularity in the face of Muslim immigration, and the leftist extremists who have emerged to counter the growing right. They are three groups ideologically at odds in more than a few ways – be it support of or opposition to homosexuality and women’s rights, or pro- or anti-Islamist standpoints – but there is one area on which they all agree: Israel must be destroyed, and, as much as possible, the world’s population of Jews along with it.

The bottom line, according to Chancellor Angela Merkel’s spokesman Steffen Seibert, is “the fact that Jews in Germany cannot move around as freely and safely in some areas and in some situations as is the right of every citizen in Germany. And that makes us angry and it is shameful for all of us.”

But perhaps that shouldn’t really be surprising. “Every time the virus of antisemitism reenters our society, it masks itself as social justice – selling itself as speaking truth to power,” British Communities Secretary Robert Jenrick noted Monday.

The most salient word here is “masks.” After all, there have been no protests across European capitals calling for the destruction of China or the death and rape of its people even as China has detained over 1 million Uyghur and other Muslims in prison camps since 2017. It is the kosher, not the Chinese, restaurants whose windows are smashed open, the Israeli, not the Chinese flags they burn. And as Saudi warplanes drop bombs over the starving people of Yemen, prompting accusations of genocide, most “social justice” warriors have not lifted a single weapon, not even a voice, to fight them.

……Jews in the United States are also not immune. Tuesday night, a mob of pro-Palestinian supporters assaulted Jewish diners outside a Los Angeles restaurant.

As the protests spread to America, demonstrators chant the same ubiquitous, thinly-veiled call for Israel’s destruction, “from the river to the sea, Palestine will be free.” Social justice leaders – people like New York U.S. Rep. Alexandria Ocasio-Cortez – who so loudly and so rightly stressed that “Black lives matter,” now declare with equal vigor that “Palestinian lives matter,” but speak not a word about Jewish lives, even as Jews are disproportionately the targets of the vast majority of hate crimes both in America and abroad. In 2018, for instance, FBI determined that Jews, who comprise only 2 percent of the U.S. population, were the targets of 60 percent of all religiously-motivated hate crimes.

And across Europe, where Jews make up 1 percent of the population, 22 percent of all religiously-motivated hate crimes in 2019 were anti-Semitic. Notably, the number of hate crimes against Jews – 1,300 – was more than twice the number of hate crimes against Muslims, at 507. Since Hamas started firing rockets at Israel May 10, the United Kingdom has reported 116 anti-Semitic incidents, a 500 percent spoke over the same time last year, the Community Service Trust reports.

Biden shows his response by threatening to run over a reporter who asked about Israel:

Nice to know that Biden sympathizes with the PLO and anti-Semite shitbags in Congress. He was palling around with noted anti-Israel Congresswoman Rashida Tlaib on Tuesday. Tlaib wore a Palestinian flag to her election celebration.

Ilhan Omar, the muzzie rep from Minnesota, has expressed abject hatred for Israel and wants it wiped off the map. Omar took her oath of office on a fucking Quran, and married her own brother to get him into the country.

Anti-Semitic violence is happening all over the United States.

A band of pro-PLO goons attacked Jews in Manhattan’s upper east side.

Jews attacked in LA, NYC & other cities across America. You can be 100% sure the media would’ve pinned this on Trump if he was president. Now they say nothing as AOC, Tlaib, Omar & co incite racial & religious hatred. pic.twitter.com/MzMsyUXF25

Lots of anti-Semitic hate in the liberal media:

“Adeel Raja, who lists himself as a ‘Freelance Contributor at CNN’ on his LinkedIn profile, appears to have published several articles for CNN’s webpage,” The Washington Examiner reported. “According to the LinkedIn profile, Raja has held the position from August 2013 until the present day. His most recent byline for the outlet appears to have been from Sept. 16, 2020.”

A review of Raja’s Twitter account shows that he linked to the articles he wrote on CNN, and took credit for writing them. A spokesperson for CNN said that they had “never heard of him” and that they were “looking into it.” CNN later admitted that he reported for the far-left news organization. 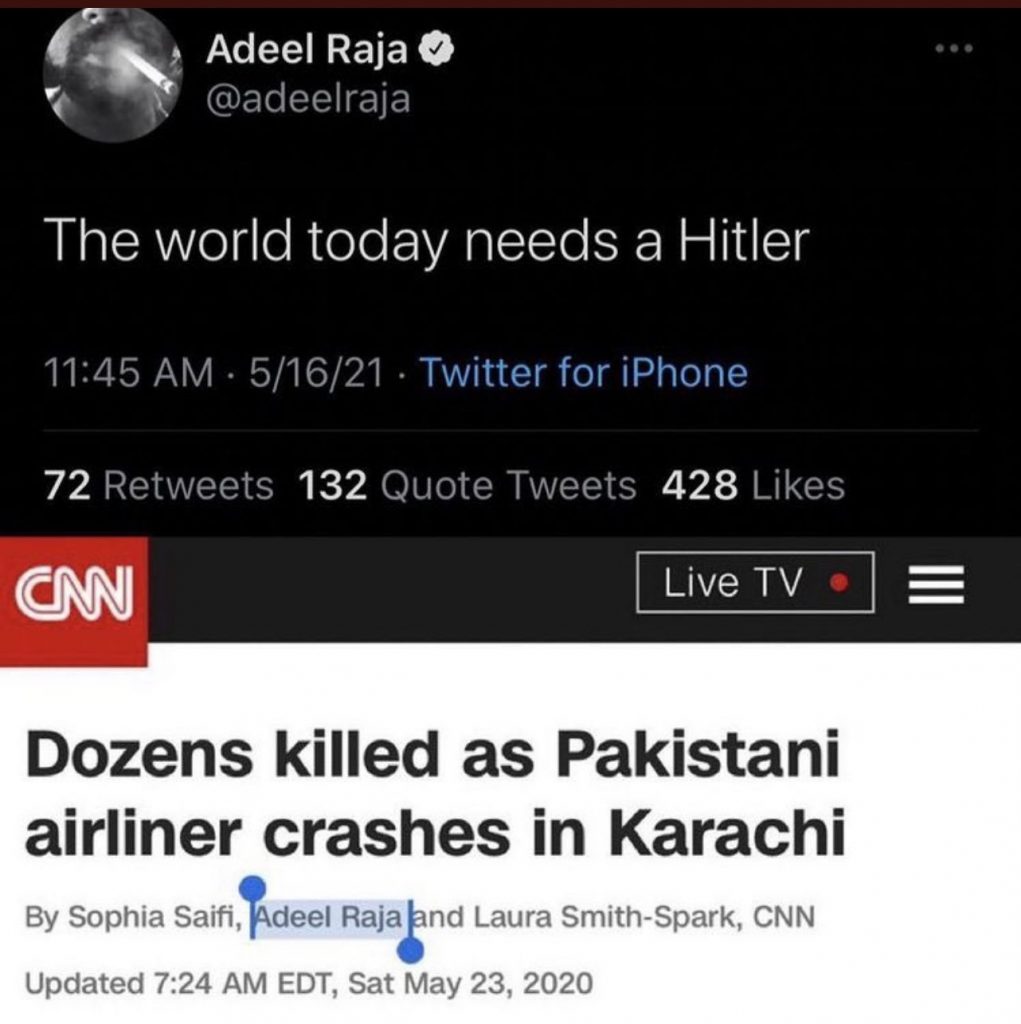 The DemProgs, like Biden, sympathize with every terrorist group in the world because they have a lot in common.  America is reviled and needs to be destroyed to make way for their global government.