The country’s power structure has turned into a nazi regime. This shit is just as despicable as it is insane.

Pregnant woman arrested in front of her children for planning a protest against the government lockdown.

On the third day of protests in Melbourne, Australia over COVID-19 lockdowns, police fired rounds of rubber bullets and teargas into fleeing crowds of people.
The protests stemmed from members of the Construction, Forestry, Maritime, Mining and Energy Union (CFMEU) resisting a government vaccine mandate requiring workers to get vaccinated, according to the Guardian. A small number of protestors initially gathered at CFMEU’s office in the central business district. There had been five reported arrests as of 11am local time.

As numbers swelled throughout the day, groups of protestors made their way down St Kilda Road towards Melbourne’s Shrine of Remembrance, where they sat on the steps outside.

……While some protestors left through the allowed exit made by police, others stood their ground or argued with officers to leave another way.

According to the Guardian, “Those who did leave by that route were fined $5,000 for breaching public health orders. But few agreed to depart.”

Word is, this is the Special Operations Group. They are police counter terrorism. They wear khaki now.

A squad of badgeless, balaclava’d paramilitary police jump out of an unmarked car. One of them does a very swift takedown move on a Melbourne tradie, and onlookers are speechless.

Apparently, if these guys arrest you, you have no rights. I have said it before, I will say it again. If Australia is the Global Covid Regime’s testing ground for the rest of the world, Melbourne is the epicentre. No pun intended.

So, rest of the world, this is coming to you. 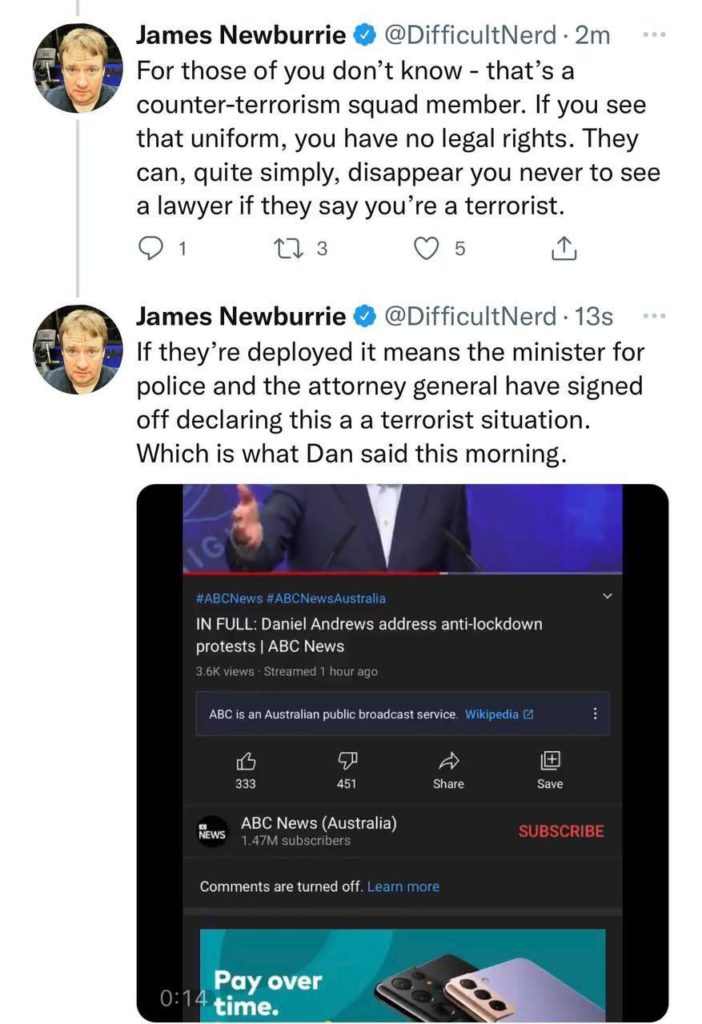 Citizen: ‘Why r u doing this? Policies are killing people.’

Gestapo: “I agree with u, I'm just doing my job…I'm just as over this lockdown as you are mate, but this is my job. Im not skilled to do anything else.”

It comes down to that? pic.twitter.com/18XaRfeDOE

The situation in Melbourne boiled over on Tuesday as thousands of construction workers and regular Australians amassed at the Parliament to protest against Vaccine mandates.

This is not the western world. This is a totalitarian hell.

But something that is not immediately obvious from the American vantage is that this isn’t all of Australia, the whole country is not locked down. In Australia, most of the lockdowns are in the eastern part of the country, that’s where the capital of the country is, that’s where the Federal government has the most control.
The western part, the less populated part of Australia, meanwhile, which is home to most of the country’s national resources isn’t locked down at all. Fifty thousand fans just crowded inside a stadium for a rugby match in Perth, the capital of Western Australia. No one was beaten with night sticks or hosed by the police.
The rugby match was not a super spreader event. Western Australia has had virtually no cases of COVID. How does that happen? How does Western Australia not lock down, but remain virtually COVID free? Simple. By controlling its borders.
Western Australia did not let thousands of people stream in from anywhere they wanted to in the world, they’re not Texas. They didn’t care about protecting their borders, they weren’t worried about being called racist, it seemed commonsense, and it worked.
And here is the revealing thing, in Australia the Federal government is angry that Western Australia has closed its borders. They want that part of the country to open those borders. Really? Why would that be?
Well according to ABC News, Australia’s government is quote, “arguing that Western Australia’s internal border restrictions are a drag on the national economy,” end quote. Well, that’s kind of interesting because the problem with Australia’s economy right now does not come from Western Australia closing its borders, it comes from the lockdowns. Those are the biggest drag on the national economy ever conceived in Australia, so are those police SWAT teams beating people for going outside.
COVID mandates are a far greater threat to Australia’s economy and its social fabric than COVID itself.

After recent unrest throughout the country over the reimplementation of Covid mandates, Australian authorities have resorted to using brutal force against its citizens to ensure compliance.

Earlier this week, officers demonstrated exactly why they are being described as modern-day Nazis online by unveiling their newest crowd control tactic – Ambush the unarmed protesters and open fire with ‘non-lethals’ like rubber bullets and gas grenades as they flee.

……One protester can be seen getting shot in the back as they try to escape.  Officers can then be seen swarming in on the individual after he collapsed to the ground.

Protesters aren’t the only ones who need to be worried.

One man was stopped while he was shopping and mercilessly beaten to the ground before being arrested because he was too far away from his house according to the city’s lockdown policy.

Apparently, the beating was delivered over a case of ‘mistaken identity.’

#AUSTRALIA: In a case of 'mistaken identity' police pile on one man after assuming incorrectly he was attending the protests. He was masked up and shopping.
His crime?
He was at more than the allotted km distance from home. pic.twitter.com/GthjD1wBd6

Another shocking video shows people on the beach trying to enjoy the sunshine. Out of nowhere, they get ambushed by a large group of officers that begins violently arresting whoever they can get their hands 0n.

……One woman was viciously choked and thrown to the ground by an officer last year for the “outrageous” “crime” of not wearing a mask.

Just recently, the officer who committed the assault was found not guilty of any crime and allowed to return to duty as normal. Not only was he not charged, but the woman he assaulted was charged with assault and resisting police.

Oh, and she also had a medical mask exemption from the government health regime – a lot of good that did her.

Australia has turned into a fucking penal colony.