His disaster is off to a great start.

Biden used an executive order to kill the Keystone XL pipeline permit on his first day as president. The move, which was expected because Biden said he would do it, drew sharp criticism from Texas, where the pipeline would have ended in the Houston area. 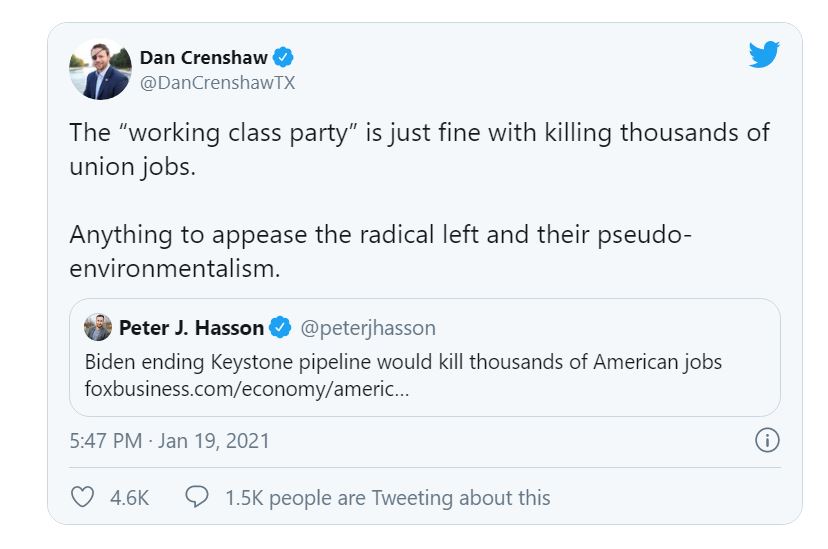 It’s how a Democrat president treats not only an ally, but American workers as well.

Canceling the Keystone XL also hurts the environment. The pipeline would have moved between 800,000 and 830,000 barrels of oil per day safely, off our roads and rails, from where it’s produced to where it can be refined. That was to be Texas, which leads the world in the clean and safe refining of oil into products the modern economy depends on every single day. So some of the jobs lost were in Texas, about which Biden will not care, as Texas did not vote for him.

With the pipeline canceled, Canada will find other customers for its oil. That’s likely to be China and India, two of the world’s fastest-growing and most energy-hungry economies. Instead of being transported safely via the Keystone XL pipeline, the oil will be transported by trucks and ships — both of which emit far more gunk into the atmosphere than pipelines, and both of which are far more prone to accidents and spills. It’s likely to be refined outside the United States, where standards do not match U.S. EPA standards.

Joe Biden killed thousands of jobs, hurt relations with a close ally, and hurt the environment on his first day in the job, while also violating his promise to put science first.

Biden was spotted going maskless at the Lincoln Memorial on Wednesday night — hours after signing an executive order mandating the use of masks on federal land to battle the coronavirus pandemic.

The newly inaugurated president went bare-faced not only during a televised address to the American people, but also outside the context of the speech, as he stood at the foot of the memorial, C-SPAN footage shows.

The clip showed Biden standing before the towering statue of the nation’s 16th president, another person a short distance to his left at an angle that obscures whether they too were unmasked.

The lapse in coronavirus safety precautions by the 78-year-old president came just hours after he signed an executive order mandating masks on federal property.

How does it feel to know that the Dems kicked you to the curb after being used as props against a fake threat? 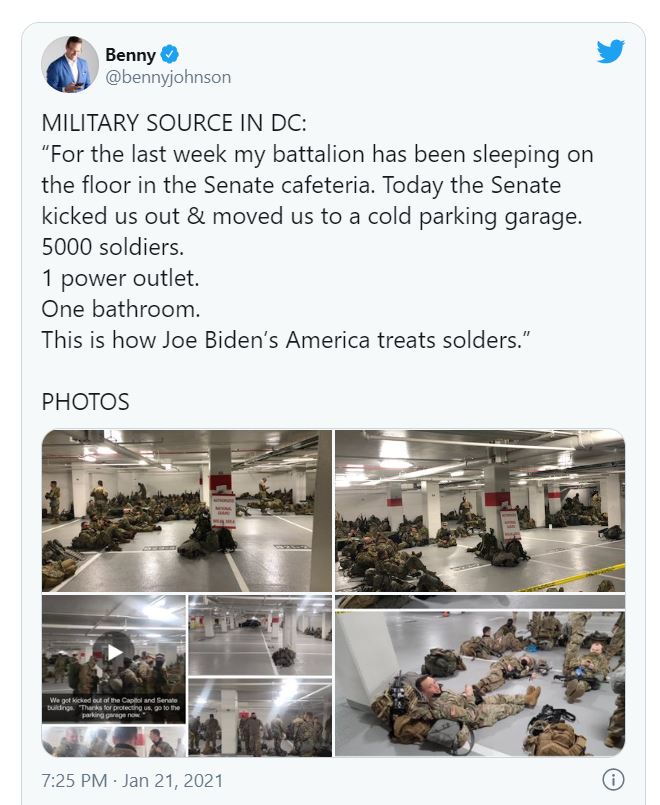 The thousands of National Guardsmen stationed at the U.S. Capitol and nearby congressional buildings were abruptly told to vacate the premises on Thursday.

The report cited a Guardsmen whose unit was suddenly told to vacate the Dirksen Senate Office Building where troops had gathered following a long couple of days at the Capitol complex. The 5,000 troops in the unit were reportedly forced to “rest” on the hard floors of a parking garage that lacked internet reception, contained a single electrical outlet, and a lone bathroom with just two stalls.

“Yesterday dozens of senators and congressmen walked down our lines taking photos, shaking our hands and thanking us for our service. Within 24 hours, they had no further use for us and banished us to the corner of a parking garage. We feel incredibly betrayed,” a Guardsman told Politico.

It’s not clear from the report why the Guardsmen were told to move. One Guardsmen speculated it was due to a complaint that some were not wearing face masks. But the Guardsmen told Politico that face masks are being worn at all times unless Guardsmen are eating or drinking.
Democrats have spent the past several days hyping the apparently non-existent threat of continued violence at the Capitol. The riot that lasted a few hours was bad, indeed, but sustained mob violence appears to be a hallmark of the political left, not the right.

They’re “stupid bastards” as far as Biden is concerned, so don’t expect him to give a shit.

Biden also intends to increase the price of prescription drugs including insulin, 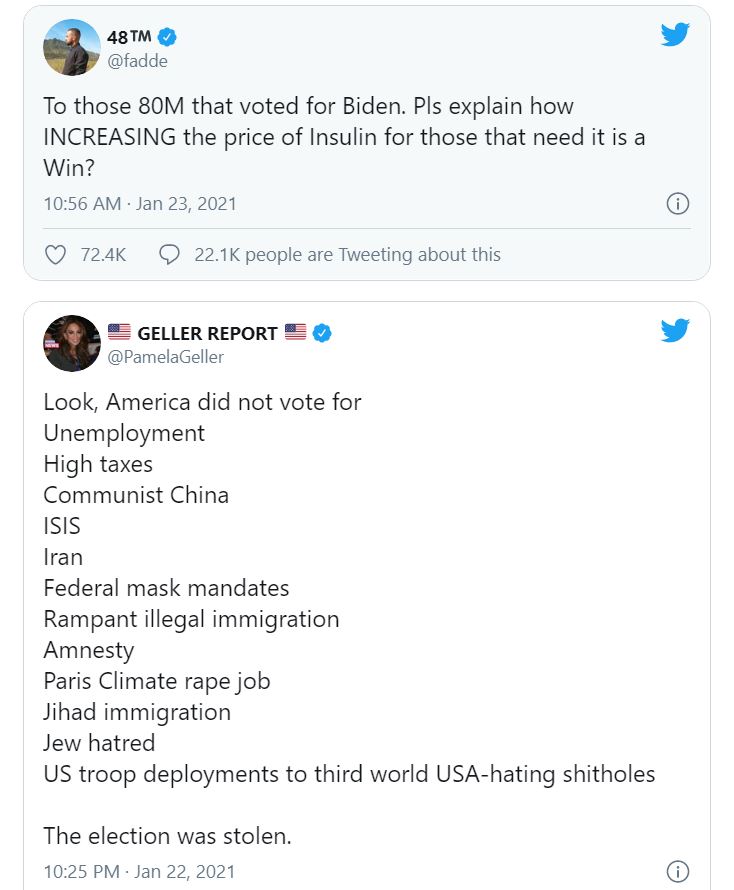