Welcome back to the country you hate, Griner.

In remarks before 9:00 a.m. on Thursday, Joe Biden announced that his administration had negotiated a prisoner swap to free WNBA player Brittney Griner from a Russian penal colony in exchange for Russian arms dealer Viktor Bout who is also known as the “Merchant of Death.”

Bout was roughly 11 years into a 25 year U.S. prison sentence for his actions that included a conspiracy to kill Americans, provide material support to terrorists, and traffic anti-aircraft missiles. But now he’s free in the one-for-one prisoner exchange between the U.S. and Russia that apparently secured the safe return of Griner who was arrested, charged, and convicted in Russia for drug smuggling and possession after she brought vape cartridges containing cannabis oil into the country. Griner was given the maximum 9-year sentence by a Russian court.

……Notably, the Biden administration’s prisoner swap did not include the release of former U.S. Marine Paul Whelan, who was arrested in Russia in 2018 and charged with espionage before receiving a 16-year sentence in 2020. Apparently the Biden administration decided freeing the “Merchant of Death” was worthwhile to free a WNBA player, but not a U.S. veteran — a fact that some, including Rep. Michael Waltz (R-FL), pointed out as the news broke.

She checked all the requisite boxes for Biden’s approval; anti-America, gay, and black.

The irony in all this is a statement she made just before her guilty plea:

“On the 4th of July, our family normally honors the service of those who fought for our freedom, including my father, who is a Vietnam war veteran. It hurts thinking about how I usually celebrate this day because freedom means something completely different to me this year.”

This was the same punk who refused to stand for the national anthem:

Griner told the sports media, “I honestly feel we should not play the national anthem during our season. I think we should take that much of a stand.”

Even if the league decided to play the anthem, Griner said she was going to stand with others against the country anyway.

She should have been left to rot in Russia.

Biden is right on par with Obama. He traded five of the worst muzzie cutthroats at GITMO for a deserter. They picked up where they left off.

This is Viktor Bout, the man Biden traded for Brittney Griner pic.twitter.com/dHAmebshW0

And this:
NBC News Quietly Scrubs Initial Detail On Brittney Griner To Back White House’s Version Of Events: 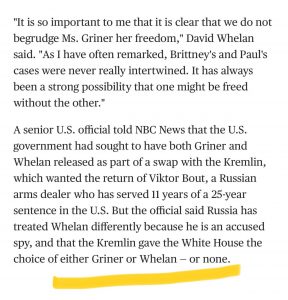 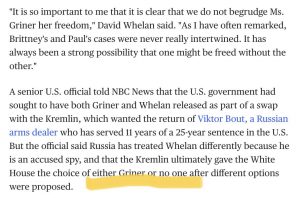