Remember when Obama traded five of the worst muzzie cutthroats at GITMO for a deserter? They picked up where they left off. 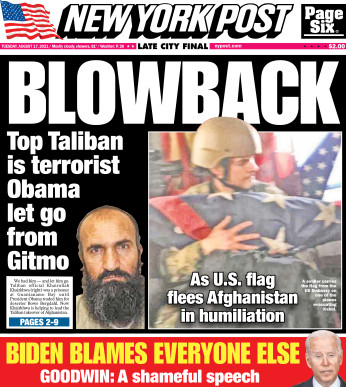 When Barack Obama released five Taliban commanders from the Guantanamo Bay prison in exchange for an American deserter in 2014, he assured a wary public that the dangerous enemy combatants would be transferred to Qatar and kept from causing any trouble in Afghanistan.

In fact, they were left free to engineer Sunday’s sacking of Kabul.

Soon after gaining their freedom, some of the notorious Taliban Five pledged to return to fight Americans in Afghanistan and made contacts with active Taliban militants there. But the Obama-Biden administration turned a blind eye to the disturbing intelligence reports, and it wasn’t long before the freed detainees used Qatar as a base to form a regime in exile.

Eventually, they were recognized by Western diplomats as official representatives of the Taliban during recent “peace” talks.

Earlier this year, one of them, Khairullah Khairkhwa, actually sat across the table from President Biden’s envoy to Afghanistan, Zalmay Khalilzad, in Moscow, where Khairkhwa was part of the official Taliban delegation that negotiated the final terms of the US withdrawal. The retreat cleared a path for the Taliban to retake power after 20 years.

“I started jihad to remove foreign forces from my country and establish an Islamic government, and jihad will continue until we reach that goal through a political agreement,” Khairkhwa said at the summit.

After raiding the presidential palace in Kabul, a group of armed Taliban fighters told Al Jazeera that they were arranging to bring back their Gitmo-paroled leadership from Qatar upon securing the capital. One unidentified fighter, who blasted America for “oppressing our people for 20 years,” claimed he had also been locked up at the Guantanamo Bay facility. It’s more evidence that Gitmo catch-and-release policies facilitated the fall of Afghanistan to the enemy that Washington vowed to crush after 9/11.

The mastermind of the regime change is former detainee Khairkhwa, the Taliban mullah whom Obama released from Gitmo even though the Pentagon classified him as too dangerous to release.

Thanks Obama. You ratfuck.