Dozens of retired military generals are speaking out against this feckless idiocy.

Infuckingcredible. Biden needs to be dragged off and shot. He’s just as corrupt as Obama and just as feckless.

……The State Department confirmed Tuesday that the Biden administration would “not sanction Russian participation in nuclear projects that are part of resuming full implementation” of a new deal with Iran. In effect, Washington is guaranteeing Moscow a multibillion-dollar payout. Congress should stop President Joe Biden from throwing Putin this financial lifeline while he maims and kills innocent civilians.

Team Biden has been negotiating the revival of a weaker, shorter version of the Iran agreement, formally known as the Joint Comprehensive Plan of Action, since last year. It’s allowed Russia an outsized role in the talks, with the country’s head delegate, Amb. Mikhail Ulyanov, providing frequent public updates. In one instance, Ulyanov praised Tehran’s negotiating style, candidly stating, “Iran got much more than it could expect.”

While Russia’s gambit may seem part of the standard give-and-take of negotiations, Moscow’s real motive was financial. As Putin and his oligarchs start to feel the pain of Ukraine sanctions, Russia can’t afford to miss out on a major payday in Iran. Hidden in the 2015 nuclear deal is tacit permission for Russia to expand Iran’s Bushehr nuclear power plant, a project worth some $10 billion to the Kremlin.

Tehran reportedly owes another $500 million to Russia’s state nuclear agency, Rosatom, for past work. Rosatom is the entity Russia has installed to assume operational control of Ukrainian nuclear power plants — most recently the largest plant in Eastern Europe, the Zaporizhzhya facility, as well as the shuttered Chernobyl plant — after Moscow’s irresponsible shelling and takeovers of the facilities.

As recently as a week ago, Team Biden was considering sanctions against Rosatom for its role in the Ukraine conflict. But when Moscow threatened to scuttle the Iran talks in retaliation, the administration quickly backed down.

Russia may also try to use Iran as a financial conduit to evade Ukraine sanctions. A revival of the nuclear deal would remove most US sanctions against hundreds of Iranian banks, companies and individuals. If sanctioned Russian banks, companies or individuals trade or transact with newly unsanctioned Iranian counterparts, the Biden administration could not “re-sanction” the Iranian entities for doing business with Russia — it would be a violation of the JCPOA.

His handlers are running the domestic and foreign policy agendas. He literally has no fucking idea of what he’s doing.

Watch at 2:38 into the video.  This mush for brains might be going to Europe to represent the U.S. in a meeting with NATO over Ukraine.

Meanwhile, our adversaries are laughing their asses off. 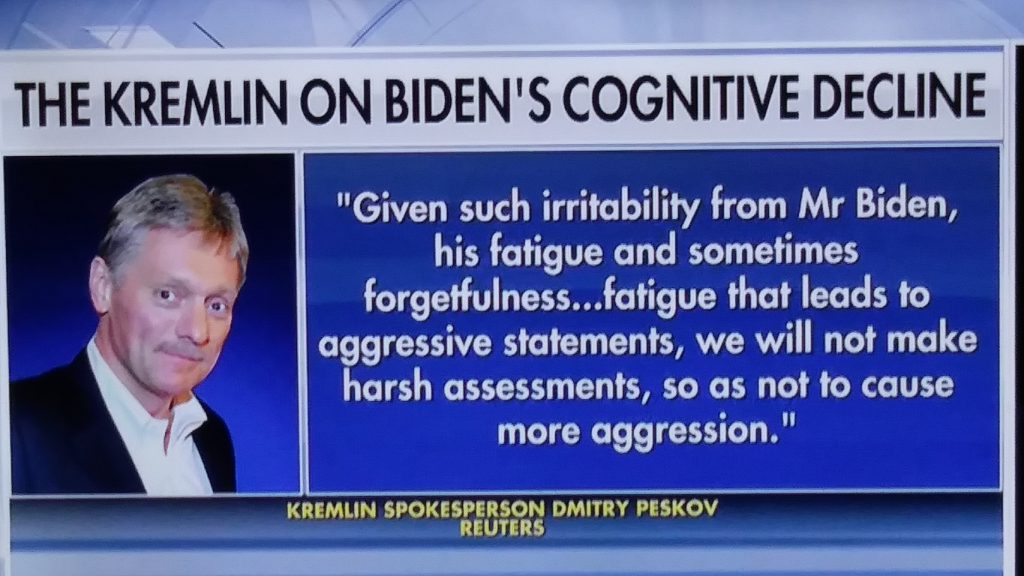