The authenticity was established a while ago.  The rest of the leftie media still won’t admit it.

It was once routine that damning reports about the president published by The New York Times would lead nearly every news program. That is no longer the case, at least under Biden.

The Times ran a lengthy story Wednesday diving into the Justice Department’s ongoing investigation of Biden’s son Hunter and how a grand jury is still collecting witness testimony and records regarding his business dealings overseas. The Times also verified the explosive emails first published by the New York Post in October 2020, just weeks before the presidential election, that implicated then-candidate Biden despite public denials he had anything to do with his son’s finances.

Since Wednesday evening, the Times’ report has received zero attention on the five major networks.

ABC, CBS and NBC made no mention of Hunter Biden on their morning and evening newscasts on Thursday or Friday, according to Grabien transcripts. Neither CNN nor MSNBC dedicated time to the ongoing scandal despite being 24-hour news networks.

In November, the five networks similarly avoided another Times report that alleged an investment firm that counts Hunter Biden among its founders helped a Chinese company purchase one of the world’s most lucrative cobalt mines from an American company while his father was vice president, renewing concerns about potential conflicts of interest and whether the now-current president had any knowledge about his son’s business dealings, which he had previously denied.

The legacy media collectively disregarded the reporting from the New York Post that shed light on Hunter Biden’s questionable financial ties, suggesting it was all a right-wing conspiracy or that it was the product of “Russian disinformation.”

CNN’s top executives, including then-president Jeff Zucker and political director David Chalian, were caught telling staff on a conference call they were spiking the Post’s reporting on Hunter Biden, according to leaked audiotapes published by Project Veritas.

In the days leading up to the 2020 election, personalities on CNN, MSNBC, CBS and NBC all downplayed the Hunter Biden scandal while ABC News completely ignored the story, according to a study.

The WaPo chimes in with this: 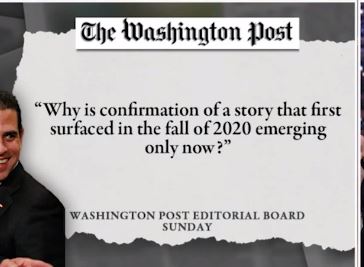 Look in the mirror, assholes.
The Bidens relied on ‘plausible denial‘ in case they got caught.
I watched Tucker Carlson’s interview with Tony Bobulinski and I was struck by the common denominator between the Bidens, Clintons, and Obama; their brash hubris and blithe attitude toward ethics, law, and the Constitution.
If that laptop belonged to the son of a Republican president, the liberal media conglomerate would have spent every waking minute covering the contents and the DOJ would have been all over it like stink on shit. The FBI also buried the evidence to protect the Biden’s.

Hunter Biden also tried to enlist the help of John Kerry’s daughter to leverage Burisma’s reputation at the State Department during corruption investigations in Ukraine.  At the same time, Joe Biden Biden demanded that the prosecutor investigating Burisma be fired or Ukraine would not receive 1 billion dollars in aid.

Joe Biden is ass deep in this corruption.  Hunter was operating as a bagman for the Big Guy, collecting and funneling money to his father.

The evidence collected from Hunter Biden’s laptop is more than enough to indict and convict Joe, Hunter, and most of the immediate family. But we know that won’t happen.  There’s one set of rules for Dems, another set of rules for everyone else.