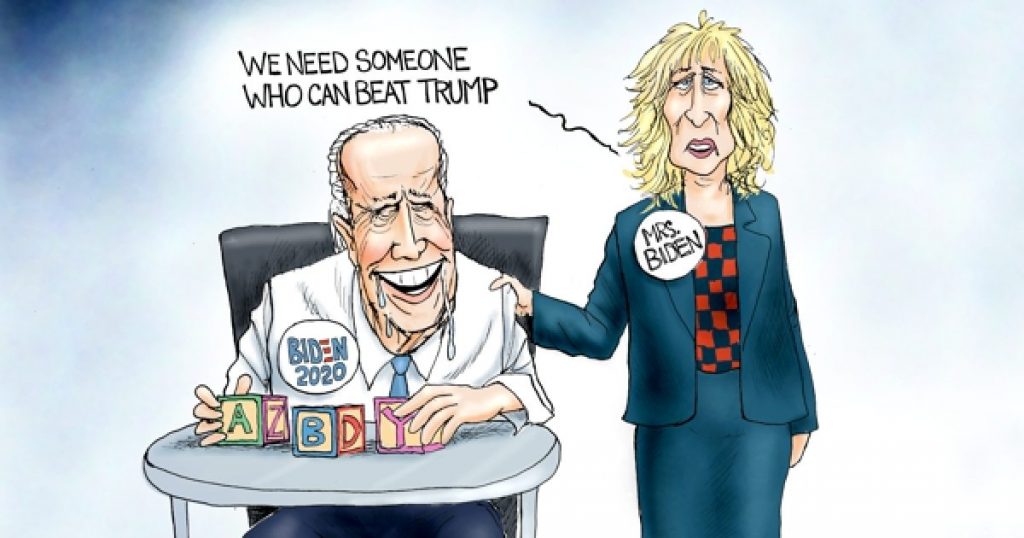 When on the world stage with his peers at the G7 summit this weekend, Joe Biden had several mental lapses and gaffes. At one point, fellow world leaders openly laughed at Biden over his forgetfulness at the G7 conference in Cornwall, England.

During a press conference on Sunday, Biden stumbled while speaking about Russia ahead of his June 16 meeting with Russian President Vladimir Putin in Geneva, Switzerland.

“We can work together with Russia – for example, in Libya. We should be opening up the passage to be able to go through, provide food assistance, and economic… I mean, vital assistance to a population that’s in real trouble,” Biden said, confusing Libya with Syria. Biden confused Libya for Syria on two more occasions in his meandering diatribe.

Previously, first lady Jill Biden proclaimed that her husband was “so well prepared” for the conference.

“He’s been studying for weeks working up for today,” she said. “He knows most of the leaders that will be here. Joe loves foreign policy. This is his forte.”

Time magazine was ridiculed last week for an extremely flattering cover featuring an illustration of Biden appearing years younger and a headline that read, “Taking on Putin.”

Biden already said he won’t hold a joint press conference with Putin because he doesn’t want to get “diverted” by who “talked the most.”

Also during the presser, Biden said, “I’m sorry, I’m going to get in trouble with staff if I don’t do this the right way,” before selecting Bloomberg to ask him a question. At a prior press conference at the White House, Biden was using a “cheat sheet” to determine which reporters to call on.

When asked a question by the press, Biden responded in a strange whispering voice, “120 days, gimme a break. I need time.”
……Biden delivered a befuddling comment during the presser, saying, “COVID, I know you all know, but a lot of people may not know what COVID is, that is a system whereby they’re going to provide funding for states to get access to vaccines.”

……U.K. Prime Minister Boris Johnson introduced the leaders, who were not G7 members, “Welcome, those who have just joined us, we have some pretty spectacular weather. We have Prime Minister Modi [India], President Ramaphosa [South Africa], President Moon [South Korea] in just a minute.”

A confused Biden interrupted Johnson to inform him that he didn’t introduce Ramaphosa, despite Johnson introducing the president of South Africa literally seconds earlier.

“And the president of South Africa,” Biden said, who was sitting next to Johnson.

Johnson replied, “And the president of South Africa as I said early on.”

The world leaders laughed at Biden’s forgetfulness at the G7 roundtable. Then the press was rushed out of the room.

There was another awkward moment during the G7 conference when Biden was walking through a section and was asked a random and easy question, “How are your meetings going in Cornwall, Mr. President?”

Jill Biden quickly interrupted the impromptu question, and frantically said, “Joe, c’mon,” as she waved her hands for him to come with her, which elicited laughter from the people nearby. She then grabbed his hand and lead him away.

Biden’s wife has to accompany him everywhere, including the latrine.

He is having trouble keeping up with everything at the summit, which is not a good impression for our allies, let alone our enemies.

Vladimir Putin challenged Biden to a live stream debate because he knows Biden’s brain is dissolving into mush.  The White House handlers turned it down, saying that Biden was “quite busy”, and didn’t have the time.

Biden’s mind often goes wandering off without a chaperone.  He can’t focus even with a teleprompter. That happens with dementia. His aides have a full-time job trying to get him to stick with the script.

It’s time to implement actions under the 25th Amendment.