Big Pharma CEOs are cashing in by the billions off of the vaccines:

After the World Health Organization declared COVID-19 a global pandemic on March 11, stock markets collapsed around the globe and the Dow recorded its worst sell-off since 1987. While markets have rebounded somewhat, one group of companies never got hit and have instead steadily risen: publicly traded healthcare outfits hard at work on vaccines, treatments and testing kits. Shares of these companies, which are doing work desperately needed to defeat the virus, have seen a remarkable surge in the past seven weeks — creating a new billionaire and boosting the fortunes of at least nine more.

The most notable winner is new billionaire Stéphane Bancel, the CEO of Cambridge, Massachusetts-based Moderna, which was the first company to begin human trials of a COVID-19 vaccine on March 16 in Seattle. When the WHO declared a pandemic, Bancel’s estimated net worth was some $720 million. Since then, Moderna’s stock has rallied more than 103%, lifting his fortune to an estimated $1.5 billion. A French citizen, Bancel first joined the billionaire ranks on April 2, when Moderna’s stock rose on the news that the firm was planning to begin phase two trials of its vaccine.

……The ten billionaires hail from seven different countries, with only two Americans: Leonard Schleifer and George Yancopoulos of Tarrytown, New York pharmaceutical firm Regeneron. Here are the ten healthcare billionaires who have gotten richer since March 11, thanks to their ties to companies battling the COVID-19 pandemic: 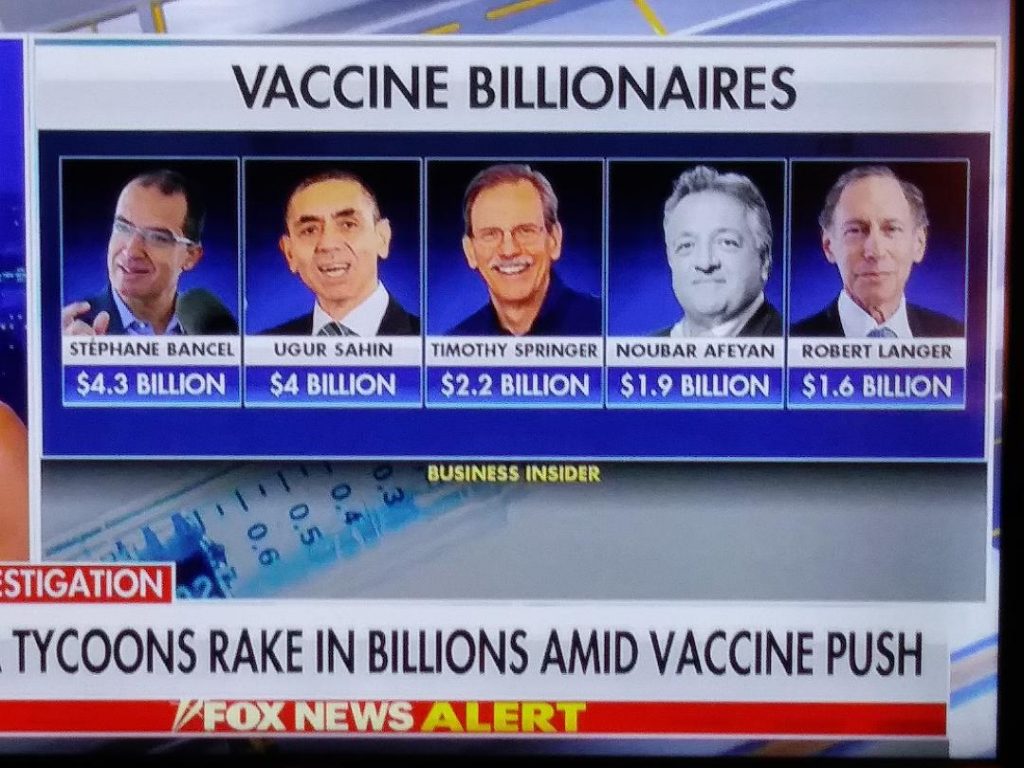 Ugur Sahin, the CEO and co-founder of German vaccine maker BioNTech, which worked alongside Pfizer on its COVID-19 vaccine. Sahin is now worth $4 billion.

Timothy Springer, an immunologist and founding investor of Moderna, who is now worth $2.2 billion.

Noubar Afeyan, Moderna’s Chairman, who is now worth $1.9 billion.

Juan Lopez-Belmonte, the Chairman of ROVI, a Spanish biotech company with a deal to manufacture and package the Moderna vaccine, who is now worth $1.8 billion.

Robert Langer, a scientist and founding investor in Moderna, who is now worth $1.6 billion.

Zhu Tao, a co-founder and chief scientific officer at Chinese vaccine maker CanSino Biologics, who is now worth $1.3 billion

Qiu Dongxu, a co-founder and senior vice president at CanSino Biologics, who is now worth $1.2 billion

Mao Huinhoa, also a co-founder and senior vice president at CanSino Biologics, who is now worth $1 billion

No wonder they wanted to push the vaccines.