If the worthless RINO’s had done something about Section 230 this wouldn’t be happening.

Amazon is booting social media platform Parler off its web hosting service Amazon Web Services (AWS), which will knock the platform offline on Sunday until it can find a new host.

Amazon says that c0ntent on the social media site violates its terms of service, adding that it does not believe Parler has a good strategy for cracking down on speech on its platform, according to an email obtained by BuzzFeed News.

“Recently, we’ve seen a steady increase in this violent content on your website, all of which violates our terms,” said Amazon in its email to Parler. “It’s clear that Parler does not have an effective process to comply with the AWS terms of service.”

“It also seems that Parler is still trying to determine its position on content moderation,” the email added. “You remove some violent content when contacted by us or others, but not always with urgency.”

……“[W]e cannot provide services to a customer that is unable to effectively identify and remove content that encourages or incites violence against others,” the email added. “Because Parler cannot comply with our terms of service and poses a very real risk to public safety, we plan to suspend Parler’s account effective Sunday, January 10th, at 11:59PM PST.”

Parler is already home to several Republican lawmakers and high-profile figures in conservative media, as well as members of President Donald Trump’s family.

Amazon’s decision to ban Parler from its web hosting service arrives in the wake of Google and Apple banning Parler from their app stores — effectively excluded the app from Android and iPhone smartphones.

Amazon, Google, and Apple’s decision to ban Parler arrive on the heels of Twitter permanently banning President Trump from its platform, as well as Facebook and Instagram locking the president out of his accounts “indefinitely.”

“Sunday (tomorrow) at midnight Amazon will be shutting off all of our servers in an attempt to completely remove free speech from the internet,” said Parler CEO John Matze in a statement. “There is the possibility Parler will be unavailable on the internet for up to a week as we rebuild from scratch. We prepared for events like this by never relying on Amazon’s proprietary infrastructure and building bare metal products.”

“We will try our best to move to a new provider right now as we have many competing for our business, however Amazon, Google and Apple purposefully did this as a coordinated effort knowing our options would be limited and knowing this would inflict the most damage right as President Trump was banned from the tech companies,” continued Matze.

“This was a coordinated attack by the tech giants to kill competition in the market place,” the CEO added. “We were too successful too fast. You can expect the war on competition and free speech to continue, but don’t count us out.”

Twitter and Facebook have been conduits for left-wing extremists to vent their hatred and violence toward President Trump and his supporters. This Dem-inspired mob has flourished for over a decade.

This has nothing to do with the Save America/Stop the Steal protest at the capitol. It’s merely an excuse for them to carry out the mass censorship they’ve been planning for a while.

In 2019, the Big Tech oligarchy—Google, Microsoft, Facebook, Twitter, and YouTube—created a world-wide ‘global censorship database’. They are the arbiter of what gets said in social media and what gets suppressed.

Dem politicians and their media tools fostered, praised, and encouraged the Occupy, Antifa, and BLM thugs. Now that a few of the tens of thousands of patriots who attended the Save America protest busted into the hallowed halls of corruption—Congress—thery’re all about outrage. Fuck them.

Jack Dorsey celebrated the Parler ban, and got some much-deserved backlash: 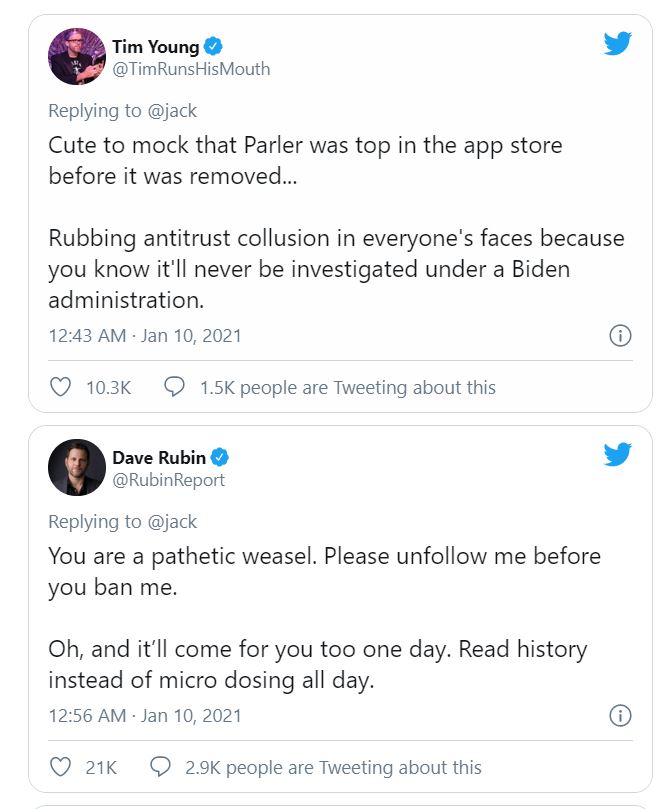 As one poster pointed out, this is how it started:

This is how it ends: 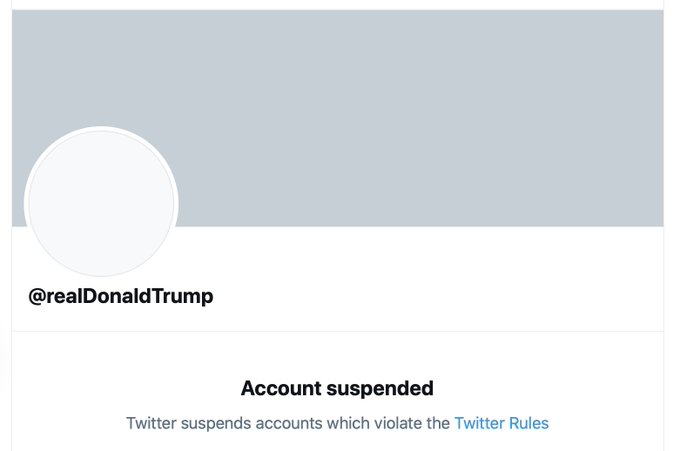 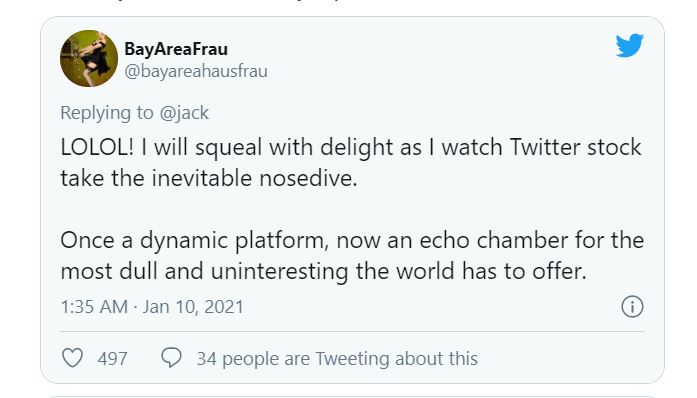 Conservatives, Libertarians, and free speech advocates have been defunded, deplatformed, and dismissed by mainstream media and Big Tech bullies.  Parler CEO John Matze stated that he will take full legal action against the Big Tech companies.

The best course of action is to follow the example of Gab.  The website maintains its own platform with its own servers; thereby avoiding censorship by cloud hosting companies.  Gab’s traffic is up by 753% since the Big Tech crackdown on free speech.

We are moving to self-hosted sites with private servers. The Big Tech Silicon Valley assholes won’t be able to do a thing about it.

And we will fight on.