So much for the the ‘blame the Tea Party‘ meme. Sirota’s wet dream of a “white American’ just got trounced. 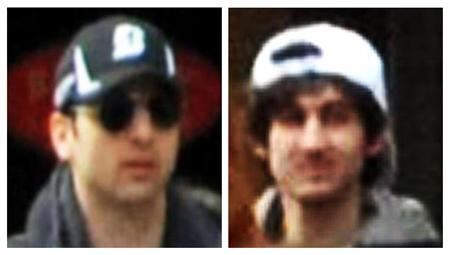 The terrorists have been identified as muslim brothers from Chechnya.

The one in the black hat is tits up, the surviving one in the white hat is identified as Dzhokhar A. Tsarnaev, 19, of Cambridge, Mass.

UPDATE:  The dead brother is ID’d as Tamerlan Tsarnaev, who was killed in the shootout with police.

The Smoking Gun has a photo of the dead muzzie Tamerlan.

Cops have surrounded a house where the surviving muzzie may be holed up:

Multiple explosions echoed from inside a house as police in Boston massed inside a perimeter set up to contain the remaining suspect in the Boston Marathon bombing.

The situation was fluid, and the latest development came in the city’s Watertown section after a chaotic night of mayhem that included the murder of a Massachusetts Institute of Technology police officer and a shootout with police, authorities said early Friday.

Police believe the two suspects from Monday’s terror attack are brothers, possibly from Chechnya, according to sources who spoke to Fox News. The man on the loose was identified as Dzhokhar A. Tsarnaev, 19, of Cambridge, Mass. They are believed to have been here for ‘several years,’ sources said.

Schools are closed, train and bus service is suspended and police were telling residents of neighborhoods including Cambridge, Waltham, Watertown, Newton, Arlington and Belmont to stay indoors. Police have formed a wide perimeter and believe the suspect is on foot, armed and dangerous, inside.

“Suspect No. One is dead, Suspect Two is on the run,” Massachusetts Gov. Deval Patrick said at a Friday morning press conference. “There is a massive manhunt underway.”

The dead suspect, Tamerlan Tsarnaev, was shot multiple times in a gunfight with police Thursday night and pronounced dead at a hospital.

Oh, and BTW:
Chechnya is saturated with Islamic terrorists.

Chechens are an ethnic minority living primarily in Russia’s North Caucasus region. For the past two hundred years, they have generally been governed by Moscow, though they have had varying degrees of de facto autonomy. After the fall of the Soviet Union, Chechen separatists launched a coordinated campaign for independence, which resulted in two devastating wars and an ongoing insurgency in Russia’s republic of Chechnya. Militants in and around Chechnya continue to agitate for independence, though the death of separatist leader Shamil Basayev in July 2006 weakened the separatist movement. However, violence in the North Caucasus has escalated since 2008, and Moscow experienced its most serious attack in six years with the bombing of a metro station in March 2010.
The Chechens are a largely Muslim ethnic group that has lived for centuries in the mountainous North Caucasus region. For the past two hundred years, Chechens have resisted Russian rule. During World War II, Soviet leader Joseph Stalin accused the Chechens of cooperating with the Nazis and forcibly deported the entire population to Kazakhstan and Siberia. Tens of thousands of Chechens died, and the survivors were allowed to return home only after Stalin’s death.

They’ve had military training and knew what they were doing.  They had help, either from more muslim terrorists here in America, or in a muslim-controlled foreign country. Probably both.

The elder Tsarnaev insisted that his sons were innocent, but said he would appeal to his son to “surrender peacefully.”

“Give up. Give up. You have a bright future ahead of you. Come home to Russia,” the dad said.

The father warned, however, “If they killed him, then all hell would break loose.”

“All hell”….more muzzie atrocities, no doubt.

One of two suspects in the Boston Marathon bombing is dead, the other on the loose and large parts of the city are on virtual lockdown after a chaotic night of mayhem that included the murder of a Massachusetts Institute of Technology police officer and a shootout with police, authorities said early Friday.

The two men believed to be the suspects from Monday’s terrorist attack apparently surfaced just hours after the FBI released their imaged late Thursday afternoon, shooting the police officer, robbing a convenience store, carjacking a man who later escaped and engaging in a wild shootout with Boston police, in which they hurled explosives from their stolen car.

Boston Police Commissioner Ed Davis said on Twitter that one of the two suspects was killed and that the at-large suspect, labeled by the FBI as “suspect two” in the marathon bombing, was “armed and dangerous.”

Both suspects, who sources say are brothers had lived in the U.S. for at least a year.